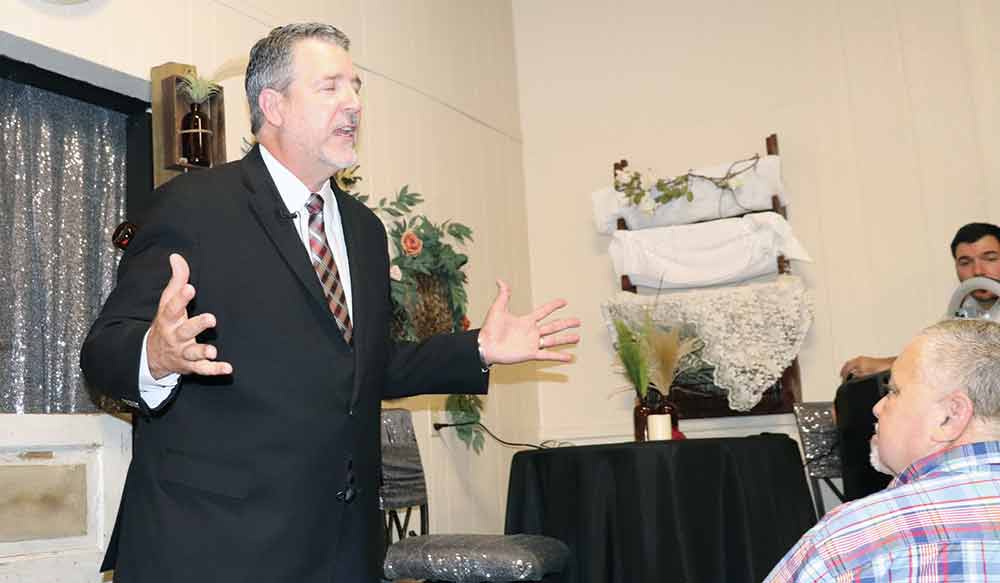 Tyler County Judge candidate Neil Alderman spoke to a crowd last Tuesday as he made public his intention to run for office. CHRIS EDWARDS | TCB

Alderman, who did not file in the party primary, is running as a Republican write-in candidate. Before a room-filling crowd, he spoke on a variety of topics, and opened up about himself and his impetus to run for office.

Alderman spoke of his longtime friendship with current County Judge Jacques Blanchette, whom he said he has known for 35 years.

He said Blanchette, who announced last year that he was not seeking re-election, was “one of the reasons” why he decided to run.

Alongside his work as a consultant with his business, the Synergy Group, Alderman has also been involved in activism as it pertains to local issues, primarily with the Facebook platform “Concerned Citizens of Tyler County,” which he co-managed with Sal Baldovinos.

Alderman said at Tuesday’s event that he has bowed out of administrative duties with CCTC, due to ethical considerations involving his bid for the judge’s office.

“I would never want to harm that page’s credibility by making it a political platform,” he said. “I stepped down because I made the decision to do something for Tyler County,” he added.

One attendee was Melissa Riley, who ran in the Republican primary for the office, and lost in the run-off to Milton Powers by 36 votes.

Riley said she wanted to publicly endorse Alderman for the office. “While we may not have always seen eye to eye on certain issues, Neil is a savvy businessman who is respected throughout his industry.  I believe he will bring integrity, growth and transparency back to Tyler County. He will work tirelessly to bring industry into our county that will be for the betterment of our citizens,” she said.

In the lone competitive countywide race, voters have the option between Powers, who is running as a Republican; Democrat Wesley Whitman or Alderman. Election Day is Nov. 8.