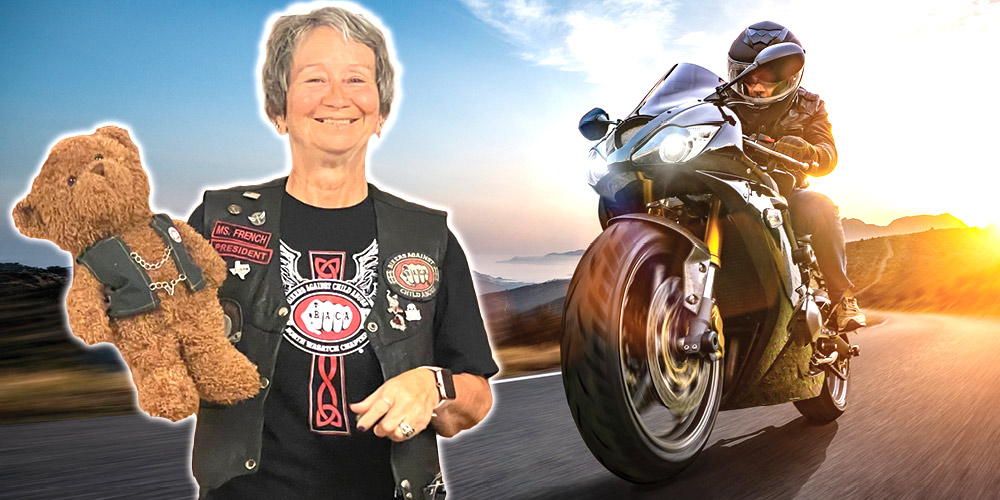 WOODVILLE – Woodville Lions heard Ms. French of BACA, Bikers Against Child Abuse, at their Thursday evening meeting at the Lions Den on July 14.

BACA is in most states and several countries and dedicated to supporting children from 5 to 17 who were victims of child abuse. They work with District Attorneys, Child Protective Services, CASA, and more.

“Ms. French” is her biker name, has been at this for years and is president of the Beaumont chapter that has about 25 members covering several counties. Because of her age and size, she just transitioned from a Harley to a Trike—she is less than five feet, yet large in spirit.

One must go through a lot of checks, including an FBI NCIC background check and over six months of training to get a patch on the back of their “kutte,” pronounced “cut.” The kutte originated from the club leather jackets that were “cut” in the summer to be cooler, the collar and sleaves removed, so the members could still wear their earned patches and other emblems. They look like a vest, only broader in the shoulders.

Like many biker groups, they are a family. Ms. French admirably outlined how they bring the child into their family: “once a BACA child, always a BACA child.”

When a child is adopted, BACA gives the child his or her own kutte. They are also given a special BACA teddy bear. One little girl wore her kutte to school and play and all around; she felt like she belonged, like part of a big family—and she was. She was BACA now.

One little 10-year-old boy was scared to come outside. After a few meetings with BACA, playing, crafts, support—listening, affirming—the little one ventured outside. Always having someone to listen to and “be there” for him, the life-giving affirmation invigorates.

BACA’s first-class brochure and website BACAWorld.org outline the history, vision, and teamwork with local law enforcement and the court social services. They are on-call, too. They confidently publish: “We do not condone violence or physical force in any manner, however, if circumstances arise such that we are the only obstacle to preventing a child from further abuse, we stand ready to be that obstacle.”

A child has to have gone through the legal process and be in legal custody. As all know, abuse is a life changer. Law cannot protect 24/7, and many children cannot afford therapy. A primary goal of BACA is to help the child feel safe, protected, because then they “are more capable and likely to tell the truth regarding their abuse. Threats made by an abuser are offset by the presence of dedicated and protective bikers that have now become family.”

Their code of honor includes standing with the child at their home or in the court or anywhere needed. As Ms French said, there was a sight to see with a little girl’s hand wrapped around the beefy finger of a big hairy biker—safe!

Not long ago, a young girl who was a victim in her early teens had to go to court when she was 22. Often, feelings regress to the trauma, the fear, the torment, and nightmares return. The now young woman struggles to gather her courage. No problem!

BACA backed her up in court, even willing to stand by her side as she was on the witness stand—once a BACA child, always a BACA child.