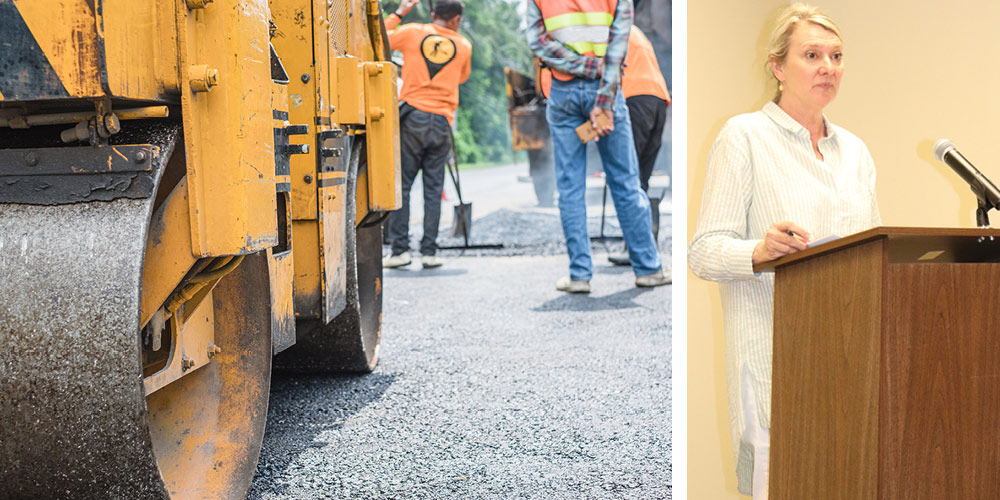 WOODVILLE – The Woodville City Council got down to business in its regular monthly meeting on Monday evening, and approved measures to move forward on a couple of grant-funded street improvement projects.

The first item on the agenda was a resolution to authorize an advanced funding agreement between the Texas Department of Transportation (TxDOT) and the city for two blocks of sidewalk improvements along US 69, stretching from the Exxon station to Dogwood Street.

The project was one of four submitted by the city for consideration, and the only one awarded funding, of $269K, according to City Administrator Mandy Risinger.

Risinger said the project was the first time the city had applied and received funding for such an undertaking and said it might bode well for the future for other possible projects.

For the next item on the agenda, council heard a presentation from Susan Stover, who works with David J. Waxman. The Waxman firm is working as the grant administrator for a CBDG grant-funded project for street improvements on Temple, from Peach to West Dogwood.

The city was awarded $350K for this project, and Stover briefed the council and Mayor Paula Jones on the definition of Section 3 businesses.

By the federal definition, courtesy of the Department of Housing and Urban Development, Section 3 businesses include at least 30% of full-time employees who are low and very low-income individuals, who receive housing assistance.

Stover said the city will have an opportunity to reach out to Section 3 businesses when it goes forth with the project. She said this is “a recommendation and a goal, but not a requirement.”

The council also approved a resolution to authorize signatories for the project. Jones, Risinger and City Secretary Terri Bible are the signatories.

Next on the agenda, the city approved an increase in the health department’s fees. The proposed increase, which was given to council, for consideration, by health inspector Colin Bishop, called for a 20-25% increase.

Bishop sent the proposal for consideration last month, and it was discussed, and tabled pending consideration and research.
Risinger and Bishop both noted that there had been no increase in the department’s fees since 2017, and even then, it was a minor raise.

Risinger said she had reached out to other cities in the region to see what their fees are for health department services, and said she discovered that most cities of Woodville’s size do not have their own health deparments. Many of them, she said, utilize county services, or work in cooperation with another health department.

Currently, the health department’s fees are “well under what anyone around us is charging,” Risinger said.