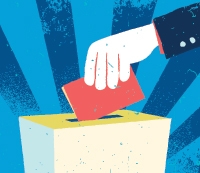 By Chris Edwards This email address is being protected from spambots. You need JavaScript enabled to view it.

Powers will face Democratic opponent Wesley Whitman in the November general election. The race for county judge was one of several that went into runoffs after the March primary.

The winner of the race will see a new face in the judge’s office for the first time in 16 years, as longtime county judge Jacques Blanchette announced his decision not to run for re-election last year.

The race for county treasurer, incumbent Leann Monk sealed the nomination for the GOP, with 1,566 votes to challenger Maegan Rains Odom’s 1,442 votes.

Monk is unopposed by a Democrat for the general election.

One more county race, that of Pct. 4 Justice of the Peace, went to the runoff, with incumbent Jim Moore facing challenger Henry Sawyer, Jr.

The total from early and absentee voters was 1,443 ballots cast.

All told, 3,086 voters turned out to vote in the runoff election.

Paxton was the projected winner at press time in a landslide with 67% of the votes Paxton will face Democratic primary winner Rochelle Garza in November.

In the Democratic runoff for Lieutenant Governor, Mike Collier was projected as the winner against Michelle Beckley with a 54.7% margin of victory.

All totals are unofficial until canvassed.