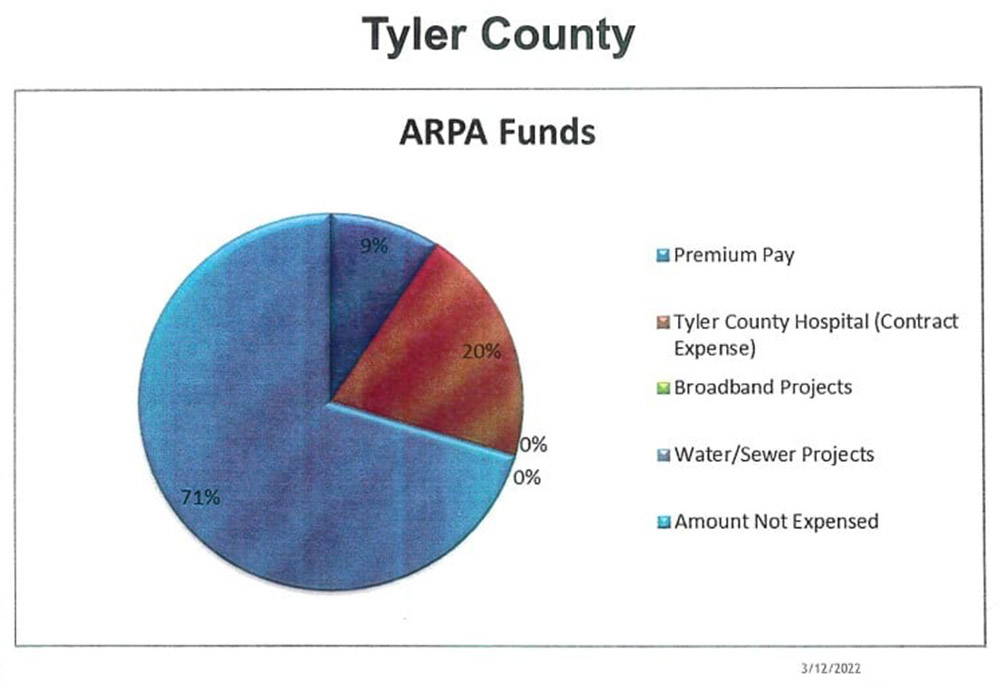 WOODVILLE – During Monday morning’s meeting of the Tyler County Commissioners Court, County Auditor Jackie Skinner made two presentations, one of which provided a breakdown of how the American Rescue Plan Act (ARPA) funds were allocated.

The county received its first allotment of the ARPA monies last year, the first of two disbursements. The first one was received last July, in the amount of $2,104,766. The second round will arrive this July.

The funds, which were allocated through a federal grant program, were designated to address emergency needs relating to losses stemming from the pandemic.

Skinner made the presentation so that the public could see the documentation as to how the funds were distributed. She used commissioners court minutes, emails and other documents to demonstrate the timeline and the fund distribution.

On some Tyler County-centered social media pages, posts have expressed concern about how the monies were disbursed, particularly with the distribution of $3,500 checks from the ARPA funds to elected officials.

All county employees were awarded premium pay from the funds, but the social media controversy hinges on the legality of giving the money to elected officials.

According to a certification of funds statement from Skinner, the funds can be used to support public health expenditures, address negative economic impacts caused by the pandemic, replace lost public sector revenue, provide premium pay for essential workers and to invest in infrastructure

Skinner said that County Judge Jacques Blanchette had asked the commissioners to table the item during an August 30, 2021, meeting for further study, as he had reservations about awarding the money to officials. Skinner said there was no communication from Blanchette about those reservations or about asking for legal opinions until after the fact, nor was anything said in commissioners court about anything being illegal at a Sept. 13, 2021, meeting.

Before she began the presentation, Skinner referenced the classic TV show Dragnet, and said she wanted to present “only the facts” with the information to follow.

Skinner said that last year when the county became aware of the funds, there was no understanding or knowledge of what the funds could be used for. “We wanted to get a jump on being ready to function and use this money to the best way we knew how,” Skinner said.

Skinner outlined the process from the commissioners approving a resolution to apply for ARPA to the acquisition of the funds, and how they were disbursed.

Skinner referenced a call from District Judge Delinda Gibbs Walker, during which Walker said Blanchette had alleged that Skinner had illegally allowed the officials to receive premium pay from the ARPA funds.

The interim ruling on ARPA funds, Skinner, said, provided no guidance stating that elected officials were not eligible.

“If I at any time I felt I was committing a criminal act, I never would have allowed it to happen,” Skinner said.

“I’m very disturbed at the way things have gone…I do know that empty chair there speaks volumes,” Hudson said.

Hudson also referenced the “bull crap” on Facebook being posted regarding the ARPA monies. “There really was no clear point on it,” Hudson said.

In further comments on Blanchette’s absence, he said “Why is this chair empty? It has been for three months, practically.”

During its Monday meeting, the Commissioners Court also approved the following items: