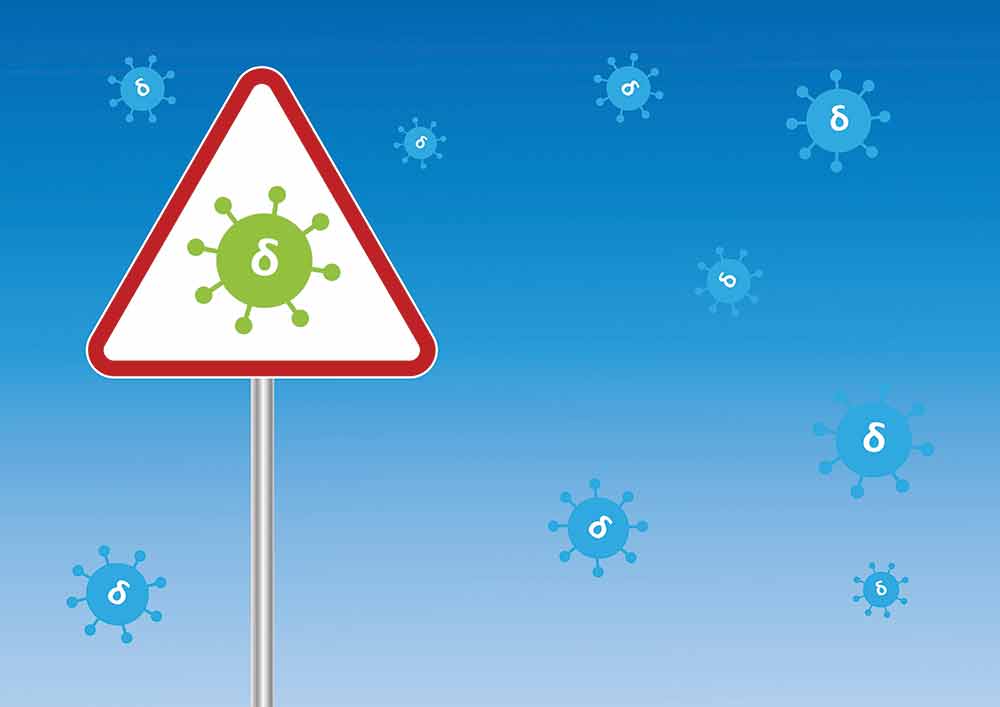 Jobe said that during the last two weeks, the county has gone from 0-3 active cases per day to more than 35 actives. However, Jobe said his office has had no confirmation as to whether these cases are of the new delta variant of the virus.

Jobe’s office also began providing updates on active case counts again. As of last Thursday, the county has 91 active, up from the previous week count of 38. Since reporting began last year, Tyler County has had 1,453 confirmed cases of COVID, with 1319 recoveries and 43 deaths.

Jobe said the sort of tests needed for variant type are requested and performed by labs at the state’s request, but it is, he said, safe to assume they are of the Delta variant based on its widespread nature.

Nationwide, the delta variant, which was first identified in India, is rapidly spreading. In an Associated Press report earlier in the week, Dr. Rochelle Walensky, the director for the Centers for Disease Control, said the country is at a “pivotal point” in the pandemic.

Walensky also reported that the delta COVID variant is one of the most infectious respiratory diseases that scientists have ever seen, and that those infected with it can carry up to 1,000 times more virus in their nasal passages than those who were infected with the initial strain.

Dr. Katelyn Jetelina, an epidemiologist with the University of Texas School of Public Health in Dallas, stated in a Texas Tribune story published on Tuesday, that the variant’s symptoms are similar to those of a common cold – headaches, sore throat, runny noses and fever, as opposed to common symptoms of the original COVID-19 strain, which include coughing and loss of smell.

Jetelina said the reason why the variant is more transmissible is due to proteins on the outer “spikes” of the virus. Also, a study cited by Jetelina from Scotland, found that the hospitalization rate for those who contracted the delta variant was about 85% higher than those fighting the alpha variant.

Jobe said the majority of the new cases the county has seen are individuals who have not been vaccinated. “Breakthrough cases of those vaccinated seem to be less than one-tenth of one percent,” he said. According to Jobe, there have been 6,000 of the county’s 21,518 residents vaccinated.

At the statewide level, health officials have expressed concern about stilled vaccination rates. As of Tuesday, about 43% of Texans had been fully vaccinated, which is below the national average rate of 48.8%, according to data from both the Texas Department of State Health Services and the CDC.

Jobe said he has been asked publicly and privately about the delta variant and the county’s number of cases, but also has fielded many questions about masks and lockdowns. “I have started wearing my mask again in public areas, both for me and those I might be around,” he said. “This is a personal choice.”

However, with regard to any statewide mandates, Jobe said he does not think the state or county government will require either, unless the disease “takes a major turn for the worst.”

At the state level, Gov. Greg Abbott banned local pandemic mandates, and said last week that he will not impose another statewide mask mandate.

Jobe did say that for anyone who feels they have been exposed to get tested. “The one request I have is that if you think you have been exposed, and feeling symptomatic, please get tested,” he said. “This could help prevent spreading to those who may not be as healthy as others.”

Residents have the opportunity to get vaccinated at coming clinics, free of charge. One, which is being conducted by the Jasper Newton County Public Health District, in partnership with The Keniesha Rochelle Beatty Memorial outreach and Pilgrim Rest Missionary Baptist Church, will have two dates, Saturday, August 14 and again on Saturday, Sept. 11.

Those clinics will take place at the Mayme R. Canada Brown Community Development and Education Center, located at 80 Cobb Mill Road in Woodville, and will last from 10 a.m. to 2 p.m. on both dates. The vaccine is available to anyone over the age of 18 who is not pregnant.

A free vaccine clinic is also scheduled in the city of Chester at the city hall on Wednesday, August 11 from 9 a.m. to 4 p.m. and again on Sept. 11, from 9 a.m. to 4 p.m. for the second vaccination. This will be an administration of the Moderna brand vaccine, and is conducted by the city, along with the State of Texas Department of Emergency Management, and will be administered by military personnel.