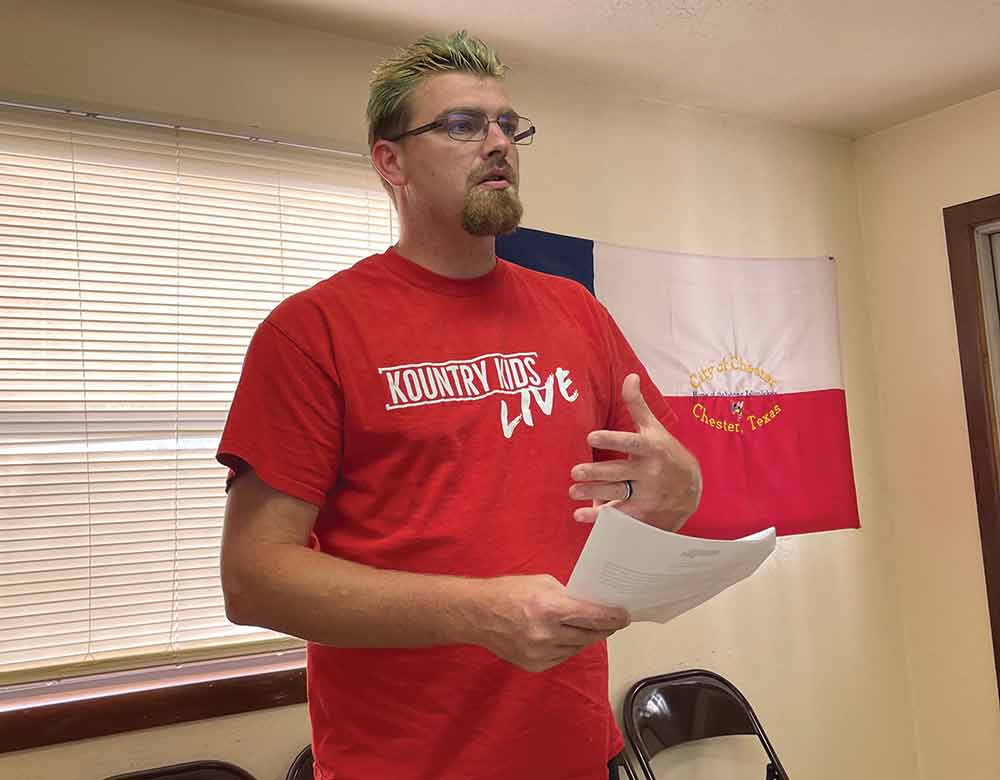 Representatives from the group included CW President Johnny Page and his wife Nancy; Secretary Jan Johnson and husband Lawrence and Glen Kenney, who serves as the group’s public relations. Chester Mayor Floyd Petri and Mayor pro-tem Robert Poynter have taken point on planning a community watch group for Chester, and Poynter will be the council’s lead.

Pct 2 Constable Casey Whitworth will be the lead law enforcement officer, saying he was honored to help in any way. Johnny Page pointed out that the sheriff’s office said the CW lowered the calls by 75 percent.

The Dam B Community Watch Group has been operating with great success for five years. They do patrols but stressed that they do not do any law enforcement, such as stopping vehicles. That was re-enforced by Poynter.

The whole goal was to serve the community. The Dam B group has been able to obtain a stop light at the dangerous Hwy 190/FM 92 intersection and established a substation for sheriff deputies to take a break and write reports. They meet weekly with strict membership rules. Tyler County encompasses more than 900 square miles, and Sheriff Bryan Weatherford has greatly appreciated this substation for his deputies in the farthest reaches of the county.

Poynter and Whitworth will be working the community to rally the first members and refine plans from the generous written plans that Dam B provided, and they will present their status at the next council meeting. Whitworth said he knew several already that were excited for this development. Poynter pointed out recent thefts and other mayhem that has been a constant concern. For several the crime is fearful. Kenney and Page noted how their patrols with the large signs on their cars, and cell phone cameras, provided a natural deterrent.

City park to be used for VBS group

Church in the Country Next Generation Pastor Kevin Hicks presented a request to Chester to use the Chester City Park for a stopping point for his travelling Vacation Bible School (VBS) that seeks to minister to all the kids in the county. He has bus specially outfitted, and their first stop will be Chester on July 27. Then he plans to do another in Ivanhoe, Colmesneil and Woodville. The travelling VBS will be free and provide activities and worship for pre-k through sixth grade.

Also, Hicks is planning a monthly children’s day at the Chester City Park that will include a whole day of fun with a huge water slide, all free, with some Christian programing. The council was excited to support Hicks, and Petri especially so, as he said his grandson loves water slides.

The council went into executive session, and on their return they made a motion to raise the salaries of the administrative officers by 3%. They approved an activity log that Councilman Doug Hughes would provide next week. The council approved a motion for the mayor to be able to supervise and, if necessary, fire employees, and Petri committed to finishing the employee handbook soon.

Petri had some very good news regarding another grant opportunity with the Texas Department of Emergency Management for infrastructure needs. A representative will be meeting with Petri, council members, and employees on Tuesday, July 12, and they will go over a wish list.

Poynter reported that the city park had some substantial improvements, including the road and other items, and more was on the way.