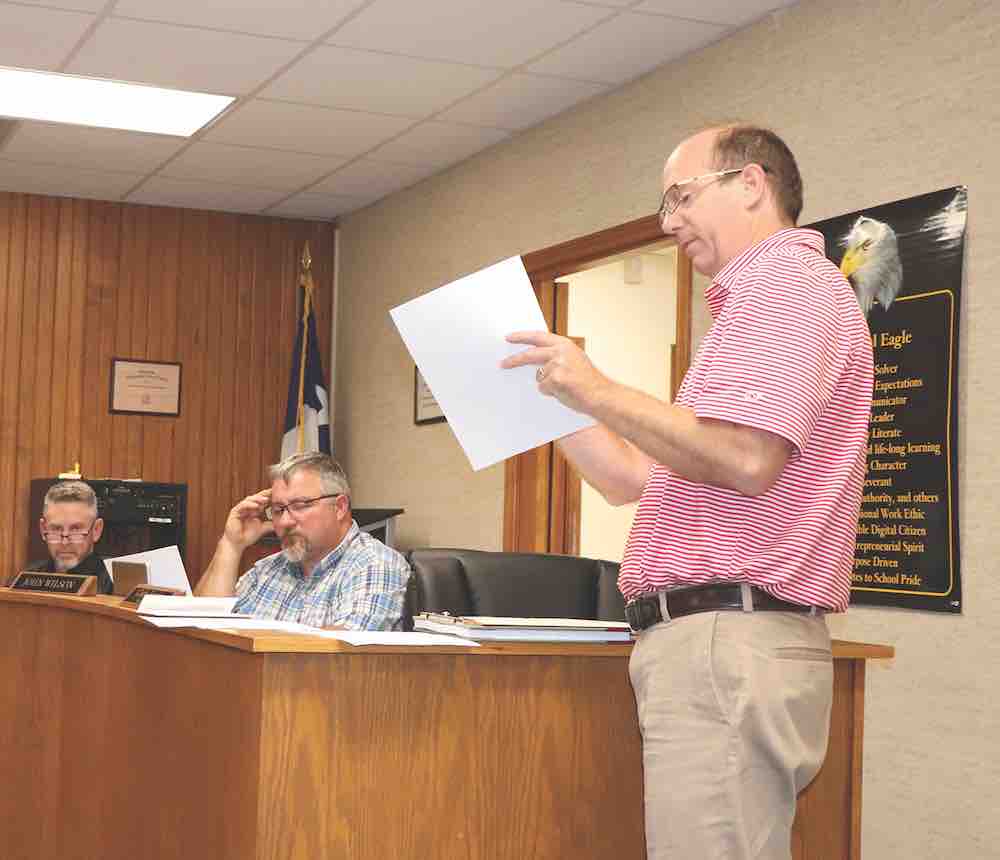 CHRIS EDWARDS | TCB WISD Business Manager Cody Jarrott discusses information for the board members to look at about possible salary schedules for the next school year.

WOODVILLE – The Woodville ISD Board of Trustees had a host of achievements to recognize among the faculty, staff and student body at its regular Monday night meeting.

Prior to moving the meeting to the board room in the WISD Administration Building for the regular agenda items, the meeting began in the community room in the cafeteria to accommodate the large audience of students, parents and well-wishers. The board recognized WISD athletes Kesean Paire and Linus Mannino for their achievements at the UIL State Track and Field Meet. Paire won the gold medal in the wheelchair shot-put event and Mannino took home a bronze medal in the high jump.

Lady Eagle powerlifter Natalli VonEssen was recognized for her achievement of placing eighth in the state in her sport.

The trustees also recognized Michelle Merchant on being named “3A Girls Assistant Coach of the Year” by the Texas Association of Basketball Coaches.

On to its regular agenda, the WISD trustees approved an interlocal agreement between the district and the board of directors of the Allan Shivers Library and Museum.

Superintendent Lisa Meysembourg spoke about the matter. She and trustee Josh McClure have served on the library board and have worked with the other board members to come up with a new interlocal agreement to help with administrative matters concerning the library, particularly since the death of longtime director Rosemary Bunch last year. The last document was signed in 1985, Meysembourg said. The City of Woodville recently entered into an interlocal with the library, as did the county.

The board approved a recommendation by Meysembourg to change its district-wide COVID-19 safety protocol of mask wearing.

Meysembourg said she feels “very confident” that it is time to lift the mandate, and make mask-wearing optional. There have been two active cases reported since spring break, and no active cases in the district for several weeks.

“I feel the community and school district have taken all of the necessary actions to prevent and mitigate the spread of COVID,” she said.

The lifting of the mandate was deemed effective immediately after its passage by the board.

The trustees approved an architectural firm, Goodwin-Lasiter-Strong, for long-range planning. The district went out for proposals earlier in the year from architects and construction managers and combed through them to review and rank the submissions to find the best fit for the district.

At the board’s April meeting, Meysembourg said that gathering the proposals and reviewing them was the first step toward whatever measures the district might need in the future, infrastructure/facilities-wise.