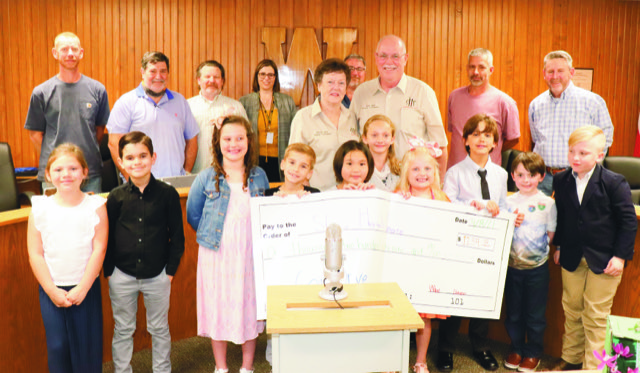 CHRIS EDWARDS | TCB Wheat Elementary students present a check to Brian and Deborah Smith of Sleep in Heavenly Peace. The students raised the money through a coin drive fundraiser.

WOODVILLE – At its regular monthly meeting, the Woodville ISD Board of Trustees discussed taking the first steps toward long-range planning involving its facilities.

The district recently went out for request for proposals from architects and construction managers and received eight submitted proposals. Superintendent Lisa Meysembourg said that in reviewing the materials and conducting interviews, it will be a matter of finding out who will be able to suit the district best. “This is the initial part of seeing what firm best fits the district’s needs,” Meysembourg said.

The board discussed the best method for reviewing the proposals and agreed to use a 10-day period for review, ranking and to schedule interviews on May 10.

Meysembourg emphasized that in gathering the proposals and reviewing them that was the first step toward whatever the district might need in the future; that there’s been no discussion of any expenditures concerning the facilities or other infrastructure concerns, and that needs might change years down the road.

The presentations by the second graders ranged from facts about flying squirrels to a discussion about what tigers eat. Stott said the students began their projects in March, with researching.

The GT students presented a check to the Woodville chapter of Sleep in Heavenly Peace, which builds beds for children who do not have beds to sleep in.

The GT students, through a coin drive fundraiser, raised more than $1,200 to give to the charitable organization. SHP’s Brian and Deborah Smith were on hand to accept the donation. Stott said the fundraiser was helpful in teaching financial literacy to the students.

On behalf of the WISD board, Vice President John Wilson said the students’ efforts made the board, faculty and parents of the district proud.

At its meeting, the WISD board also approved the following items: