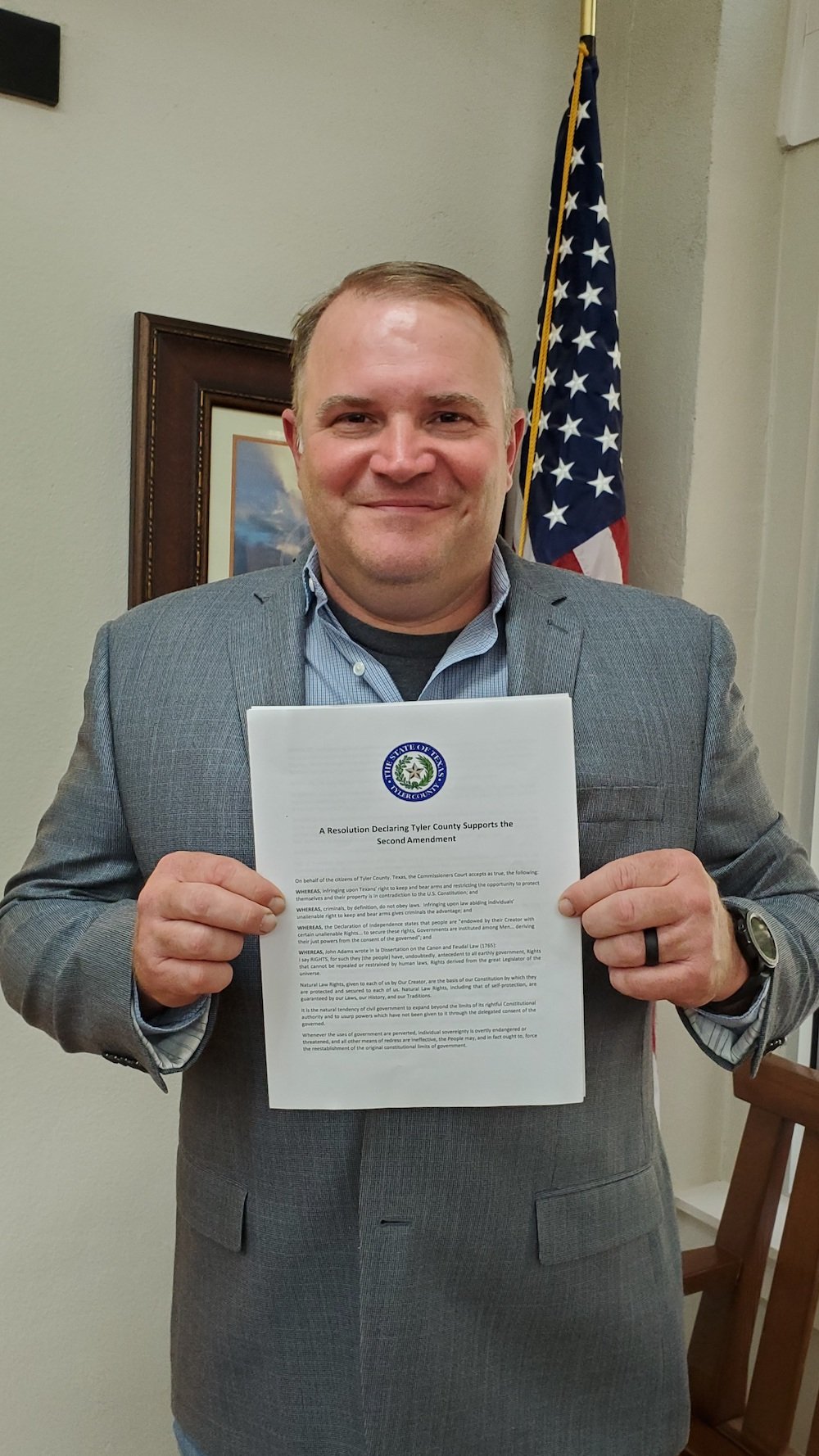 WOODVILLE – Before tackling its regular slate of agenda items for consideration, approval or informational purposes, the Tyler County Commissioners Court approved several resolutions. One of those resolutions, brought to the court by Pct. 1 Commissioner Joe Blacksher, declares the county to support the Second Amendment to the United States Constitution.

Blacksher said he was encouraged by an official from Montgomery County who drafted the resolution. He said it is likely Texas will become a 2A Sanctuary state.

Blacksher said he worked on the resolution with the support of District Attorney Lucas Babin and Sheriff Bryan Weatherford. After approving, Pct. 2 Commissioner Stevan Sturrock made it clear that he supports all amendments to the Constitution, to which Blacksher replied with his reasoning for bringing the resolution to the court – that the Second Amendment is frequently under attack.

“The Second Amendment of the U.S. Constitution states very clearly ‘The right of the people to keep and bear arms shall not be infringed,’” Blacksher said. “I want to assure the citizens of Tyler County where we stand on defending their right to bear arms.”

A Second Amendment sanctuary, or gun sanctuary, is a state, county or municipality that has adopted ordinances or resolutions opposing the enforcement of various gun control measures. Recently, the City of Chester adopted an ordinance naming it a Second Amendment sanctuary city (see story on page 2A.) At the state level, a new bill in the House (HB 1911) which was authored by Rep. James White (R-Hillister) would allow Texans to carry a firearm without a permit and has gathered support from lawmakers.

White issued a statement on the bill Tuesday, which featured testimony from several License to Carry instructors in support of the bill.

Opponents of the bill, according to White, claim that it would dismantle the state’s LTC law. “Experience shows that residents will continue to voluntarily seek out training and licenses in permitless carry states, recognizing the benefits of instruction as well as acquiring and maintaining a license,” White said.

In other business, on Monday, the commissioners approved a proclamation to recognize the month of April as Child Abuse Prevention Month.

Also, a pair of resolutions were approved by commissioners to submit a Texas Community Development Block Grant program application, and to authorize Judge Jacques Blanchette to serve as the county’s executive officer in submitting the CDBG grant application.