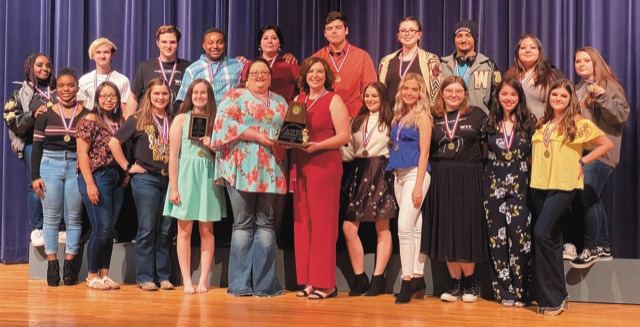 PHOTO COURTESY OF WHS THEATRE The cast and crew of Woodville High School’s One Act Play entry “Wit” is advancing to UIL Regionals and officially placed in the Top 32 in the state of Texas. Adrianna Stark received Top Performer; Madison McGinty got All Star Crew and Tatum Chandler earned an Honorable Mention Cast award. The cast and crew will compete for advancement to the State competition on April 17.

Saturday March 20, Woodville High School Theatre competed at the Bi-District One Act Play Contest. After a convincing performance that won district the week prior, this week’s contest would select the best performances from Bi-District to compete at the Regional Contest in Houston April 16.

Woodville’s selection by Director Melanie Spivey, is scenes from the Pulitzer prize winning play Wit. Wit is the story of Dr. Vivian Bearing, and her death from ovarian cancer. Over the course of the play, Bearing reflects on her life which she has dedicated to the study of metaphysical poet John Donne.

Throughout her career, Bearing has developed a reputation as a harsh intellectualist, preferring knowledge to kindness, throughout the play, as she realizes that she if of interest to her physicians more as research than as a person, Vivian finds a new appreciation for humanity and kindness.

Wit is headlined by Adiranna Stark’s rendition of Dr. Vivian Bearing. Stark, who received Top Performer honors at both District and Bi-District, captivates the audience throughout the performance, never leaving stage she is unequivocally the star of the show and shows tremendous range. In the course of 40 minutes, Stark showcases Bearing as a force of nature in the classroom lambasting students who have no passion for poetry, a graduate student still unsure of her convictions, a child learning to read, and woman dying as she grapples with the reality of death. Stark’s performance as a woman who has studied the humanities only to find that it is in her death, not her life, that she finally understands the depth of what it means to be part of humanity is both breathtaking and awe-inspiring.

Chandler, who was awarded as an All-Star Cast Member, joins Stark in showing a wide range as she and the crew backstage does a masterful job of showing Dr. E.M. Ashford in her prime as Vivian’s professor while in graduate school, and then thru the force of makeup and costuming she ages 30 years to return to the stage as Vivian is dying to provide comfort and love that Vivian has so desperately needed.

Other standout performances included Savannah Ludewig as young medical resident Jason Posner, who along with Bearing, learns that there is more to people than just research. Ludewig showcases a depth of understanding of her role as she embraces the intellectual complexity of remaining professional well having compassion for her patients. Susie Monahan RN, played by A’Nijah Betts plays opposite Posner, as a nurse who is long on compassion, and truly tries to provide comfort and dignity to Vivian as she fights, and ultimately loses, her battle with cancer.

While the crew may be behind the scenes, it should not be lost on those who come to see this show, that the lights and set for Wit were by far the most complex showcased on Saturday. This show, directed by Melanie Spivey and assisted by Donna Blackerby, was truly a delight that challenges our assumptions about what it means to die, and live with dignity.

Woodville One Act Play will next perform in Houston at the Regional Contest on April 16. By Advancing to this level, they are already ranked in the Top 32 3A plays in the state, in April, they will compete for a place on the stage in Austin for the State Competition and a top eight finish.

At this time a public performance is being planned for the near future and trust me when I say you don’t want to miss an opportunity to witness fantastic theatre right here at home.