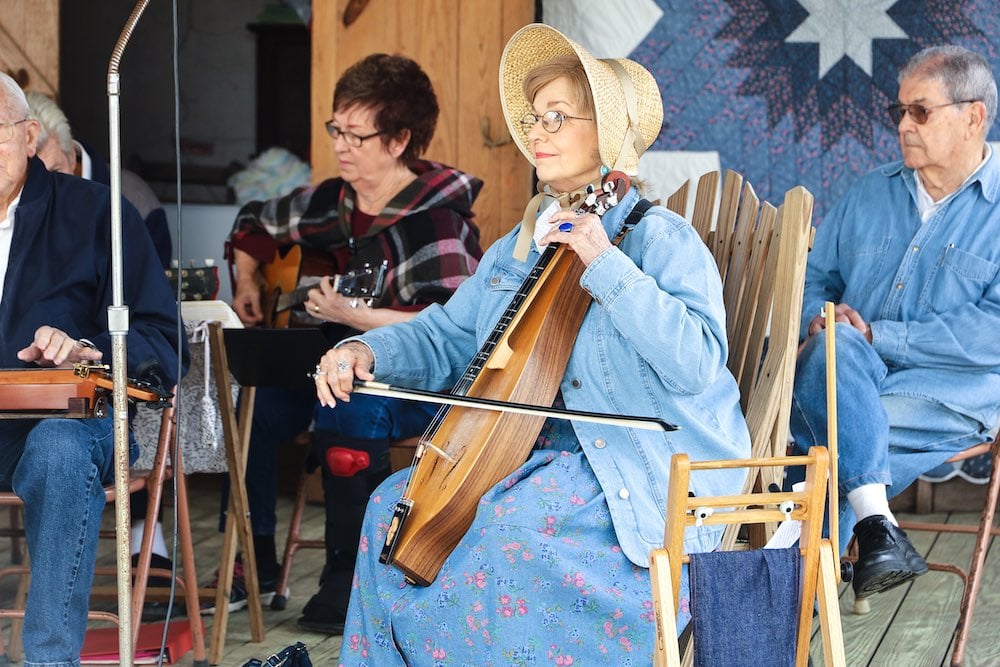 JIM POWERS | PCPC FILE PHOTO Musicians as well as artisans will have their talents on display at the festival of the arts at Heritage Village on Saturday March, 20.

WOODVILLE – A surefire sign that things are eking back into the way they should be in Tyler County is that the Dogwood Festival is upon us, as in starting this weekend.

The festival will kick off with the Festival of the Arts on Saturday at Heritage Village, and it offers a prime opportunity for residents and visitors, alike, to celebrate the heritage and culture of the county, which will turn 175 years young on April 2, the day before the events of Queen’s Weekend, the final weekend of Dogwood.

The Festival of the Arts was one of the first victims of the slew of COVID-19 cancellations last year, as the entire Dogwood Festival had to be rescheduled and relegated to a single Saturday in June. This year, however, it is business as usual, with the pandemic on a downhill slide and the growing availability of the vaccines.

Tyler County Heritage Society President Sarah Reinemeyer said the Village, along with its staff, volunteers and the TCHS Board of Directors wishes to welcome the public back after last year’s absence. The festival is “a fine time to learn, have fun, and make memories,” Reinemeyer said. “We eagerly await your return and hail your good health.”

The gates will open at the Village at 9 a.m., and the festivities last until 3 p.m. Admission is $5, and visitors can tour the Village, take in some live music from the Village Stage and enjoy a special Dogwood Festival exhibit, which is on display in the special exhibits room next to the gift shop.

Along with all of the aforementioned features, there will be a quilt show. Reinemeyer said the Sassy Scrappers group have decorated the entire Village with lots of beautiful homemade quilts. “Each is an art work on its own,” she said. “Many with the family memory to make it more precious.”

Although the traditional dinner-on-the-grounds that has long been a part of the Festival of the Arts has been cancelled this year, visitors will still be able to get some of the legendary food that the Pickett House puts out, including the restaurant’s famous fried chicken and chicken and dumplings.

On Sunday, the Village Street Bed and Breakfast, located at 201 North Village Street in Woodville, will host its Royal Tea, to which all of the little princesses are cordially invited.

The event lasts from 2 p.m. to 4 p.m. and offers the opportunity for young girls to meet the Royal Court and take photos with the princesses and the ladies-in-waiting and to make their own sash.

Each of the girls who attends will also receive a crown of their own. Tickets are available at the door for $20.

In addition to the inaugural weekend for the Dogwood Festival, the customary honor of Mr. East Texas has been named. This year, Ben G. Raimer, MD, was awarded that title, as the festival’s executive director Buck Hudson announced on Monday.

Raimer, a Warren High School grad (class of 1965) currently serves as the president ad interim of the University of Texas Medical Branch in Galveston. He has held many appointments, honors and has earned many advanced degrees.

Raimer is a member of the Texas Pediatric Society Executive Board and President-Elect of TPS. He serves as chair of the Texas Health Institute Board of Directors and the East Texas Baptist University Board of Trustees. He is also a member of the Executive Committee of the Baptist General Convention of Texas and serves as a commissioner on the BGCT Christian Life Commission.

Raimer served as chair of the Health and Human Services Commission Council for a term, appointed by then-Governor Rick Perry.