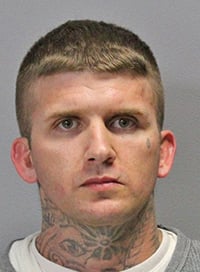 WOODVILLE –An investigation of stolen chainsaws led to the arrest of a Chester man last week.

Officers with the Woodville Police Department arrested 33-year-old David Brenton Jordan on a Class B theft charge at Walmart, according to the Tyler County Sheriff Bryan Weatherford. During an interview with TCSO deputies, Jordan confessed to the theft of multiple stolen chainsaws, which TCSO was investigating.

Weatherford said the robbery occurred on the afternoon of Dec. 6, when deputies were dispatched to Jerry’s Saw Shop on the south end of Woodville.

“Deputies were able to gather witness statements, as well as information on the missing chainsaws,” Weatherford said.

During the investigation, the deputies were able to locate one of the missing chainsaws at a pawn shop in Lufkin. The pawn ticket was dated the same day as the theft had occurred.

Jordan was booked into the Tyler County Jail on Sunday, Dec. 11 and charged with felony theft of property, which was enhanced due to previous convictions. In addition to the felony theft of property charge and the Class B charge, Jordan was also charged with an active parole warrant for possession of a prohibited weapon. Pct. 1 Justice of the Peace Trisher Ford set Jordan’s bond at $15,000. Records indicate Jordan bonded out of jail the next day.