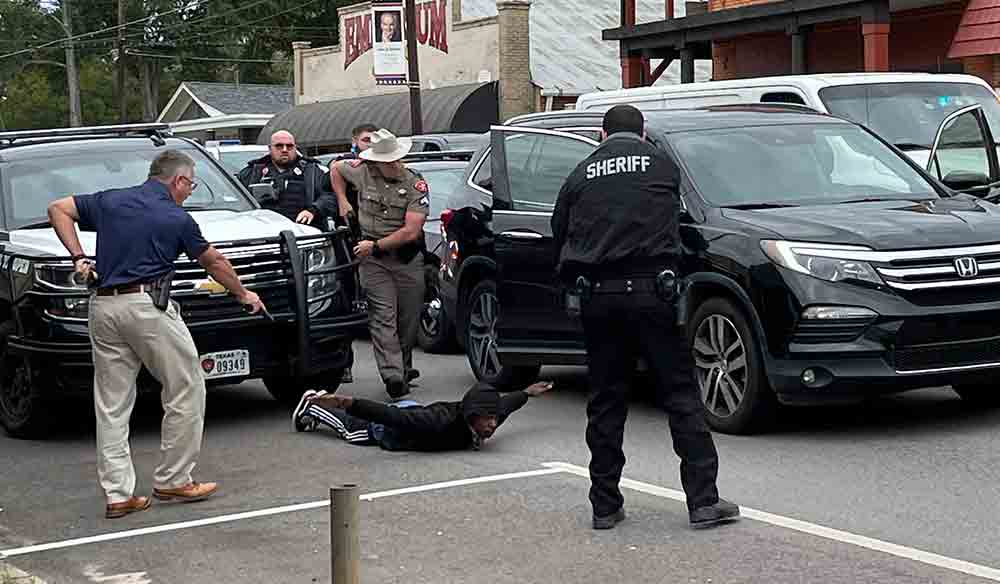 WOODVILLE – The report of a stolen vehicle in Polk County ended in Woodville, right in front of Sullivan’s Hardware, on US 190, and resulted in multiple charges for three individuals.

Multiple law enforcement agencies assisted in the stop, which began with an alert on Monday morning, at 8:50 a.m., received by the Livingston Police Department. According to Lt. Marty Drake, the department received an alert on the department’s FLOCK camera system of a stolen vehicle traveling north, through Livingston.

The vehicle, a black 2017 Honda Pilot, which had a Louisiana license plate, was observed by officers, as it approached an intersection downtown. Drake said the officers who saw it saw another vehicle, a 2022 Buick Park Avenue, following closely behind, also with Louisiana plates.

Although the officers attempted to stop the first vehicle, it did not stop, and a pursuit ensued, while the second vehicle attempted to distract the officers by intentionally crossing over the westbound lanes and wrecked.

Drake said two suspects in that vehicle fled on foot, and after a search of the area, officers located and took Travious Sampson, 19, of Alexandria, LA, into custody, without incident, Drake said.

The pursuit of the first vehicle continued east along 190 and entered Tyler County. Drake said there were two unsuccessful attempts to spike the tires on the vehicle.

When the vehicle became trapped in traffic, both suspects occupying the vehicle stepped out and were taken into custody, without any incidents.

The driver, 18-year-old Lesmon Brown, and his passenger, Martavious Marshall, 19, both also of Alexandria, were taken into custody and transported back to Polk County, where they were booked into the Polk County Jail.

Drake said that as the investigation continued, LPD was later notified by the Houston Police Department, stating that the second vehicle involved, had just been reported as stolen by that agency, after a Crowley, LA resident, Terrick Batiste, made a report.

Drake said the investigation is continuing with more leads and further charges expected to be filed.