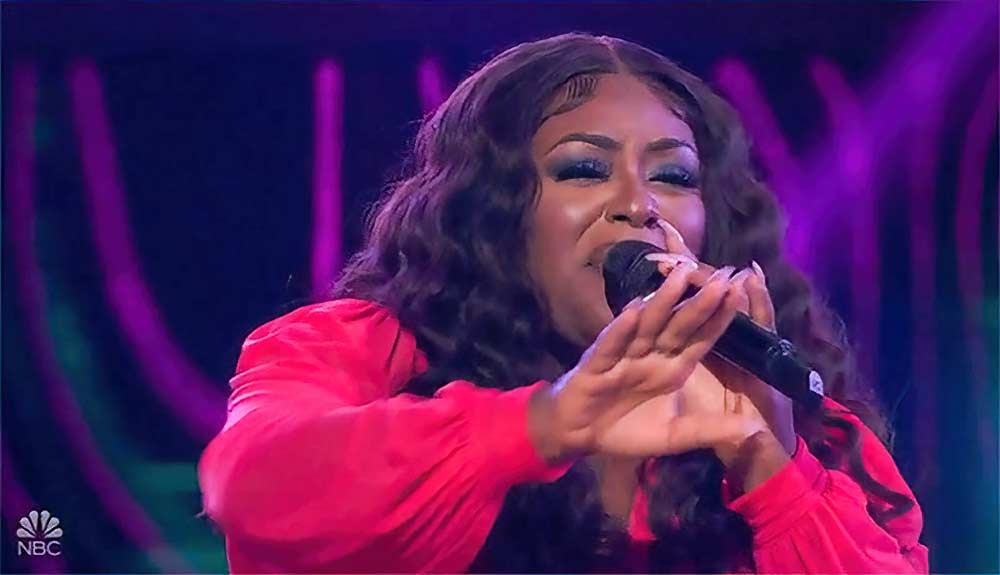 Kim belts out a tune during the blind audition on The Voice. Image courtesy of NBC | The Voice

The term “overnight sensation” is fraught with the fault of a fickle public’s perception. For every artist, band or performer who seems to emerge from nowhere to top the charts or reach the heights of viral YouTube stardom, there’s been years, decades even, woodshedding their artform.

Woodville native Kim Cruse managed to capture the nation’s attention with her soul-stirring performance on Monday night’s episode of The Voice, but she has been a professional musician now for several years and has not been shy about demonstrating her powerful voice, since her childhood.

Cruse, who played hostess to a full house of family and friends on Monday night at the Emporium in Woodville at a watch party, said the show could prove to be a pivotal moment in her life.

In her first appearance on the popular show, Cruse sang “The Best Part”, originally recorded by Daniel Caesar and H.E.R., and got the attention of all four celebrity judges, all of whom turned their chairs around and vied for her to choose them as her coach for the season. Cruse ultimately chose R&B/pop singer-songwriter John Legend as her coach.

Legend remarked about her voice that her “tone immediately got me,” and said “I can’t wait to work with her.”

No Doubt frontwoman Gwen Stefani, who is one of the four judges, called Cruse’s voice “so unbelievably pretty,” and added that she did not even think she could talk after hearing her sing.

The charismatic 30-year-old artist has already achieved viral video stardom prior to her star turn on television, and has toured the country, both as a solo act, as well as part of other artists’ shows. She has also proven herself as a songwriter and recording artist, with the 2021 release of an eponymously titled five-song EP.

Before all of that, Cruse grew up in her father’s church, Little Baptist Church, in Woodville, where she sang as often as she could from an early age. She credits her parents, the beloved Rev. Bobby Cruse and Ramona Cruse, as her biggest inspirations to sing and perform.

“They’ve worked so hard to help make everything happen for me. I want to be able to give them the world and more,” she said.

In an on-camera interview, on the show, Rev. Cruse recalled a time when his daughter was three years old and sang before his flock. The interview Rev. Cruse gave was accompanied by footage of a very young Kim singing with the church band.

“My first public performance has to have been at church. We would have musicals at our church quite often. I believe I sang a song called ‘Mississippi Poor Boy’ with a quartet that my dad invited out,” said Kim.

She also recalled, fondly, how she would stand in her front yard as a small child and sing whatever her favorite song happened to be at the time. “Waking my lovely neighbors up on Saturday mornings” is a fond memory she recalled from growing up in Woodville.

From her childhood filled with singing and music to numerous classical choir competitions in high school, Cruse worked steadily at her craft. She took up songwriting during her high school years, and auditioned for several television shows, such as American Idol and Sunday’s Best, as well as a prior audition for The Voice.

In an interview with the Booster around the time of her record release in 2021, Cruse said she went to Los Angeles to try out for the show but was not chosen at that time. That incentivized her to go ahead and try her hand at putting out some of her own music.

Through her career, Cruse has already earned comparisons to classic women of song, such as Nina Simone and Etta James, and since her appearance on The Voice, some critics have stated that her vocals give the same type of emotional conveyance as the great Billie Holiday.

At Monday night’s watch party, the crowd gave a room-filling cheer each time Kim was on camera, as the episode was projected onto the Emporium stage wall.

Another classic songstress, Madonna, once said that her ambition was “to rule the world,” early in her career. In spite of her already present star power, Woodville’s own Kim Cruse comes across as the same humble, friendly soul she’s always been. Her ambition might not include world domination, but she will certainly let the world around her know of her immense talent.