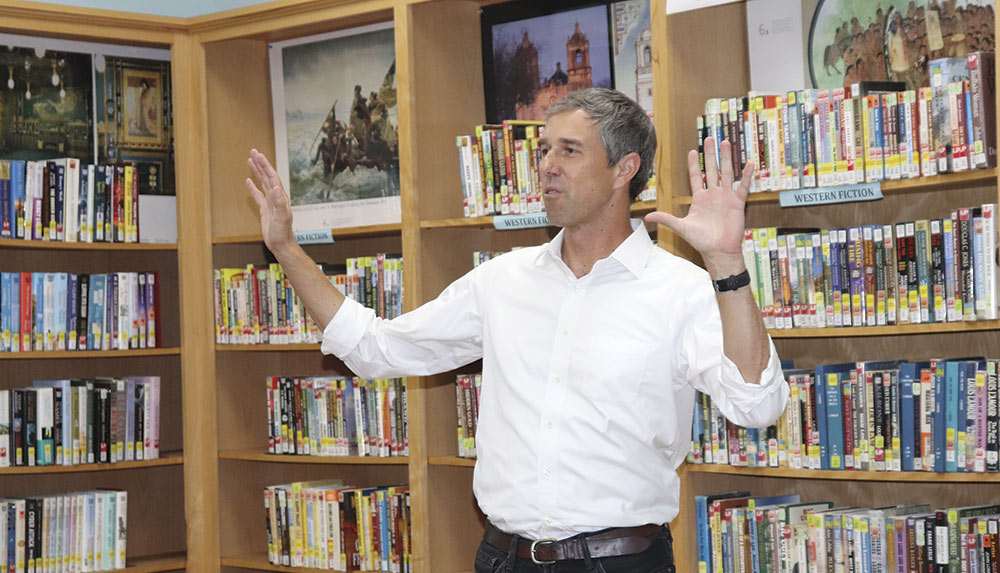 Gubernatorial candidate Beto O’Rourke speaks before a crowd inside the John and Rosemary Bunch Reading Room at Allan Shivers Library in Woodville. Photo by Mollie LaSalle

WOODVILLE – Democratic gubernatorial candidate Robert Francis “Beto” O’Rourke’s campaign made an appearance at the Allan Shivers Library in Woodville, Saturday, July 30 as part of a 49-day, more than 5,600-mile statewide Drive for Texas.

O’Rourke hopes to overcome current incumbent Greg Abbott in November’s general election, and Abbott’s policies, which he said include a total ban on abortion with no exception for rape or incest; defunding public schools; driving up inflation and blocking measures to keep children safe in public schools.

O’Rourke is the first gubernatorial candidate to make a stop in Woodville since Ann Richards’ visit in 1990. At present, O’Rourke is outraising Abbott in fundraising measures, and polls indicate he is narrowing a gap in projections for November’s election, with Abbott still leading by six percentage points among likely voters.

The large turnout prompted the organizers to split up the event into two town halls, the overflow crowd waited outside on the lawn while the capacity crowd in the reading room waited for O’Rourke to speak. “More people came than we had chairs inside”, O’Rourke told the crowd on the lawn.

Acting Democratic party chair Wilbert (“Wilbert T.”) Barnett introduced O’Rourke to the supporters inside, and after a speech from Janet Dudding, who is running for Texas Comptroller of Public Accounts, O’Rourke took center stage.

O’Rourke spoke on his key points he will accomplish as governor, mainly to ensure that children receive a world class public education in order to achieve their full potential,” we need more teachers who look like our children in the classroom; our young people are going to have to live with whatever we do or fail to do, more than any one of us” O’Rourke said. “We need reliable high-speed internet, regardless of where you live, you get the same resources”, he added. “Texans should be able to see a doctor when they need to.” “There is a lot we have to correct and overcome; public education and world class schools will be a priority when I am elected governor”.

O’Rourke spoke about the division that is currently in place in Texas and also in the country. “We need to treat each other with the kindness, compassion, dignity and respect that each of us is owed. In Greg Abbott’s Texas it is you or me; he is going to tell you who to hate and who to be afraid of; In Beto’s Texas it will be you and me, we all come together to do the big things together” he said.

“In our Texas everyone is going to be treated equally under the law; we’ve got to listen to one another, we won’t find it if we only listen to people we agree with”.

“My best opportunity to serve Woodville and Tyler County is to first listen and learn from the people I want to serve. Before we are Republicans, before we are Democrats, before we are anything that defines us based on our differences, we are Americans, we are Texans, and we are human beings,” he said.

O’Rourke also addressed issues with statewide agencies and infrastructure concerns. “The chaos, cruelty, corruption and incompetence of the people in power today who cannot keep the power on for the people they are supposed to serve when the temperature drops cannot oversee the CPS system and get it back on the right foot,” he said. “We have a governor who has outlawed abortion with no exception for rape or incest in a state with one of the highest maternal mortality rates in the world, three times as deadly for Black women as it is for White women in the state of Texas.”

He touched on the tragedy in Uvalde, commenting “Nine weeks after Uvalde, we have not changed a thing to make it easier for those kids to go into a classroom without fearing that they are going to be killed by someone with an AR15 or AK47.”

O’Rourke was asked about the border wall, and he said “the idea of building a wall from Brownsville to San Diego is not feasible. A wall is not going to stop the tragedy that happened in San Antonio a few weeks ago when a tractor trailer carrying 53 immigrants passed through every checkpoint at the border, ultimately being stopped in San Antonio. Walls may sound good, but they are not getting the job done.” He fielded a question about marriage equality from the crowd inside. “I am going to fight for the rights of all my fellow Texans and stand up for marriage equality and LGBTQ rights. O’Rourke added that “In Texas, an employer can refuse to hire you simply based on your sexual orientation. You can be denied adoption or fired because you are gay. Under Greg Abbott’s watch, if you are the parent of a transgender child, you will be accused of child abuse and they will try to take custody of your child and turn them over to CPS, which is badly managed and the worst foster care program in the country.” “When I am elected, I will use the power of my office to fight for women’s rights and for them to flourish right here in the state of Texas. Women must make their own decisions about their body and their future.”

O’Rourke spoke for about 35 minutes to the crowd inside before making his way outside to speak to the people who had been waiting.

A small group of protesters also gathered, but kept their distance, and for the most part, were respectful and quiet.

There were a few members of the county GOP organizations of both Tyler and Hardin counties, with bullhorns, shouting at O’Rourke’s supporters. Some heckled O’Rourke when he showed up for the event, but did not disrupt the gathering. O’Rourke invited them to come and speak on the microphone once he addressed the outside crowd.

A representative from the Tyler County Republican Women’s group said “you want to take guns away from everyone. The gun itself is not the problem. Everyone has a right to protect themselves.” O’Rourke said “I want you to be able to protect yourself in your own home. We are not bad people. We don’t have laws that match our values. At the end of the day, we are going to have to find some common ground.”

O’Rourke and his entourage also had a town hall stop scheduled for Beaumont that evening, with a stop in Port Arthur Sunday, and they began Saturday with a town hall in Hemphill.

After speaking to the outside crowd and answering everyone’s questions, it was time for a meet and greet, as people lined up to have pictures taken with O’Rourke. Some just wanted to shake his hand and let him know he had their support.

He was told by one supporter “you got this, Beto,” to which he replied, “no we got this.”