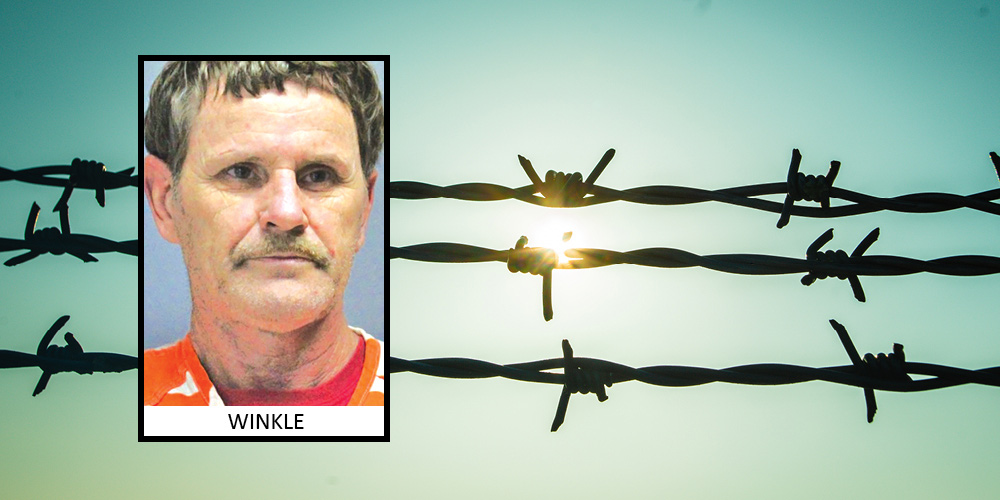 SPURGER – Thanks in part to a barb-wire fence, a Spurger man is in the custody of the Tyler County Jail on several felony charges following an arrest last week.

According to Tyler County Sheriff Bryan Weatherford, deputies with the Tyler County Sheriff’s Office were on patrol in the Spurger area, along CR 455, last Thursday night. They were attempting to serve a felony arrest warrant on Phillip Lawayne Winkle, 52.

Weatherford said that when the deputies approached the residence they were to serve the warrant at, they observed several individuals in the backyard with flashlights.

“Deputies then observed a male individual take off running towards a woods line behind the residence,” Weatherford said. He added that when deputies pursued the subject, whom they identified as Winkle, they heard him yell out in pain as he fell to the ground.

When they were able to make contact with Winkle, he was entangled in a barb-wire fence, and they were able to cut him free from the fence. Winkle had, according to Weatherford, no injuries that needed any medical attention.

Weatherford said that when Winkle was transported to the county jail, he was charged with warrants locally for felony possession of a controlled substance (Penalty Group 1/1-B, amount greater than one gram) and a felony charge for failure to comply with sex offender regulations.

Winkle, according to the Texas Department of Public Safety Sex Offender Registry, has an annual registration requirement. He was convicted of a child rape charge in 1996.

Additionally, Weatherford said, Winkle also has a charge out of Louisiana for felony-level criminal conspiracy.