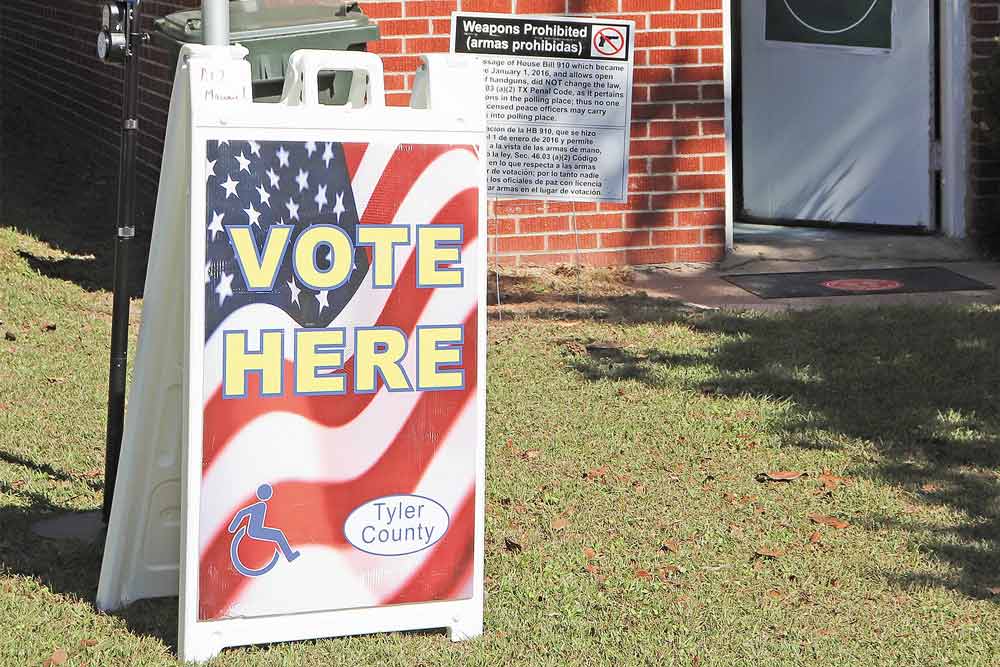 Voters in Tyler County turned out to polling places on Election Day in smaller numbers than those who chose to vote early. (CHRIS EDWARDS | EASTTEXASNEWS.COM PHOTO)
BY CHRIS EDWARDS
This email address is being protected from spambots. You need JavaScript enabled to view it.

TYLER COUNTY – With Election Day on Tuesday, the end came to a contentious presidential campaign, and records were shattered, both locally and nationwide.

At this time, former Vice President Joe Biden (D) led incumbent President Donald Trump in electoral votes, with Biden’s 223 over Trump’s 174, but neither candidate had received the necessary 270 to win.

Trump was favored to win Texas with 52% to 46.8% of the vote based on returns. He won Tyler County with 5,581 votes tallied from early voting totals. The other boxes were not available at press time for the presidential race, but that early figure was a sizable lead in the county over Biden’s 1,094.

In the 2016 race, Trump won Tyler County 6,601 votes. The total number in this, and other contested national races will be available on our Facebook page as soon as they are available.

In countywide races, the contest between incumbent sheriff Bryan Weatherford, who ran as a Republican, and his challenger Michael “Mike” King, who ran as an independent candidate, ended with Weatherford maintaining his office. Weatherford received 6,379 votes to King’s 2,961.

In Tyler County, the early voting turnout broke records, with 5,889 early votes counted as of last Friday, according to county clerk Donece Gregory. That total comprised 40.4% of the county’s 14,557 registered voters.

That turnout mirrored the nationwide trend, with close to 100 million voters opting to cast their ballots prior to Tuesday.

The closely watched Senate race between incumbent John Cornyn, a Republican, and Democratic opponent MJ Hegar ended with Cornyn’s re-election. Early voting totals for that race in Tyler County had Cornyn at 5,390 votes and Hegar at 1,077.

The final determination for the presidential race comes on Dec. 14 when Electoral College electors are due to cast their ballots.

Other contested races in the county, which had unofficial totals at press time included mayoral and city council races for Woodville and Ivanhoe, as well as school board races in Colmesneil, Spurger and Woodville.

In the Woodville ISD Board of Trustees, place 2, John David Risinger received 1,732 votes over Kris Fowler’s 1,450.

For the Spurger school board position, Brad Hatton had 351 votes and Juli Golden 186.