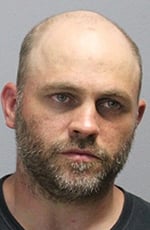 According to Tyler County Sheriff Bryan Weatherford, a call came in on Thursday, April 21, when deputies were dispatched to an Ivanhoe residence in reference to a family disturbance involving weapons. When deputies arrived at the house on Sir Henry Drive, they were able to make contact with, and talk with, witnesses and a victim.

They were told that a suspect, identified as 37-year-old Richard Jacob “Jake” Snider, of Ivanhoe, had already left the residence. Allegedly, Snider had fired several gunshots outside the house and entered, and threatened the victim.

The deputies managed to college several items of evidence, Weatherford said, as well as witness statements, but could not locate Snider.

The next morning, at 1:15 a.m., deputies were made aware that Snider had returned to the residence. When they arrived, they detained him, and he admitted that he had, in fact, entered the residence and threatened the victim while holding a 9 mm. handgun.

The deputies also learned that an active warrant was out for Snider’s arrest from the city of Jasper on a Class A theft charge.

Snider was booked into the Tyler County Justice Center, and charged with aggravated assault with a deadly weapon, as well as the active warrant from Jasper. His bonds, set by Pct. 2 Justice of the Peace Ken Jobe, totalled $63,000.

Snider is currently out on bonds.