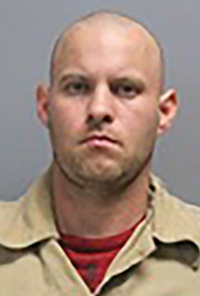 CECIL ZIMMERMANSPURGER – Tyler County Sheriff’s Office recently concluded an investigation and made an arrest of a Warren man.

According to Tyler County Sheriff Bryan Weatherford, deputies began an investigation late last year in reference to a dollar bill that was received at the Spurger Exxon and covered in an unknown white powder.

Weatherford said that TCSO recently received a lab report from the Texas Department of Public Safety crime lab that confirmed the white powder to be methamphetamine.

Additionally, deputies were able to work with the store’s employees to gather evidence, including video surveillance footage.

“With video footage and knowledge of the individual, deputies and clerks were able to identify the individual in possession of the meth as Cecil Zimmerman,” Weatherford said.

Zimmerman, a 29-year-old Warren resident, was located and arrested in Spurger at a residence, and transported to jail on a felony possession of a controlled substance charge, as well as a parole violation warrant issued by the Texas Department of Criminal Justice Parole Division.

Zimmerman is a registered sex offender, and according to the Texas DPS Sex Offender Registry, has a lifetime registration requirement, stemming from two rape charges from 2010, one of a 15-year-old girl and another of a 14-year-old. He was on 10 years’ parole and probation for each charge.