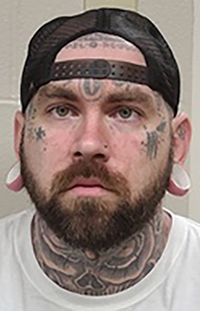 Tidwell, a 33 year-old man, was arrested on Tuesday without incident, according to Tyler County Sheriff Bryan Weatherford.

Tidwell was the subject of a month-long manhunt, after being wanted on charges of burglary of a habitation and engaging in organized criminal activity. TCSO asked the public’s help in locating Tidwell and Crime Stoppers had offered a reward for any information as to his whereabouts.

Tidwell, who was believed to reside either in the Dam B area or in Jasper County, was arrested at a residence in the Brookeland area. Weatherford said that TCSO deputies had received information that he was possibly staying at a residence there. Deputies with the Jasper County Sheriff’s Office located and arrested him and transported him to the Tyler County Justice Center.

Weatherford said that during a search of Tidwell’s property during booking, deputies discovered a clear plastic baggie containing a crystal-like substance, which tested positive for methamphetamine.

Tidwell is in custody and his bonds were set by Pct. 1 Justice of the Peace Trisher Ford, totalling $200K.

His charges include engaging in organized criminal activity; burglary of a habitation and possession of a prohibited substance in a correctional facility.

Tidwell is also a convicted rapist. He is listed as a lifetime-required registrant on the Texas Department of Public Safety Sex Offender Registry stemming from a 2011 conviction.