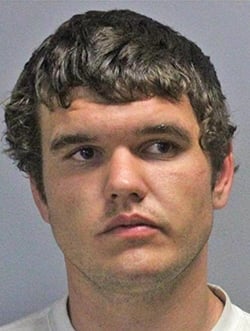 EssaryBy Chris Edwards
This email address is being protected from spambots. You need JavaScript enabled to view it.

SPURGER – A Spurger man faces a litany of charges after he was arrested for crashing a stolen pickup truck into a school bus.

Last Thursday morning, deputies with the Tyler County Sheriff’s Office were on patrol in the Dam B area and attempted to stop a white Chevrolet truck for a traffic violation, southbound along FM 92, according to Tyler County Sheriff Bryan Weatherford.

Weatherford said that the TCSO vehicle had its emergency lights and sirens activated, but the driver refused to stop, and at a high rate of speed, ran a stop sign on CR 4375 (also known as Moss Bridge Road) and FM 2992, colliding with a Spurger ISD school bus.

Weatherford said that six students were on the bus and none of them, nor the driver, were injured. The driver of the vehicle, whom deputies identified as Kyle Allen Essary, age 23, of Spurger, fled to a nearby wooded area on foot. Deputies learned that the truck Essary was driving had been reported as stolen from the Colmesneil area.

Essary was caught at 9 a.m., about two and a half hours after the chase began. He was apprehended a half mile away from the scene of the crash. Weatherford said he had emerged from the woods and knocked on a homeowner’s door asking for a ride.

The homeowner called TCSO, and deputies subsequently found him on foot, along FM 2992. Essary was arrested and transported to the Tyler County Justice Center, and charged with felony evading arrest with a motor vehicle; unauthorized use of a motor vehicle and issued six felony counts of endangering a child; one charge for each student who was riding the bus.

Weatherford added that many other law enforcement and emergency personnel assisted on the scene, including the Woodville Police Department; DPS troopers; Spurger Volunteer Fire Department; Allegiance Ambulance and the Spurger ISD staff, all of whom assisted in treating and caring for students who were on the bus.

At the time of Thursday’s series of events, Essary was out on bond for an earlier March arrest. He was arrested then in Fred for an active blue warrant for Burglary of a Habitation.