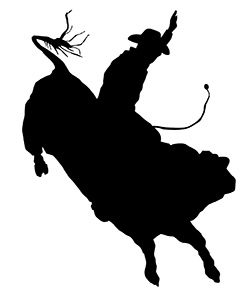 WOODVILLE – With the Festival of the Arts in the books to kick off the Dogwood Festival’s three weekends of   celebrations, the second weekend, Western Weekend, is now upon us.

Tyler Countians and visitors, alike, will be able to enjoy two evenings of rodeo, sponsored by the Woodville Lions Club, along with plenty of other events.

Friday and Saturday will both play host to the rodeo out at the 4-H/FFA arena, located west of Woodville on highway 190.

The rodeo, which is being produced by Branded for Christ Rodeo Productions, is a CPRA-sanctioned event, and will take place at 7 p.m. on Friday and 4:30 p.m. on Saturday.

Widner, who came off a lengthy hiatus, is a Tyler County native, who made waves on the Texas County circuit in the early 2000s.

Saturday morning will include a trailride parade through downtown Woodville, which will end at the arena.

The roots of the Western Weekend date back to 1958, when 75 horseback riders joined the Dogwood Festival parade. That tradition continued for 10 years, and due to the increasing numbers of horseback riders, the trail bosses requested a parade of their own.

A big part of the Western Weekend activities are trailrides, according to the festival’s directors, which are kept up in an effort to preserve the heritage of the East Texas cowboy and to enjoy the natural beauty afforded by the region. More than 2,000 trailriders, on average, travel by horseback and wagon to Woodville during the final weekend in March.

Next week, the Booster is releasing a special, tabloid-sized commemorative section for this year’s Dogwood Festival. It will be inserted in each issue of the newspaper, and also available at the Booster office during the Queen’s Weekend parade for anyone who might want one as a keepsake.