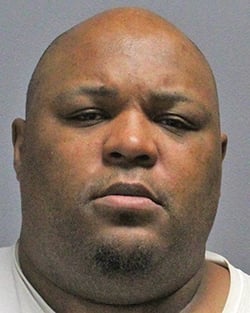 Marcus Dion BrownWOODVILLE – A tip from Child Protective Services led to the arrest of a man who had been convicted of a sex crime in Indiana.

According to Capt. Jathan Borel with the Woodville Police Department, officer Troy Costello received the priority one report, and immediately began looking into it. The report indicated that a man, Marcus Dion Brown, had felony warrants out of state.

Brown was wanted in Indiana for failure to register as a sex offender. Borel said that the 43-year-old Brown was residing locally under an alias, “Lopez.”

When Costello made contact with Brown, he was staying in the Woodville Inn, and continued to deny his true identity. Borel said that he also was in possession of a firearm when he was placed under arrest last Wednesday.

Borel added that Brown has a documented history of intimidation. “Therefore, we are concerned that there may be additional victims. There may be people who have been coerced to doing things under duress,” Borel said.

Brown was booked into the Tyler County Justice Center, where he remains in custody; booked in for the out-of-state warrants, as well as possession of a firearm by a felon. He was issued a no bond by Woodville Municpal Judge Judith Haney, and Borel said more charges are anticipated.

Borel said that the police work of his colleague was key to getting Brown off the streets. “Officer Costello did a really good job on this,” he said. “He took a small bit of information that he had, which could have easily been nothing, because a lot of the time the info CPS gets is just concern or suspicion.”

“Every once in a while it takes someone to pick up the ball and run with it,” Borel said of Costello. “Officer Costello did a great job.”

Borel said that Woodville PD wants to do its part to locate anyone else who may have information about Brown, as well as anyone who may have been victimized by him. Anyone wishing to come forward may contact Woodville PD at 409-283-3791, or can visit the police station, located at 113 N. Charlton Street in Woodville. Borel noted that anyone with information will remain anonymous.