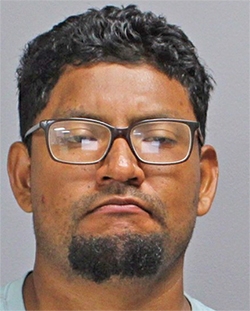 RodasBy Chris Edwards
This email address is being protected from spambots. You need JavaScript enabled to view it.

IVANHOE – Tyler County law enforcement is investigating an alleged assault that took place in Ivanhoe, and resulted in a suspect apprehended on a pair out-of-county warrants.

Last Wednesday morning, at approximately 11:15 a.m., according to Tyler County Sheriff Bryan Weatherford, TCSO deputies were dispatched to a residence on Lancelot Street in reference to an assault in progress.

“While en route to Lancelot Street, the deputies learned the male individual involved in the assault left walking from the residence,” Weathferford said.

The deputies located the suspect, who was identified as Ozzie Angel Rodas, a 33-year-old Ivanhoe man. Rodas was found near the entrance to Ivanhoe.

The deputies learned that Rodas had two active warrants for his arrest out of Dallas and Denton counties, one for Assault – Family Violence and another for Possession of a Controlled Substance.

Roadas was transported to the Tyler County Justice Center and transferred the next day to the Dallas County Jail, where he is currently in custody.

He is still, according to Weatherford, being investigated for the assault incident in Ivanhoe.