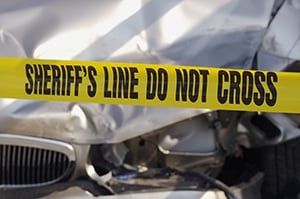 COLMESNEIL – A Kountze man is dead following a crash in Colmesneil last Tuesday.

According to Texas Department of Public Safety Sgt. Shana Clark, Glenn Matthews, 36, of Kountze, died following the accident, which involved a motorcycle and a car.

According to Clark, Matthews was headed south on U.S. Highway 69 when he attempted to pass a car, which was turning east onto 69, and entered the intersection adjacent to the building that once housed Davis’s Grocery.

Matthews was driving a 2015 Kawasaki motorcycle when he struck the car, a Toyota passenger vehicle.

Clark said Matthews, according to the crash investigation, lost control of his motorcycle and struck the car.

The wreck occurred early in the evening, and Colmesneil Volunteer Fire Department arrived on the scene to direct traffic.

Paramedics rushed the critically injured Matthews to Tyler County Hospital, and he was then airlifted by medical helicopter to Hermann Memorial Hospital in Houston, where he died later that night.

The name of the driver of the car has not been released.