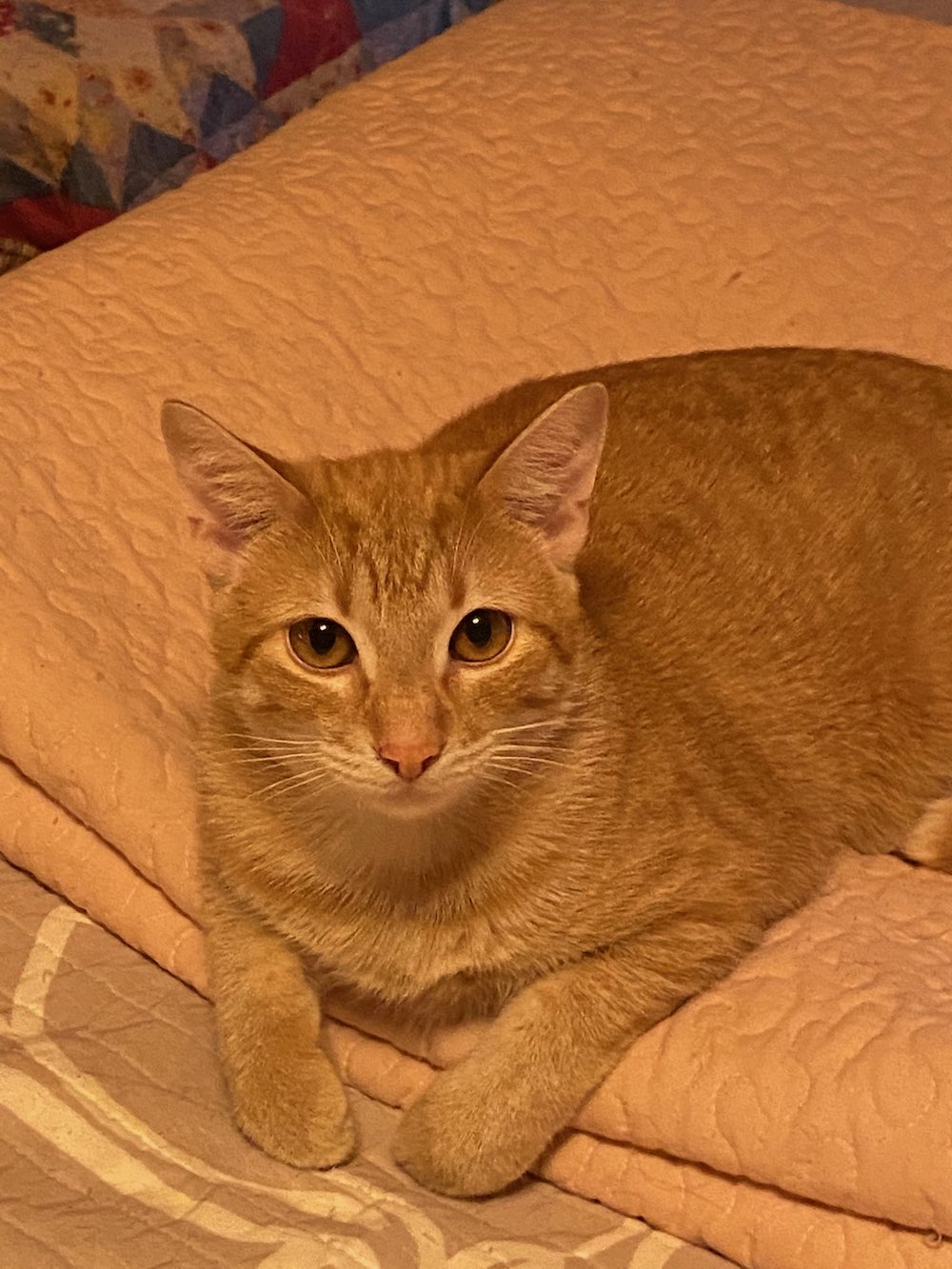 This is Tiny Kitten, and he’s a joy to be around.

For those of you who are loyal readers of the scrawlings I spin here on this site (all three of you) there may be a few things you may have learned or will learn about me in our time together.

For instance, you might become aware of the facts that I like dour old Southern writers, the great old bluesmen, really great Texas barbecue (cooked the tried-n-true old-fashioned way) and a lot of other really old, but really cool, stuff.

You also might be aware that I really enjoy the fellowship and comfort of our animal friends, especially cats and particularly orange cats.

A lot of people go on and on about their “soulmates.” Some youngsters have a succession of “soulmates.” Not sure how that works, but I somewhat believe in the concept as a whole, however I don’t think it has to be limited to a fellow human. My soulmate was a shockingly bright (both in fur color and in regard to intelligence) orange cat named Orangey Tangerine Garfina, and the one-year anniversary of her passing is rapidly approaching.

I’ve known a great many folks in my existence, but nobody “got” me like Orangey did. I’m not sure if she was my sidekick or if I was hers.

Last summer before she passed on to the great treat-gobbling parlor in the sky, I’m convinced that she, along with the Lord above, sent an unexpected blessing into my life in the form of a tiny orange kitten.

The kitten showed up at the house before Orangey peacefully passed, but it would take a little while before I was able to put my hands on it. My mother, who is as big of a friend to wayward felines (if not moreso) as me, diligently worked to catch the scared little fella. Before long, we were able to provide some human comfort to him, and a proper name of Ziggy Sunkist Stardust, in honor of the late, great David Bowie. However, it soon became apparent that his nickname of “Tiny Kitten” would likely be a lifelong term of endearment.

It has been more than a year since I was first able to pet and hold the tiny orange one, and although he’s now “husky,” in the words of his veterinarian, it’s still so much fun to call him Tiny Kitten, so much so that he doesn’t even look whenever I call him Ziggy.

One thing that those who have known orange cats have discovered, without fail, is that those orangies have enormous personalities. Although Tiny/Ziggy’s sweet orange godmother had enough personality for 10 cats, the little one is no slouch in that department. He’s a lot shyer than she was, and not nearly as vocal, but his playful, sweet ways never fail to make me smile on a daily basis.

To say this has been a weird year for all of us would be like saying President William Howard Taft was a wee bit chubby or that Shane MacGowan enjoys a drink now and again.

Uncertainty has wrapped its ugly arms around most of the populace, and although the COVID-19 pandemic, as well as outbreaks of unrest on our soil can be terrifying and upsetting, none of us really knows much about anything, in a universal sense.

The mighty Nacogdoches metallurgists the Beef Masters put it best in one of their songs, “Blurry,” which contains the lyric “Everything you see and everything you feel might be gone in a moment’s notice.” It’s a sobering and saddening thought, but so true.

Be that as it may, that little orange feline has made all of the existential angst easier to bear in my world. Not only has

he been there for me through this year of extreme uncertainty, but he has also seen me through the deaths of a couple of friends. He’s been, to say the least, a joy to be around, and every day, his cheerful demeanor is always a bright spot in my daily existence.

Tiny Kitten is in no way a replacement for my sweet Orangey girl, but the circumstances of his coming into my life has made me realize there is a lot of truth in that ages-old maxim about good/great things happening when one least expects it.

There are other lessons I’ve learned from the (now not-so-tiny, but still fun-to-say) Tiny Kitten, and I’m certainly glad I get to be one of his humans.

In watching little orange man’s day-to-day doings, it’s easy to take away how important grooming and hygiene is, and not just in this age of sanitizing everything due to the virus. Tiny Kitten could spend hours licking himself.

Also, Tiny Kitten believes in rest. That little feline fellow could sleep 80% of the day away, but he’s still a growing kitten. The body needs rest when tired, so be sure and replenish your sleep after those long days.

Last, but not least, it’s alright to indulge here and there in that snack that probably isn’t the best thing for you, if it brings you joy. Tiny Kitten loves eating his treats (after he bats them around with his little orange paws) and seeing how happy that makes him makes me not feel so bad about late night runs to grab a pint of Blue Bell Cookie Two Step, which I typically eat in one sitting. Note: I limit my ice cream habit to a pint at a time. Eating an entire half-gallon of Blue Bell would just be excessive.

If Tiny Kitten could talk, he would probably look at me, with that still kitten-y face and those big eyes, and say “Don’t sweat the small stuff, human. In the long run, it’s all small stuff.”