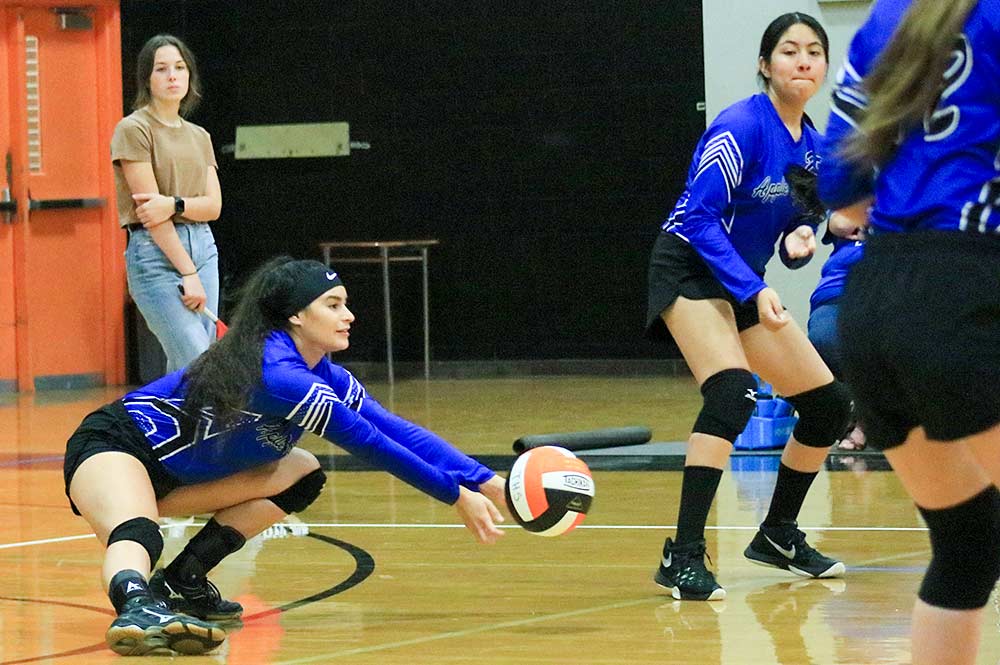 Apple Springs Lady Eagle Neveah Hernandez digs out a serve during an Aug. 31 match against Trinity. (Photos by Tony Farkas/TCNS)

TRINITY — The Trinity Lady Tigers played county rival Apple Springs on Aug. 31, and managed to rack up their first wins of the season.

Trinity Head Coach Haleigh Blount said the team did some amazing things, but has a habit of becoming mentally comfortable with where it is and settling for things that are not up to its potential.

“The great thing is that this team has no seniors, so even though mental habits are hard to break, we can use this year to do just that,” she said. “I'm proud of how far they have come, and I'm excited for their future.” 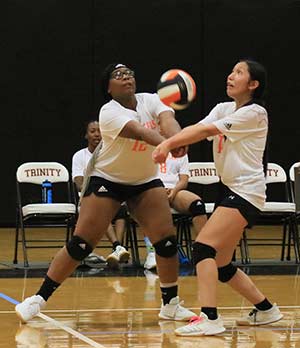 Trinity Lady Tigers Destinee Simmons (No. 12) and Vanessa Acosta both look to return a serve during an Aug. 31 match against Apple Springs.Apple Springs Coach Michael Powell said his team went into the game intimidated by the athleticism of Trinity, which set them back on their heels for the first set.

“After we relaxed and saw that we could play well against the Trinity team, we did much better,” he said.

In the first set, the Lady Tigers took an early 10-1 lead with serves and aggressive play, and the score ended at 25-11.

Blount said that the team was flat in the second game, missing several serves and making unnecessary forced plays that caused several errors.

Powell said his girls were making up for a missing starter, but played very well.

“Nevaeh Hernandez is a great leader on the court and she has stepped up this season to help out some of the younger girls, and that was what helped us Tuesday in Trinity,” he said.

Trinity schools are closed until Sept. 13 because of COVID, so no games are scheduled. The Lady Eagles were to face Oakwood on Tuesday, and will face Hudson on Friday.