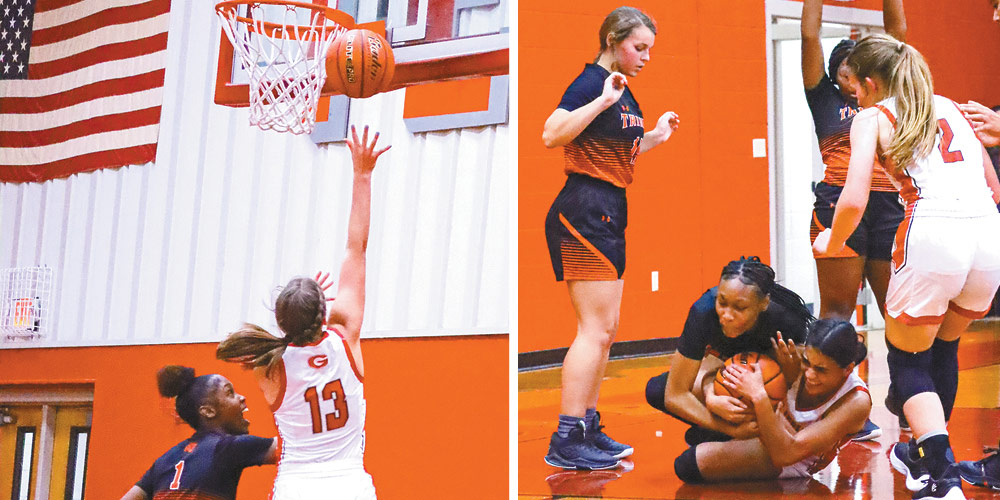 Lady Indian Kiki Smith (No. 13) goes for the layup over Trinity’s Shawwna English. Players from both teams hustle for a rebound. Photos by Martha Mericle

Trinity Head Coach Patrick Carter said he is very proud of the team, being only two games into the season.

For the Lady Tigers, Shawwna English led the team in scoring with 10 points, 8 rebounds and 3 blocks. Taneya Maxie and Natalie Bates each had 6 points.

For Groveton, top producers were Anahi Chavez 13 points, 6 steals, 4 rebounds and 2 assists; Kiki Smith with 11 points, 4 steals and 4 rebounds; Isavel Bautista with 5 points and 3 rebounds; Stormie Hensley with 4 points; and Laney Peterson with 3 points and 2 steals.

Trinity opened the girls’ basketball season on Nov. 8 against Palestine Westwood, losing 38-37. Leading scorers were Maxie with 18 points and English with 15 points.

In the girls opening game, early foul trouble put a damper on Centerville leading to a 41-19 victory for Latexo.

Eight first-quarter fouls put two Centerville starters out of the game early and mixed with hot shooting from Latexo meant Centerville struggled.
Top scorers were Kate Rogers with 15 points and Jada Welch and Brianna Commiato each with 2 points.

In the boys opener, defensive and shooting struggles for the Bulldogs allowed Latexo to jump out to a 24-14 lead at halftime.

More of the same continued in the third quarter as Centerville only managed 5 points. The Dawgs finally showed some life with 16 fourth-quarter points, but it wasn’t enough as Latexo earned a 59-35 victory.

In the JV boys match, Centerville grabbed an impressive 59-34 win over Latexo through hot shooting. Colton Brasuell led scoring with 18 points, followed by Iain Kendrick with 17 points, Blayn Self with 14 points, Ty Powers with 6 points and Wesley Maxfield with 4 points.