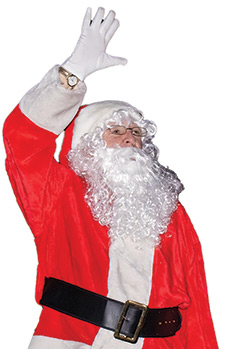 By Mollie La Salle
This email address is being protected from spambots. You need JavaScript enabled to view it.

WOODVILLE – Christmas in Tyler County kicked off with a bang last Friday evening. Tyler County Chamber of Commerce President Cathy Bennett warmly welcomed everyone to the festivities and gave a special shout-out to Chamber Director Holly Wells for making it all come together.

There was a brief appearance by the Grinch, who seemingly came out of the shadows, attempting to steal Christmas presents, but he was swiftly apprehended by Woodville Police Sgt. Marc DeShazo, and brought before Judge Ken Jobe for sentencing.

The Grinch begged for forgiveness and was sentenced to community service and assigned to work with Santa to spread Christmas cheer.

Friday’s festivities continued with the lighting of the courthouse, and finally, Santa Claus (a.k.a Jim Goodman) made his appearance, where he was given a key to the county. The Woodville High School band and Kelsi Risinger provided music, Wee Wisdom provided the live nativity scene, and Christmas carols were sung by Fellowship Primitive Baptist Church. Dancers were on hand from Tawnya’s School of Dance, there was a bounce house for the kids and Dogwood Hills Baptist Church had a fun train ride.

The Chamber also held an Ugly Sweater contest and a Battle of the Beards contest. Also, this year, they had a Christmas punch card contest, with more than 30 businesses participating.

The response was overwhelming, and participation far exceeded their expectations.

Saturday brought round two of the events, beginning with the Rotary Club of Woodville’s annual Pancake Breakfast with Santa at St. Paul’s Episcopal Church; the first ever Jolly Jeep Jingle contest downtown and the Mistletoe Market on the square.

Saturday evening played host to the Twilight Tour at Heritage Village, with plenty of entertainment, including a lively performance from the children of St. Paul’s Episcopal School, and the City of Ivanhoe held its annual lighted Christmas boat parade.

Christmas in Tyler County 2022 was an all-around jam-packed weekend full of fun and laughter.