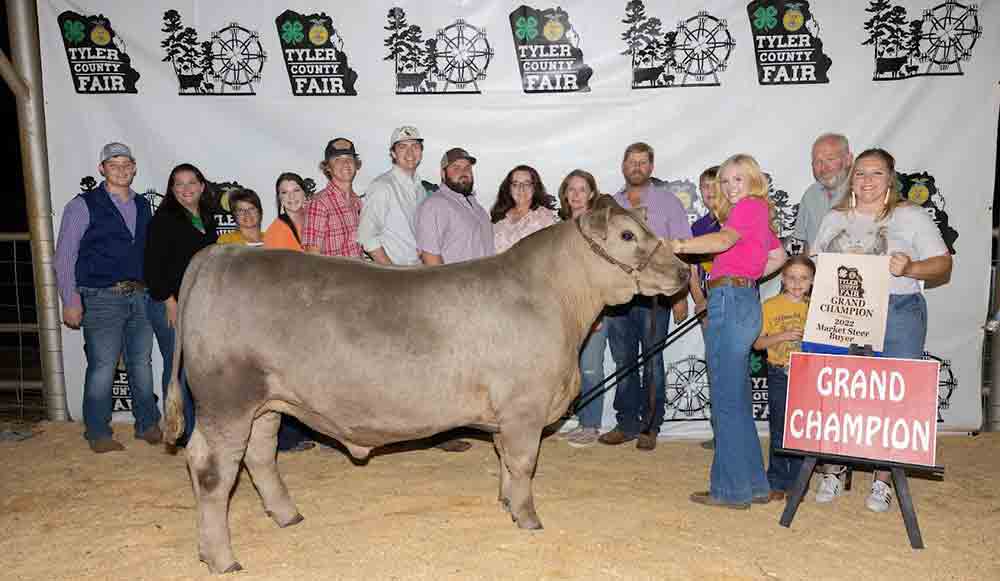 The Tyler County Fair is an annual event that centers around the first full weekend in October. However, even if the show was on last week from Wednesday to Saturday, there were plenty of rehearsals and setups beforehand and after.

The Tyler County Fair Board puts on this program and President Bronson Grimes called this year a resounding success. One key thing that is important for me to remember is how many moving parts it takes to get something like the fair rolling. It’s so much more than a livestock show, there are programs like the Home Economics Divisions that saw big winners in baking, art, sewing, and other divisions. A favorite of mine is the Ag Mechanics Division, a growing program of our fair that sees young people show off their welding and woodworking skills to produce home-made products. And of course, no one has ever complained about how good the fairgrounds smells during the barbecue cook-off, which saw Woodville FFA hoist a trophy on Saturday night.

The moments and memories make the fair so much more special than the money ever could though, and we had plenty of memories. Wins and losses can teach us so much, and we saw some of both over that four-day period in October where lives are changed. Since transitioning from County Agent to Ag Teacher, I experienced something that was a totally different kind of memory. While I occasionally had a senior or two in the 4H program, it was usually just a few, as most high school age kids transitioned to FFA. This year advising FFA members I had a whole contingent of seniors experience one of their first “lasts” of senior year with their last chance to participate in the Tyler County Fair. The memories of these young people celebrating the end of part of their childhood was certainly a special thing to be a part of.

We had numerous awards given including a new award called the Legacy Showman award, these seniors in high school had shown at each Tyler County Fair they were eligible, since they were in the 3rd grade. Natalie Standley took home the R.A. Jernigan Award for displays of leadership throughout multiple fairs. Natalie was also a Legacy Showman and exhibited the Reserve Champion Swine.

Caleb and Megan Swinney were the top cattle breeders in the county this year, putting three steers in the sale and having numerous wins in the breeding cattle divisions to secure that win for the Swinney Cattle Company when it comes to raising animals right here at home that are competitive and correct.

This was my eighth year as a member of the Tyler County Fair Board, and marks nearly 20 years that I’ve been associated with the fair in some way, and I believe that I can say with near certainty this year was one of our best. There are dozens of people to thank, but I’ll end by sharing what I believe is the most special memory I’ll cherish of this year’s fair.

I’m often proud of our young people, but I had an outside perspective this week that made me feel good about Tyler County. For the past several years, we’ve had a passionate agriculturalist named Megan Dunn serve as our fair photographer.

She has done a fantastic job, and in discussion that I hope she stays with us forever, she told me that she planned to, because Tyler County was such a special place to her. Not only because we were some of the first folks to hire her when she opened her business and trust her, but because she always enjoys how polite and welcoming the people of Tyler County are. She said it’s one of her favorite fairs because she always feels like family when she’s among us here in Tyler County.

There are plenty of voices we could listen to in this ole world that would tell us how bad things are, in the world, in the country, and even right here in Tyler County. Well, this last week, I saw the cream of the crop, the best of the best and the very future of Tyler County on display at the fairgrounds, and I can say without reservations, Tyler County is already pretty great. We’ve got great young people, fantastic volunteers, and supporters, and then when you hear from someone like Megan, you realize that it’s not just that we are good to those who are from here, but that we embrace those who come to make a positive difference. I’m proud to call Tyler County my home, and I don’t know if I could ever express how much I appreciate our county coming together to celebrate our roots and real hometown values in support of agriculture.