GROVETON — In the wake of the reception of unanticipated funds, Trinity County will now seek to hire its own grant administrator to help manage all of its grants, as well as seek new funds for county projects.

The County Commissioner’s Court approved the measure at its June 22 regular meeting.

The position will answer to County Treasurer Bob Dockens, who said that if everything works as it is supposed to, there could be some good-sized checks coming to the county.

The county decided to hire it own, instead of using grant writing services, in order to save funds. Dockens said that in the course of their researching a grant-writing position, they found that  using such services are more expensive — at 10 percent of the grant amount — than a paid position.

The county also voted to rescind its requests for seeking grant services.

The discussion was spurred by the county’s receipt of around $619,000 in funds it was unaware of, and the court discussed how to spend them. The county approved giving each road district $100,000, as well as for a proposed shortfall in the Sheriff’s Office budget and to pay for a cabling project.

In a separate matter, the county received during its public forum the resignation of Precinct 1 Constable Jeremy Alexander.

Alexander said he is accepting a position in the private sector, citing the low pay he is receiving as constable.

CENTERVILLE — The Centerville ISD School Board is loosening the purse strings a bit, just in time for the next school year.

Superintendent Mark Brown said the board approved a new teacher salary schedule at its regular meeting on June 17.

Brown said the board OK’d the measure, one that extends the pay scale from 20 years to 25 years, and gives a 2 percent increase across the scale.

The Centerville ISD School Board meets the third Thursday of the month, changing the meeting date from the third Monday, at 7 p.m. The next meeting is scheduled for July 15.

CLEVELAND — A 39-year-old man threatening to shoot himself was taken into custody by San Jacinto County Sheriff’s deputies on Tuesday morning.

According to a press release from Sheriff Greg Capers, the Sheriff’s Office received a 911 call shortly after 7:30 a.m. Tuesday stating the suspect was in the yard of a residence in the 200 block of Rayburn Street in Cleveland.

The report indicates the man, who has not been identified, was holding a long rifle threatening to hurt himself.

Sheriff deputies and DPS troopers from the Texas Department of Public Safety spoke with the man’s girlfriend, who told police her boyfriend said he was tired of living and threatened to hurt himself.

Deputies contacted the man, who was pacing back and forth armed with the rifle; the suspect reportedly was making statements he wanted to harm himself and wanted to commit suicide by cop, the report states. He also said he was suffering from depression as well as other mental health issues to include anxiety and bipolar disorder.

A negotiator maintained communication with the man while members of the Sheriff’s Office devised a plan to safely end the standoff; after approximately three hours, the man was safely taken into custody with minimal amount of force used after being surrounded by authorities.

The man was transported to a nearby local hospital for a mental health evaluation, the release states.

Capers said he commends the responding law enforcement officials for noting suspect’s intent early as the incident unfolded, and then relied on training and experience in getting the man the mental health support he needs.

This case is still under investigation and charges could be pending.

If you or someone you know needs help, you can call the National Suicide Prevention lifeline at 1-800-273-8255.

HUNTSVILLE — “I LOVE YOU, JIMMY” rang out, along with other exclamations of praise and congratulations, laughter and not a few tears, after the Trinity High School seniors’ processional.

In all, 72 students tossed the mortarboards as they were declared graduates by Principal Brittaney Cassidy.

Salutatorian Emilio Cleveland thanked those in attendance for being there for the students’ final steps in their high-school careers, and the first steps into bright futures.

“The start of this year was different than any year we have experienced,” he said. “It was the first year back from the pandemic, and we had to adapt to the new life at school. Luckily, the faculty supported us the entire way, and on behalf of the class, I would like to thank you for that dedication.”

Cleveland also thanked his coaches for their inspiration, with a coach quoting Zig Ziglar to him: “You can’t have million-dollar dreams with a minimum-wage mindset.”

Hunter Cassidy, the valedictorian, said the year was not an easy one for students or faculty, but the dedication of the faculty help see it through.

“It has taken us 12 years to get to this chapter in our lives, and as this one concludes, I am thankful for all the good times we’ve had together, and to all the memories we have made,” he said. “The friendships we have made will stay with us for the rest of our lives.”

Sitting here today is proof, Hunter said, that they are capable of rising to any challenge.

“Time keeps moving forward no matter what we do,” he said. “Remember, when life gets hard, throws a few curveballs our way, keep your head up and look to the future, because before you know it, you will be there.” 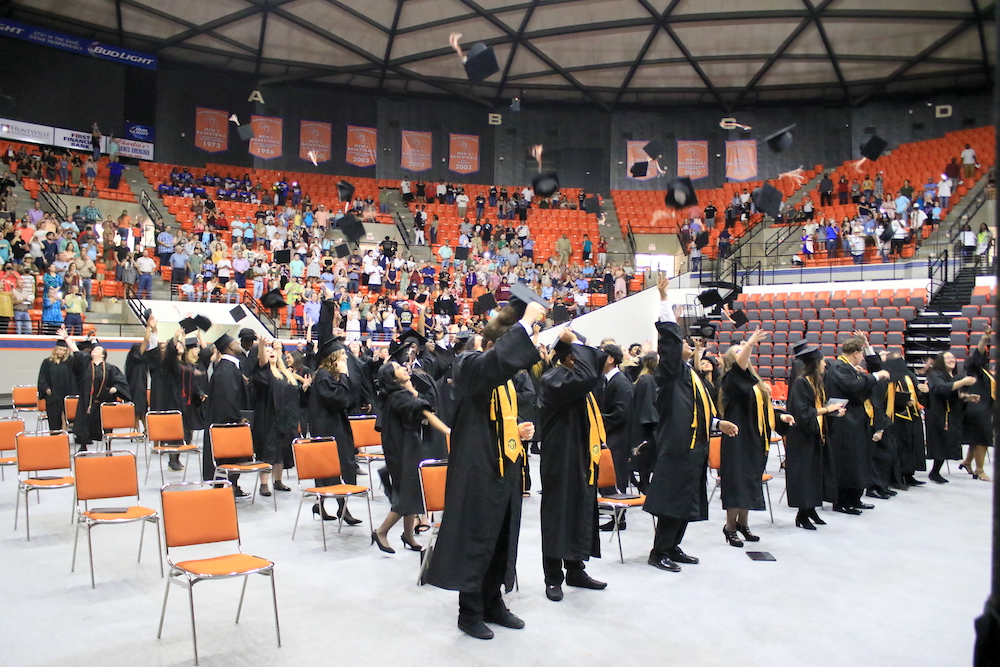 TONY FARKAS | TCNS Trinity High School seniors celebrate their graduation on Saturday by tossing their hats in the air. 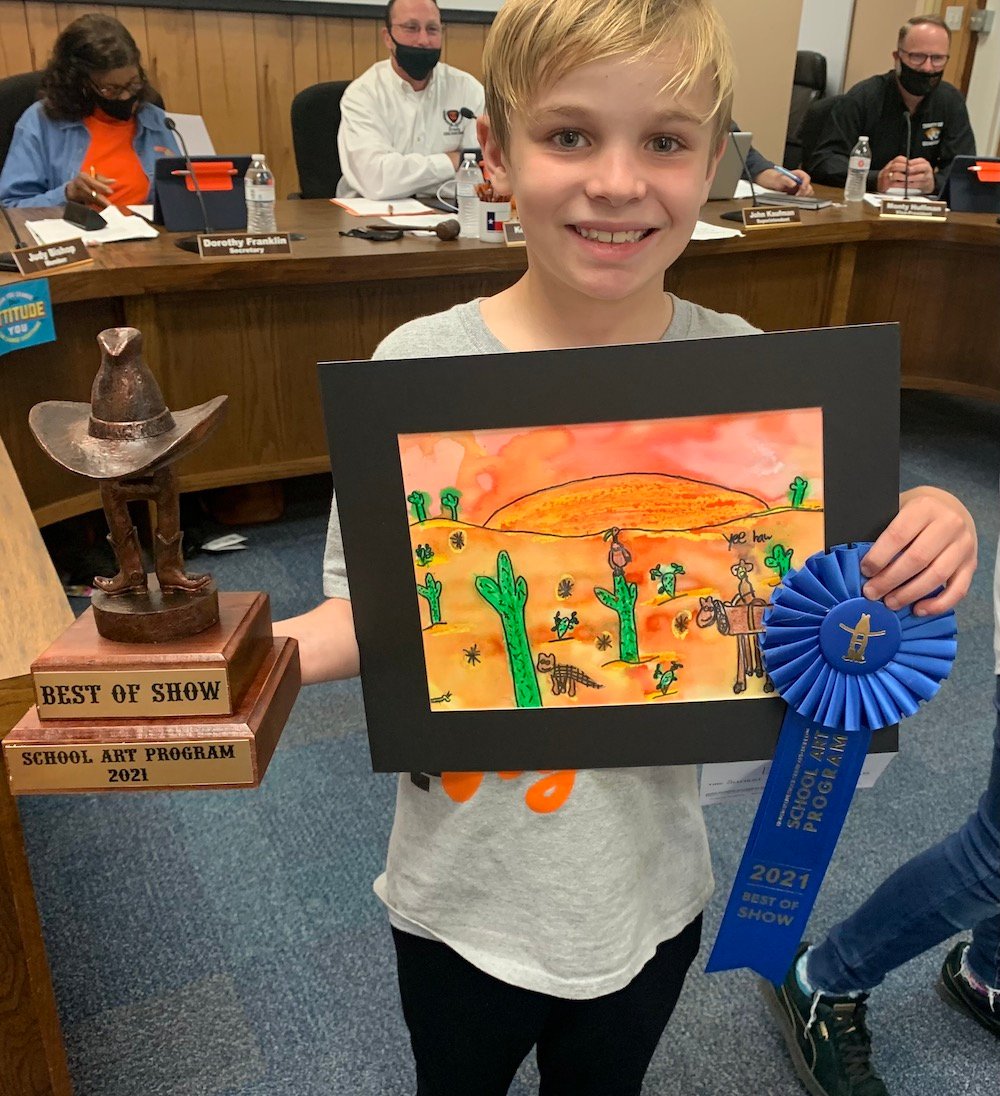 COURTESY PHOTOS | DEBBIE OGDEN Case Robinson was very happy to show off his trophy and ribbon, won in the Houston Rodeo art contest.

TRINITY — The Trinity ISD Board of Trustees is taking off the mask — optionally.

At its regular meeting on May 24, the board approved making mask use optional, effective immediately, said Superintendent John Kaufman.

“This was on agenda before the governor’s mandate,” he said. “We felt that with the availability of vaccinations, it was time to relieve some of the requirements.”

Staff, students and visitors now have the option to wear masks.

In a separate matter, Kaufman said he was given permission to begin researching the district use of school uniforms.

Kaufman stressed that this is the beginning of a process, and any implementation of a policy is a long way off.

“I will start by formulating a parent survey of five or six questions, and later send that out throughout the district,” he said. “We’re a long way off at looking at that; it may not get past the parent survey.”

The rationale that was given for a uniform dress code was to help boost student self-esteem, school pride, the ability to have everyone on a level playing field, and increased attendance.

“The premise for uniforms is pride; they put everyone on a similar playing field where kids aren’t being made fun of for their dress, or harassed because of economic status,” Kaufman said. 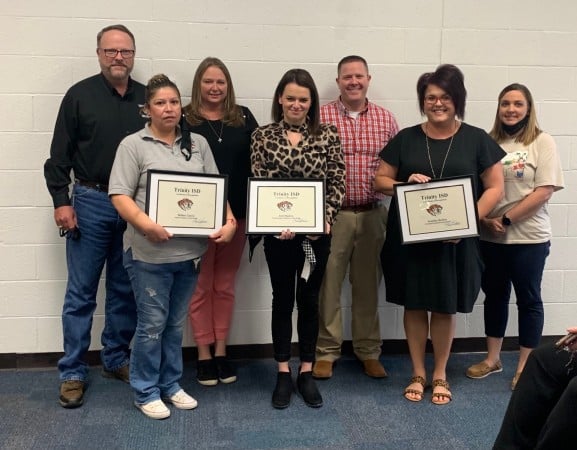 COURTESY PHOTOS | DEBBIE OGDEN Melissa Garcia, Joni Madera and Jennifer Harlow were named Employees of the Month for May. Each one received a certificate and $100; on June 7, at the End of Year… 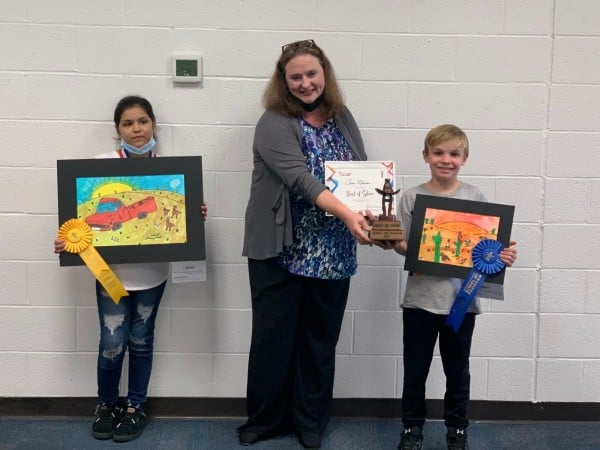 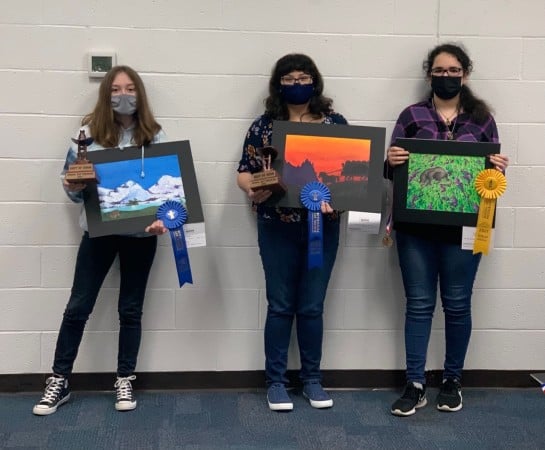 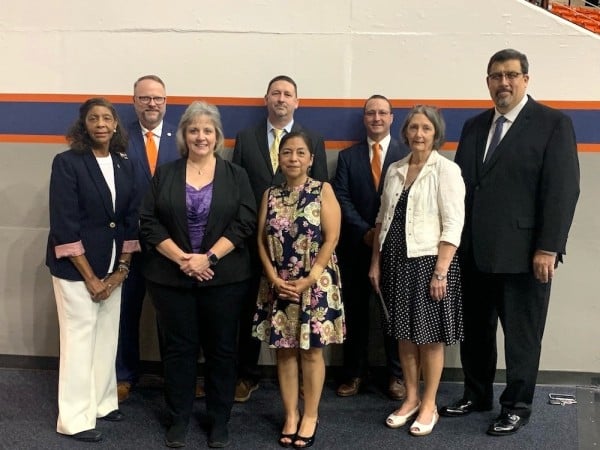 COURTESY PHOTOS | DEBBIE OGDEN The Oath of Office was given by Debra Ogden to Judy Bishop and Elizabeth King following their re-election to the Board of Trustees for the next three years. Both ladies…