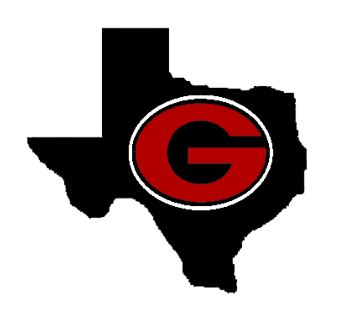 GROVETON — The Groveton ISD Board of Trustees approved a tax rate that is lower than that of the last fiscal year, meaning property owners will see less on the bill.

The board approved the measure, as well as the certified tax rolls for both Houston and Trinity counties, at its regular meeting on Aug. 23.

Superintendent Don Hamilton said there will be very little change in the budget from last year as well.

ESSER grants helped keep budgeting needs low, which means the proposed tax rate is .9401 per $100 valuation, down from the current rate of .9664 per $100, he said. Hamilton said it will be about 6 cents per $100 less for property owners.

He also said that the money used to give raises would be offset by a decrease in staff due to positions not being filled.

•approved the district improvement plan for 2021-22;

•approved a notice of intent to file for additional ESSER funds;

•discussed continuing a federal policy of emergency sick leave, which ended recently, of granting 10 days of leave in COVID cases; and

•discussed the opening day of school, which showed that the district had 761 students enrolled, slightly above last year’s figure. 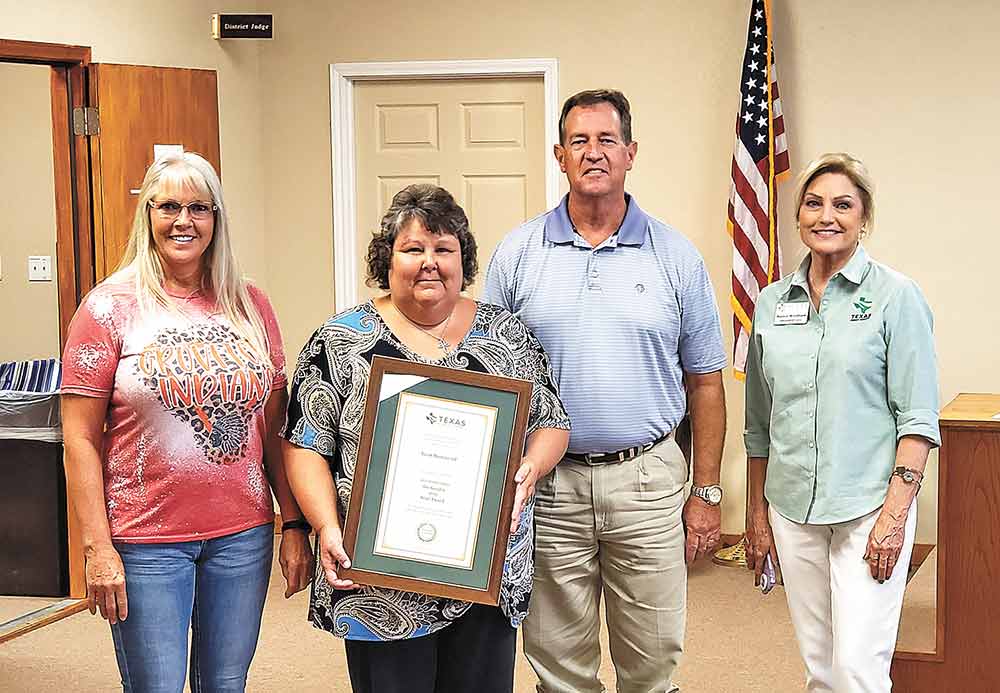 Susie Hammond receives the 2020 Do-Gooder of the Year award from Texas Forest Country CEO Nancy Windham for her efforts to help the area during the COVID crisis. Photo by Tony Farkas/TCNS

GROVETON — The Deep East Texas Council of Governments will spend about $21.5 million dollars in the next fiscal year in its mission to assist the counties in the area.

The budget was approved by members at an Aug. 26 meeting, which was held in Groveton. DETCOG meetings rotate through counties.

Executive Director Lonnie Hunt said the budget reflects a 30.26 percent rate for indirect costs — administration, finance and IT — which is the lowest it has been in years.

“Most of this is very similar to last year,” he said.

The budget reflects revenues of about $21.7 million.

Separately, Hunt discussed problems that he felt occurred in the U.S. Census, which impacted all counties except Nacogdoches, Polk and San Jacinto negatively.

Those figures show that Polk County grew by 4,710 on the high side; however, Newton County dropped 2,228, or more than 15 percent. 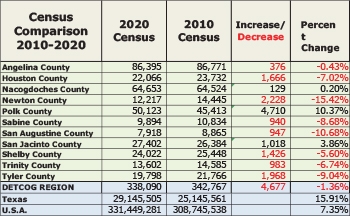 Census figures for the 11 counties in the Deep East Texas Council of Governments. Graph courtesy of DETCOGOverall, the Census figures show that there was a 1.36 percent dip in population for the 11-county DETCOG region, while Texas grew at a rate of 15.91 percent, or more than 29 million people. Hunt said that Census was biased against rural areas, meaning the process was flawed.

He said that many entities actually showed an increase in population, but the only figures that matter are the Census numbers. This could mean that East Texas could lose representation in the Texas Legislature, and possibly even at the federal level.

• discussed the impact of COVID-19 on the workforce of East Texas;

• approved paying $341,000 for aerial photography to assist appraisal districts and 911 mapping efforts, and $76,499 for Microsoft software licensing; and

• discussed an allocation of $161,542,000 for Hurricane Harvey CDBG-Mitigation, which will become available for counties affected by the Hurricane, which includes Jasper, Newton, Polk, Sabine, San Augustine, San Jacinto and Tyler counties.

GROVETON — The City of Groveton looks to enact an extremely modest hike in its tax rate for the FY 2021-22 budget.

Currently at .9341 cents per $100 of property valuation, the city is looking to enact a .9479 cents rate. The numbers were discussed at a special budget meeting on Aug. 9.

Mayor Tommy Walton said that increase only will raise an additional $7,000 in additional revenue for the city, or about $13.80 per $100,000 valuation on a home.

“We’re going with what is called a voter approval rate, the highest rate we can charge before having to put a referendum before the voters,” he said.

The small amount of revenue is because the city’s tax base is so small, but won’t become official until it is approved at the next meeting, Walton said. That number could change as well between now and then.

Walton said the proposed budget includes cost-of-living raises for city employees get modest, which will vary from 1 to 3 percent. The city also hopes to budget for a new salary scale for a police chief and possibly two police officers.

The largest increase will be in funding for road base material, Walton said, as well as funds for outfitting new trucks for the Fire Department. He said there really is no more additional spending.

“We’re looking at new water meters, but that is a capital improvement item, not a budget item,” he said. 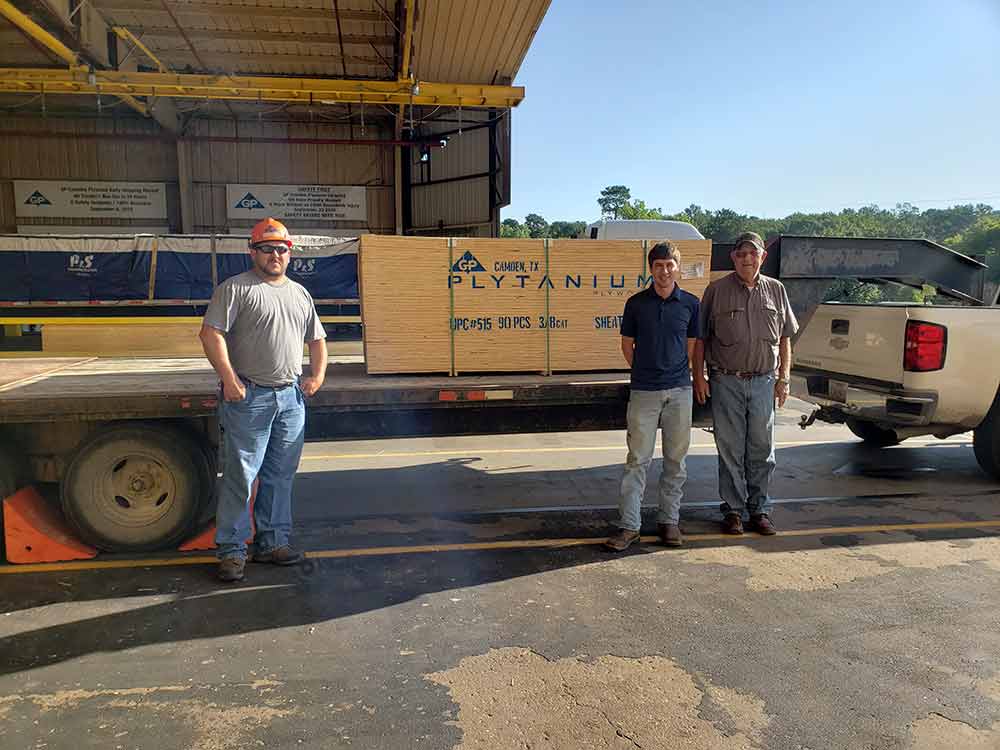 CORRIGAN — Georgia-Pacific is helping students build a better future by contributing to schools’ building and trades and Future Farmers of America programs.

Recently, the local building products company provided plywood to the students at Groveton Independent School District to build various projects, including feed troughs and deer stands. The students sell their crafts to the community and, in return, raise funds for their FFA chapter.

This is just one of many East Texas schools receiving GP products like plywood, lumber and particleboard each year for school projects.

Based in Atlanta, Georgia-Pacific and its subsidiaries are among the world’s leading manufacturers and marketers of bath tissue, paper towels and napkins, tableware, paper-based packaging, cellulose, specialty fibers, nonwoven fabrics, building products and related chemicals.

Its Georgia-Pacific Recycling subsidiary is among the world’s largest traders of paper, metal and plastics. The company operates more than 150 facilities and employs more than 30,000 people directly, creating approximately 89,000 jobs indirectly.

Tattoos cause concern for one board member

TRINITY — The Trinity ISD School Board approved an employee dress code, but not before the policy regarding tattoos was questioned as being discriminatory.

The new policy was being discussed at a special meeting on Aug. 9.

Superintendent John Kaufman the purpose of the code is for the staff, especially teachers, to project a professional image.

“That’s my whole objective of this policy,” he said. “I want everyone to dress professionally, to look professional.”

Board Member Ricky Hortman said that he had issues with the policy, because in this day and age, tattoos are mainstream.

“We’re going to discriminate against people who have tattoos? A person can’t be professional if they have tattoos?” Hortman asked. “I would hate to lose a … teacher because of a tattoo. We have lots of other issues than to worry about this.”

Hortman said times are changing, and other entities, such as police departments, are rolling with those changes.

Kaufman said that covered tattoos have been in the code for as long as he can remember, and the district hasn’t lost any teachers because of it.

“We’re just like any other organization; there is going to be rules to abide by,” he said. “Working at McDonald’s, they have standards too. I don’t think that showing tattoos looks professional. I’m not saying it has anything to do with the way a teacher does their job; we have a lot of teachers that have tattoos now. They understand they have to be covered.”

Other changes to the police include requiring coaches to be in professional dress while walking the halls, no shorts are allowed in the classroom. Also, there are to be no more than two piercings in each ear for both male and female staff, and no nose studs or rings.

The board voted 5-1 to approve the code, with Hortman voting against the measure. Board Member Maggie Trevino was absent.