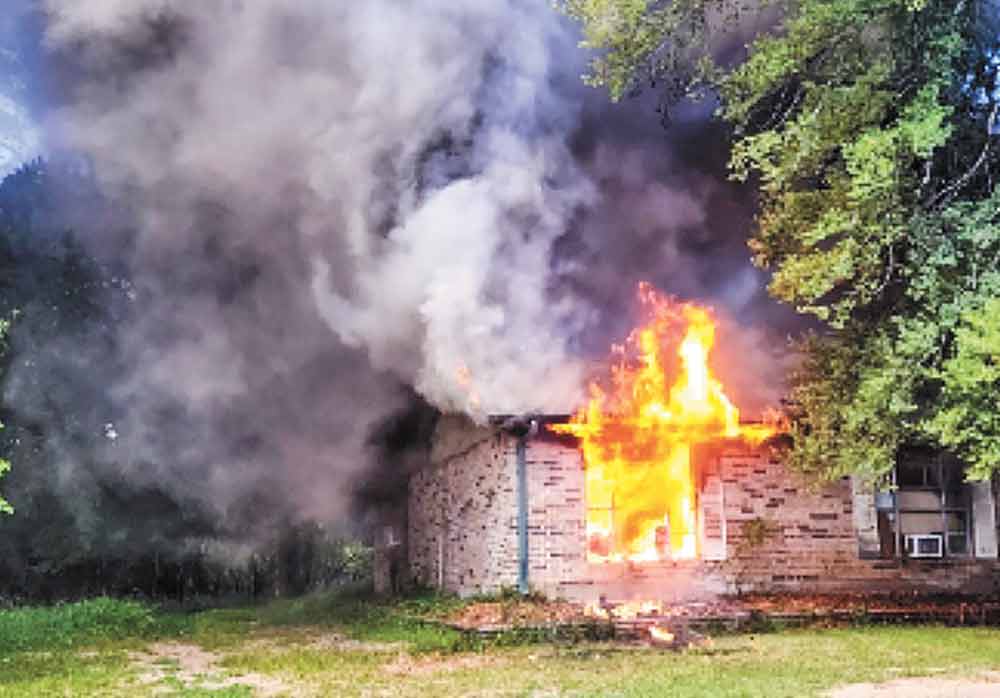 Trinity firefighters battled a blaze at a home on Falcon Street they believed was caused by a faulty air conditioner. Courtesy photo

Assistant Fire Chief Keith Johnson said the Trinity Fire Department responded to the structure fire in the Pinecrest subdivision on Falcon Street with three trucks and 14 firefighters. They contained the fire in about 20 minutes.

Even though the fire was extinguished quickly, the damage to the home and its contents was extensive. Resident Laura Thrasher and two others were able to exit the building during the fire, and no injuries were reported.

Johnson said the blaze possibly was caused by a malfunctioning window air conditioner. 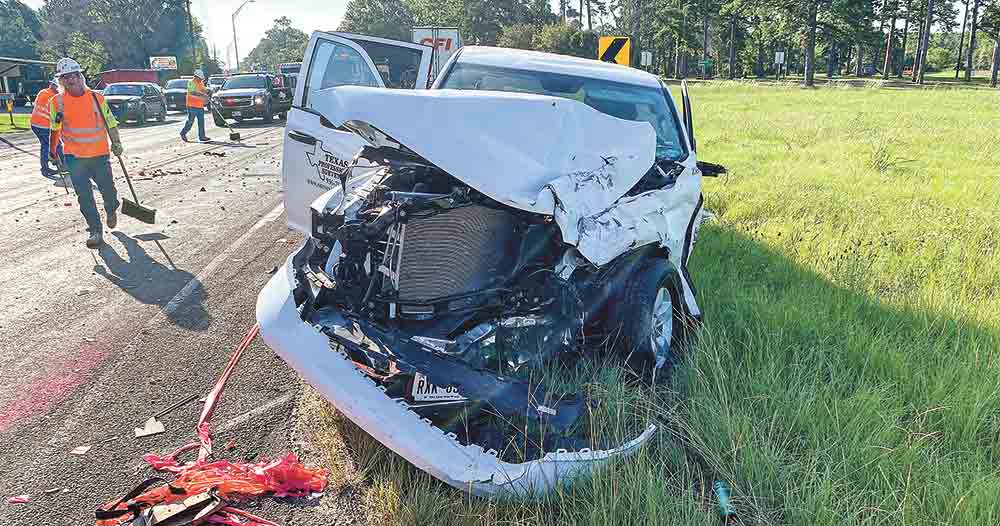 A pickup truck was severely damaged in a crash involving a semi. Courtesy photo

The driver of the truck tractor, identified as 47-year-old William Lejeune of Columbus, Miss., was not injured.

The driver, identified as 20-year-old Blake Gresham of Houston, and two passengers were transported to CHI St. Luke’s Health Memorial for treatment.

This is an ongoing investigation. 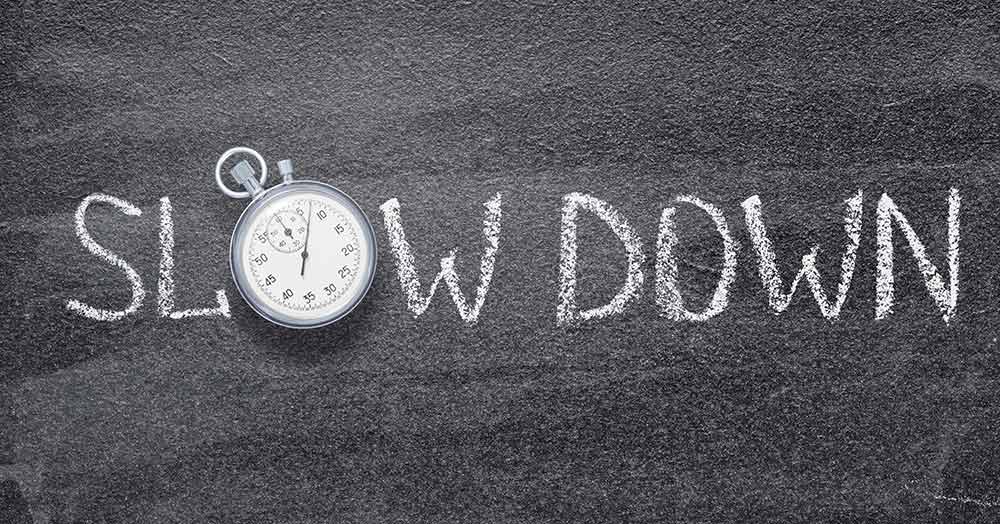 AUSTIN — Motorists headed out for one last summer holiday should remember that state law requires them to slow down or move over when tow trucks and other emergency vehicles — police, fire, EMS and highway response trucks — are stopped on the side of the road with their lights activated.

If a road has more than one lane traveling in the same direction, drivers must move out of the lane closest to the emergency vehicles stopped on the road OR slow down at least 20 miles per hour below the speed limit.

The Texas Department of Licensing and Regulation regulates the towing industry as well as the Driver Education and Safety program.

Safety tips for driving this Labor Day weekend (or any day, really):

•Slow down and pay attention to what you’re doing. If you get tired, pull over in a safe spot and walk around to re-energize.

•Don’t drink and drive, even a little bit.

•Stay off the mobile phone — this includes texting. Designate a “co-pilot” to oversee the phone while you’re driving so you can concentrate on the task at hand.

•Stay weather-aware. Turn around and don’t drown if water is running across the road. Only two feet of rushing water can sweep away a vehicle.

•Leave plenty of time to get to your destination. Roadways are likely to be crowded. 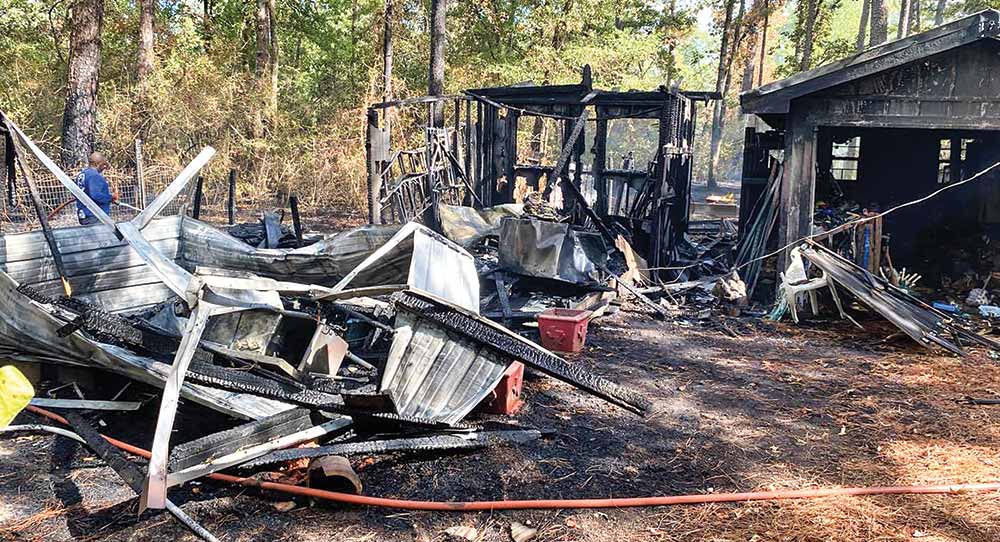 A fire that hopped property lines and destroyed this outbuilding resulted in the arrest of a resident of The Woodlands on a charge of arson. Courtesy photo

TRINITY — A resident of The Woodlands faces felony arson charges for a fire that damaged structures on Brown Lane near Westwood Shores on Aug. 16.

Jerome Bernard Toenjes, 67, is facing a charge of arson of a building recklessly damaging a building belonging to another.

Sheriff Woody Wallace said the suspect was burning logs and limbs on his property, and the fire jumped property lines burning a neighbor’s buildings.

According to reports, Deputy J. Scott Moore was dispatched to Brown Lane in the Westwood Shores neighborhood where Trinity and 356 fire departments were battling a large brush fire.

Moore said in the report that several acres were on fire with multiple fire units working. One structure, owned by Leroy Brown, was completely burned.

The structure was a wood-framed shop/storage building detached from the main residence; however, Moore was shown a burn pile of several large logs and fence posts on the nearby property at 126 Brown Lane.

Moore said it appeared to have been burning for an extended period of time.

According to fire department personnel on the scene, it appeared that the burn pile had gotten out of control, igniting dry vegetation nearby. This caused the fire to rapidly spread, cross property lines onto Mr. Brown’s property, damaging the building.

Moore said he located Toenjes, who said that he had been burning the pile “a couple of weeks ago” but denied lighting the fire on Aug. 16. Since the burn ban has been in place for several weeks, Toenjes was arrested.

“The man has been arrested and is now facing felony charges for ignoring the burn ban and recklessly causing destruction,” Wallace said. 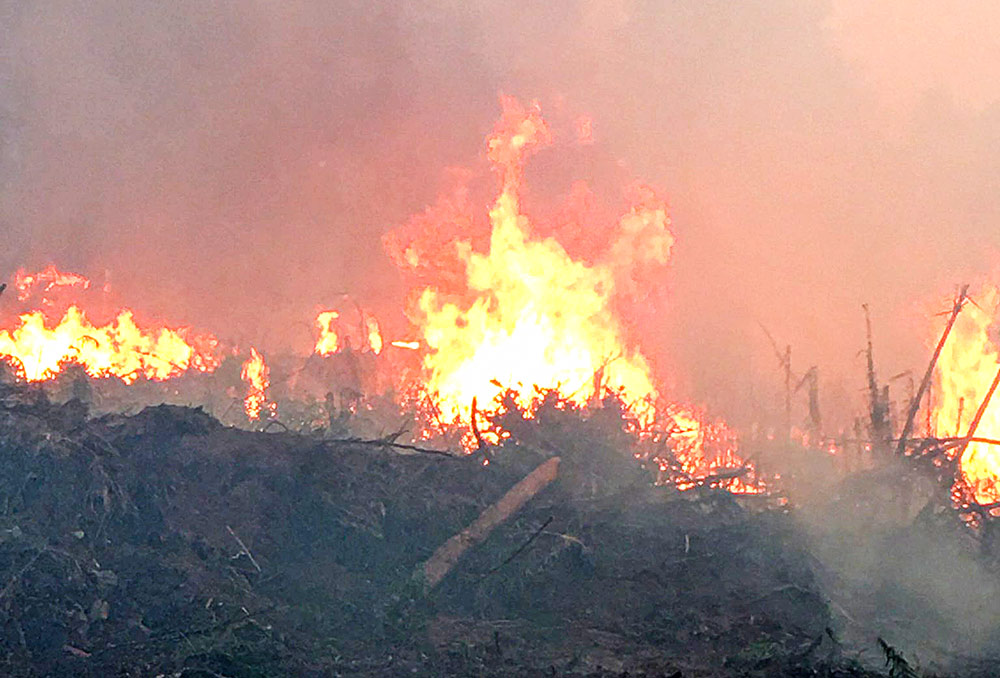 TRINITY — Trinity firefighters responded to eight fire calls over the weekend, including four calls on Friday in 100-degree-plus weather, and the department asks all county residents to please not burn under any circumstances.

A burn ban exists in the county, and dry conditions make any fire hazardous.

Assistant Fire Chief Keith Johnson said that at about 11:30 p.m. Saturday, a transformer exploded on FM 356 at White Rock Acres.

Firefighters found two high-power transmission lines from Entergy broken and draped over lines belonging to Sam Houston Electric Co-op; the event started a four-acre fire in the nearby woods.

Johnson said the fire was contained in approximately an hour and units stayed on scene until 3 a.m. putting out hot spots. Entergy and SHECO responded with line crews to shut off power and make repairs.

No injuries were reported and no structures were damaged.

Johnson said that another fire broke out at around 2 p.m. Saturday behind Heath and Human Services building on Highway 19 South.

This fire damaged the back wall of a barn and endangered the DHS office and a vacant home next door. The VFD responded with five trucks and 14 firefighters and quickly extinguished the fire before it could extend into other structures.

Texas Forest Service also responded with three bulldozers and manpower as well as a spotter plane.
The fire was 95 percent contained around 10:40 p.m.

Johnson said no structures were damaged and no injuries were reported.

On Monday at about 12:53 p.m., Trinity firefighters were dispatched to a grass fire at Trinity Plantation. Three trucks and 15 firefighters responded and extinguished the fire in less than 10 minutes.

Johnson said the fire possibly was caused by a tractor cutting grass.

The fire on FM 356 reignited Sunday after a dead tree limb that had been smoldering dropped and fell across the fire line. A grass fire started Monday near Trinity Plantation. Bulldozers from the Texas Forest Service create a fire line.