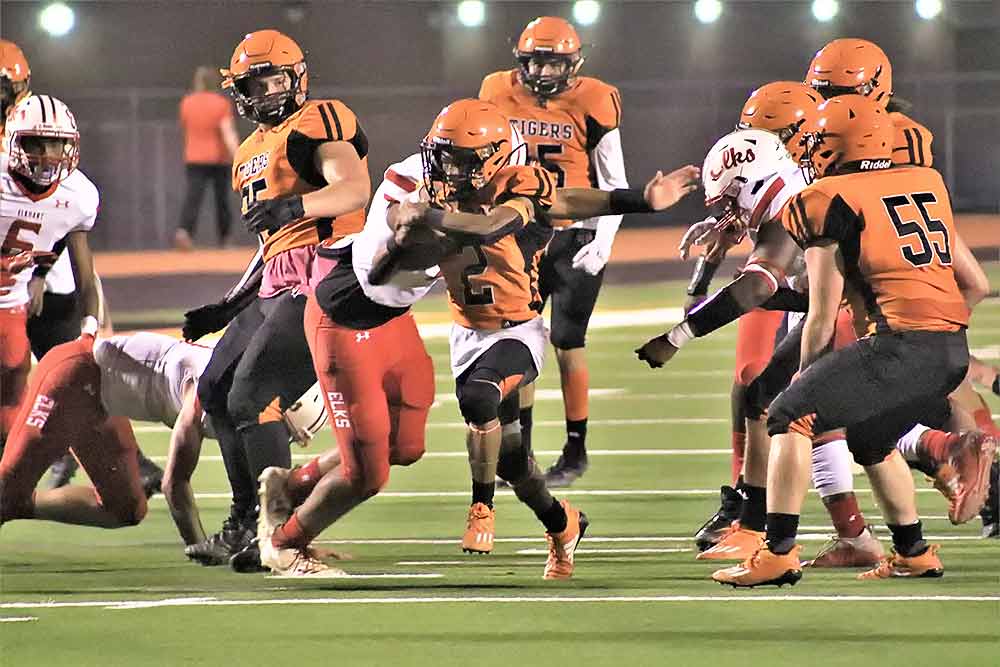 Trinity’s Juju Clayborne (No. 2) picks up some yards during the Tigers’ Homecoming game on Friday. The Tigers were edged out 29-28 on the night. Photo by Tony Farkas.

TRINITY — The Tigers celebrated Homecoming Friday night against the Elkhart Elks, and took the field with a passion that left the fans happy.

The Tigers were able to move the ball at will against the Elks, but penalties and turnovers kept them out of the end zone during the first half. The defense had its best first half performance of the season by limiting the Elks to 14 points and keeping the Tigers within striking distance to take the lead.

The Elks started the third quarter with the ball and drove the ball to the Tiger 33-yard line when Kaden Barnes intercepted a fourth-down pass in the end zone and set up the Tiger offense on the 20-yard line. The Tigers were able to take nine plays and march down the field and score their first touchdown of the game off a 24-yard screen pass from Cole Caldwell to JuJu Clayborne.

The Elks were able to answer on the first play of the fourth quarter and take a 22-6 lead. The Tigers next drive took just two plays a 69-yard run by K.D. Goodall set up Andrew Crabtree for the 6-yard touchdown run. Trailing by 8 points, the Tiger defense forced the Elks to punt the ball back to the Tigers. Six plays later, Clayborne broke free for a 10-yard run to tighten the score to 22-20 with 6:57 left to play.

Again the defense came up with a stop on the Elks and forced a punt. Taking over with 2:42 left in the game, the Tigers needed one score to take the lead and four plays later, Goodall broke free for a 33-yard touchdown they gave the Tigers their first lead of the game with 1:41 left to play.

The Elks took over on their own 25-yard line and using all three of their timeouts, were able to get the ball to the Tiger 36-yard line. The Tigers were able to force incomplete passes and a run for no-gain and set up the Elks with a 4&10 from the 36-yard line with only :28 left to play. The Elk quarterback was able to find an open receiver in the end zone for a game tying touchdown. The extra point kick became the deciding factor in the game as the Elks were able to win a 29-28 nail brighter as the clock wound to zero.

An emotional Tiger team met after the game as Coach Patrick Goodman expressed how proud he was of the effort put forth and stressed that turnovers and untimely penalties were the deciding factors in the game.

The Tigers will travel to Palestine Westwood Friday Night, kickoff is set for 7 p.m.