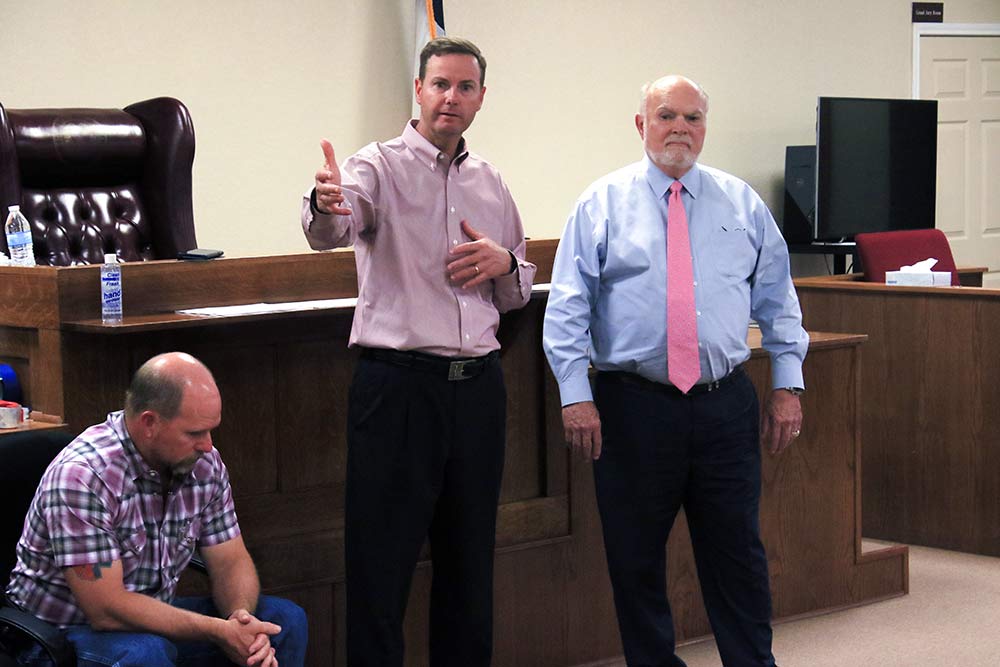 Rep. Trent Ashby (right) and Sen. Robert Nichols discuss some of the successes of this year’s legislative session during a Town Hall meeting recently. (Photo by Tony Farkas/TCNS)

GROVETON — During a brief two-week respite between legislative sessions, area legislators gave updates to their constituents about the work being done — before having to return to Austin for a third special session.

“I feel like I’m in the session that will never end,” Nichols said.

Nichols recounted some of the larger issues that was dealt with during the main session — Winter Storm Uri, and how our electricity grid was so vulnerable; a voter integrity bill that made it harder for people to cheat, and that Texas is now a Second Amendment sanctuary state.

However, one big area of concern which flew under the radar was spam and telemarketing calls, which Nichols said was a problem for himself as well. After looking into the matter, he supported, and the Legislature passed, the Respect Your Privacy Act.

He dubbed that Phase 1.

I kept hearing that TxDOT was selling a lot of this information, and as chairman of the Senate Transportation Committee, I focused on DPS, DMV and TxDOT.

When I talked with the DMV, I was upset to find out that so much information about my personal vehicle was being shared. I found that people could get where I bought my car, how much I paid for it, which bank has a lien on it and how much the lien is.

About 70 entities were getting that information from the state. You might as well give it to Google. I said we weren’t going to do that anymore.

TxDOT wasn’t really selling anything, except the subscriber list for Texas Highways magazine, and then I went over to DPS and found 1,100 different entities get everything that’s on your driver’s license, which then turns around and does something else with it. That ticked me off. They got $67 million a year for doing that.

Nichols said that years ago, the Texas Legislature passed bills requiring the sale of that information. He also said that Phase 2, next year, which will take on the state Nursing Board which sells information.

Ashby also touted this session as one of most pro-life session ever in the state of Texas.

“One bill bans any abortions once you can detect a heartbeat in that mother’s womb,” he said. “Doctors say that’s right at 6 weeks, and that is not law in the state of Texas. Secondly, we passed a bill in response to what’s happening at the U.S. Supreme Court; it appears they may be getting ready to take back up a bill like (the heartbeat bill). We passed — preemptively — a bill that states if Roe v. Wade is overturned, within 30 days of that Texas will ban all abortions.”

Ashby said that was done because they want to protect life.

Broadband internet measures passed, which were co-sponsored by Ashby in the House and Nichols in the Senate. Within a year, there will be a plan, and internet service providers will begin the process of upgrading all internet access to high-speed.

Aside from banning boys from participating in girls sports, the Legislature will take up redistricting in the next special session. He said that there was a huge undercount in this year’s Census, but since those are the numbers he has to work with, he will have to find about 30,000 residents to keep his district intact.

For Nichols, that number is even higher.