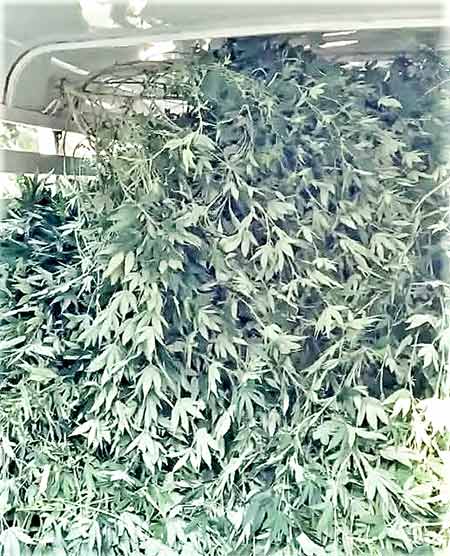 Numerous pot plants were seized, and six arrests made, during a drug bust on Thursday and Friday near Trinity. (Courtesy Photo)TCNS staff

TRINITY — The Trinity County Sheriff’s Department labored over the weekend investigating a shooting and complaints about drug use and manufacturing.

Sheriff Woody Wallace said that on Sept. 2, a man was shot three times after three men began shooting at each other on Camp Branch Road east of Trinity.

Wallace said on Facebook that they found the victim, whose name has not yet been released, at a house that reportedly is connected with methamphetamine use.

The victim was Lifeflighted to a hospital for treatment. The other people involved in the shooting have not yet been identified, as the investigation is continuing.

Following the shooting reports led law enforcement officials to a complaint of suspicious activity in four homes in the 100, 200 and 300 blocks of Cherry Creek in the Lake L subdivision.

The homes had been equipped with special air conditioning, water equipment and lighting, along with CO2 canisters, which reportedly will increase the THC content of the marijuana.

The homes, equipment and contents have been seized, and six people were taken into custody:

Wallace said the suspects were mostly from Cuba or Mexico, and many may not be in the country legally.

More information will be available as the investigation continues.