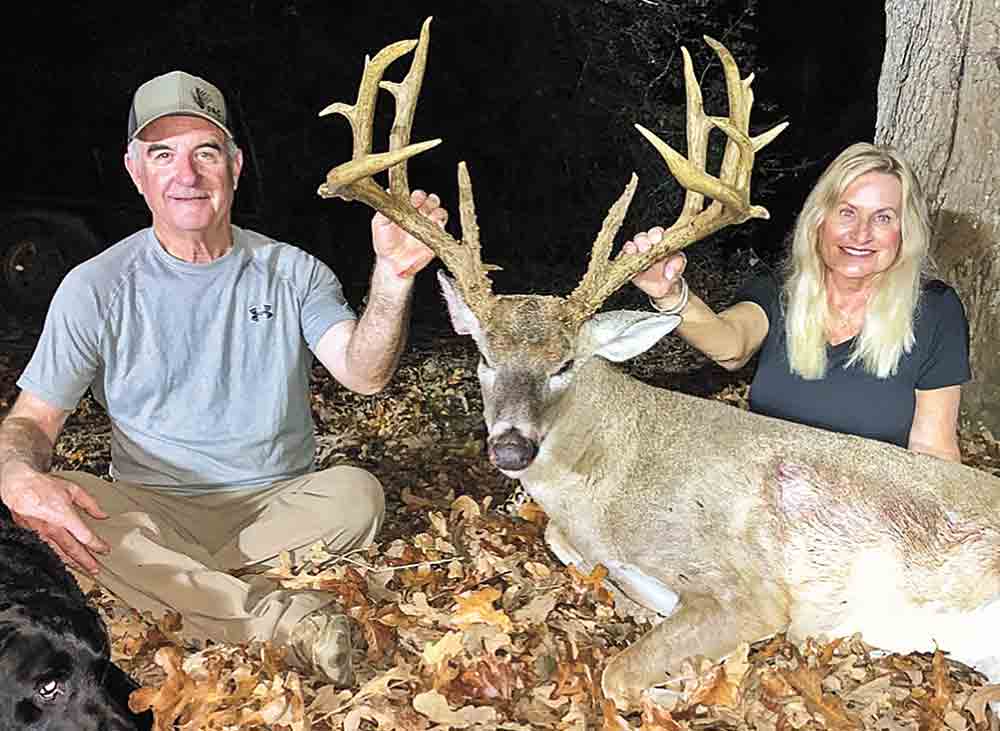 There is much to love about a Texas deer season.

Never mind the descriptive prose about crisp fall mornings and rattlin’ horns. Or the magic of witnessing the dawn of a new day from the confines of a tall tower blind overlooking good deer country.

I’m a bigger fan of tales about whopper bucks. Especially fascinating are reports of free-ranging animals that somehow manage to grow magnificent antlers despite stacked odds against them, as was the case this year.

Whitetail bucks always begin growing new antlers soon after they shed their old ones, usually in late winter and early spring. Experts normally forecast optimum quality during years with adequate rainfall in late spring and summer. The timely moisture spurs nutritious forage across the landscape to keep deer fat and sassy while fueling the growth of antlers, the fastest growing bone material in the world.

The 2022 drought made things especially tough on Texas deer and the habitat vital to spurring antler development, a months-long process that typically spans March to August. Likewise, the general belief ahead of the 2022 season opener was that antler quality was almost certain to lag statewide.

Though overall antler quality may be down somewhat this year, there have still been a number of outstanding bucks tagged by hunters around the state. That comes as no surprise to Alan Cain, white-tailed deer program leader with the Texas Parks and Wildlife Department.

“This is Texas and we’ve got some of best deer hunting in the country,” Cain said. “What we are seeing this year is a testament to our hunters. More and more of them are doing good jobs of managing age structure, habitat and deer numbers. That translates to healthier deer herds, so you are still going to seesome good quality animals show up even during drought years like this one.”

Cain added that much of the credit hinges on the fact that more hunters are holding off pulling the trigger on young bucks.

“Hunters are letting a lot of the young bucks get some age on them, whereas 15-20 years ago a lot of people were shooting the first yearling buck they saw with six points,” he said. “It’s not that way anymore. Hunters have learned that age is important if they want quality deer.”

The Texasbuckregistry.com website is bustling with quality Texas bucks. Around since 2012, the web portal was established by Tompall Glaser of Austin to provide hunters a central location to post photographs, measurements and other harvest information on Texas whitetails and mule deer.

TBR deer are sorted by county and region for easy browsing. There are no antler size restrictions and entry is free. TBR also maintains social media pages on Facebook and Instagram.

The TBR database currently contains information on more than 4,600 Texas deer dating back to 2012. The Hill Country, South Texas and Cross Timbers account for the most entries, followed by the Panhandle/High Plains, Oak Prairies, Post Oak, Pineywoods and Trans Pecos regions.

Many of the entries are accompanied by short stories leading up to the harvest.

Shanda Moore and Everett Sunday can relate to the age=antler mantra.

Moore is a lady hunter from Lufkin who shot a man-size buck in Trinity County earlier this season. The 21-point non-typical has been officially scored at 185 7/8 gross, according to Texas Big Game Awards scorer Ben Bartlett of Lufkin.

The official TBGA net score is 175 6/8. It ranks among the top TBGA non-typicals from the Pineywoods this season and may be the biggest free-ranging non-typical brought down by a lady hunter in the region since Walker Country huntress D’Ann Adams shot a 200 1/8-inch bruiser in 2010.

There’s a good story behind Moore’s 6 1/2-year-old buck, fittingly nicknamed “Dog Catcher” because of a unique tine that grew upwards near the base of its left antler as a 4 1/2-year-old. The buck spent much of its life roaming on the 5,400-acre lease Moore shares with nine other members.

The club is part of an 18,000-acre co-op, where like-minded hunters manage for quality bucks. Hunters on Moore’s club are encouraged to lay off of bucks until they reach 5 1/2 years old, unless labeled culls or placed on the “don’t kill” list for one reason or another. They also feed protein during the off season to promote optimum antler growth.

Club managers estimated Dog Catcher was a 150-inch main frame 9-pointer with a few kickers at legal age, but elected to give the deer an extra year to see what happened. The decision was a good one, according to Moore.

“He really blew up this year,” she said.

The buck was so impressive that Moore’s husband, Rodney, spent roughly 63 hours over five days hunting him during the October early Managed Land Deer rifle season with no luck. He got word of an archery hunter on an adjacent lease who actually drew on the buck at 15 yards, but was unable to shoot before it disappeared on the heels of a doe.

“I never saw him once in all those hunts — he went completely nocturnal on me,” he said.

Lady Luck looked Shanda’s way on the afternoon of Nov. 4. She said her husband had a hunch the buck may have relocated to an area around his “Condo” blind and gave her the green light to hunt it.

She said the buck stepped out 30 minutes before dark, about 145 yards away at the edge of a power line crossing. It offered a broadside shot she wasted no time in taking. The deer piled up about 40 yards away.

“I have to share joint custody of this one with Rodney,” she chuckled. “He taught me everything I know about hunting, and he set me up just right. I really wish he could have killed him, but he was adamant about me pulling the trigger if he stepped out. It was bittersweet, for sure.”

Matt Williams is a freelance writer based in Nacogdoches. He can be reached by e-mail, This email address is being protected from spambots. You need JavaScript enabled to view it..