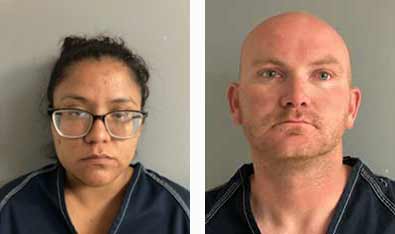 In a statement, Trinity County Sheriff Woody Wallace said that his office has been investigating the disappearance of Clayton James Waters, 56, and Karen Sue Waters, 60, since Sept. 16.

Wallace said that on Sept. 16, his office received a report that Clayton Waters had failed to report to work for several days; during a search for Clayton, investigators found Karen Waters also was missing.

The circumstances surrounding the disappearance led investigators to believe the two being missing and not in communication with anyone was not voluntary, since their modes of transportation known to either subject has been accounted for and no indications of travel have been uncovered, Wallace said.

On Saturday, the remains of the two missing people were found; Wallace did not immediately release details of the deaths.

“It’s sad that this happened in Trinity County, but the people responsible for it are in custody,” he said. “It’s not illegal to disappear. It’s illegal to be made to disappear.”

Wallace did say the suspects have given a complete confession, but the investigation still is ongoing. He pointed out the work done by Jeremy Carroll, Richard Harrison, Mark Cole and others, and the Montgomery Sheriff’s Office which sent investigators to help, as instrumental in solving the case.