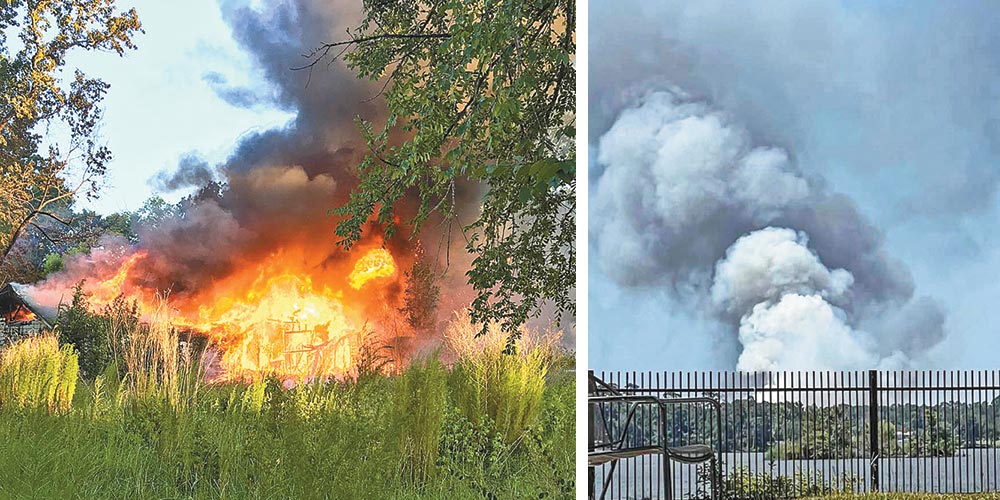 A home is engulfed in flames after a fire broke out on June 19. Smoke from a forest fire could be seen from a distance. Courtesy photos

Fire departments from all ends of the county battled blazes throughout last week, largely due to storms that produced lightning but no rain.
Trinity Fire Department Assistant Chief Keith Johnson said the fire over this last weekend covered 207 acres of wooded land.

It also was the second time the department responded to the area, as a fired had broken out, again due to lightning, on June 18, which involved 25 acres of wooded area in the area of Pineland Drive and Highway 94.

“We’ve had a lot of dry thunderstorms, which produce lots of lightning in the trees but no rain, he said.

The first fire had been contained in 3 ½ hours. The second, also caused by lightning, occurred on Friday, and on Saturday firefighters were called again for the same area.

Johnson said they were paged out before 4 p.m. Saturday, and they could see the smoke from a distance. The Texas Forest Service was out with a couple of bulldozers making a fire break, and Trinity VFD was protecting a structure.

“We thought we had it contained, but wind came up and the fire spread fast,” he said. “It even crossed the road on 94. Pineland Drive has six residences, and fire was headed that way.”

By Sunday afternoon crews had the blaze 100 percent contained, but still it was smoking on Monday.

Johnson said a fence along 94 melted, but that was the only damage to property other than the forest. The Texas Department of Transportation had Highway 94 shut down for about 3 hours during the fight. No evacuation ordered, but some residents left on their own.

Lightning and dry conditions caused the fire to consume about 207 acres, and Johnson said that county resident need to be extremely cautious.

“I know the Fourth of July is coming up, and even though it’s not illegal to buy fireworks, it still is dangerous to light them off in the dry weather,” he said. “Please be careful.”

On June 19, also on Highway 94, an abandoned home was destroyed by fire.

Johnson said the fire broke out that afternoon off Hwy 94 before high school. A total of five fire units and 15 firefighters responded, and when they arrived, the house was engulfed in flames.

Johnson said no one was living in the house at the time of fire, and it was total loss. 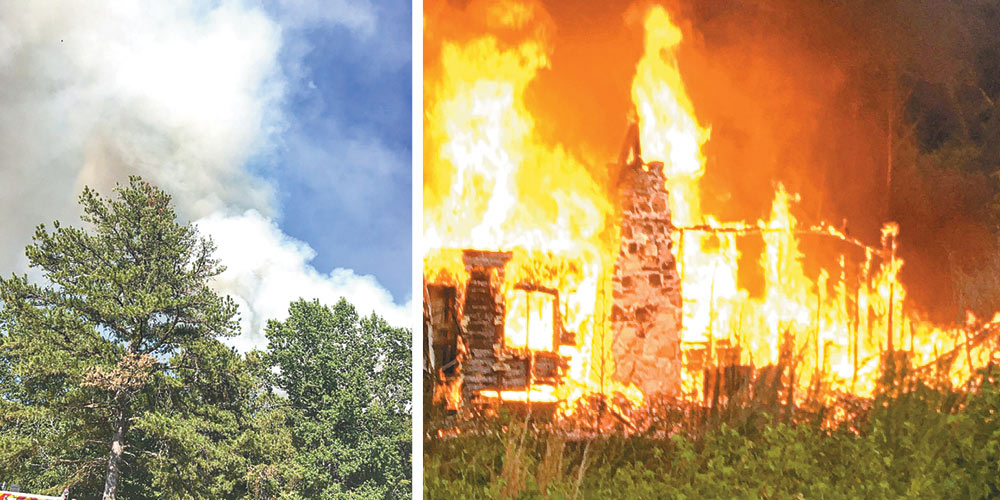 Smoke made battling a blaze difficult by impairing visibility. The house, located near Trinity High School on Highway 94, was a total loss in a fire.