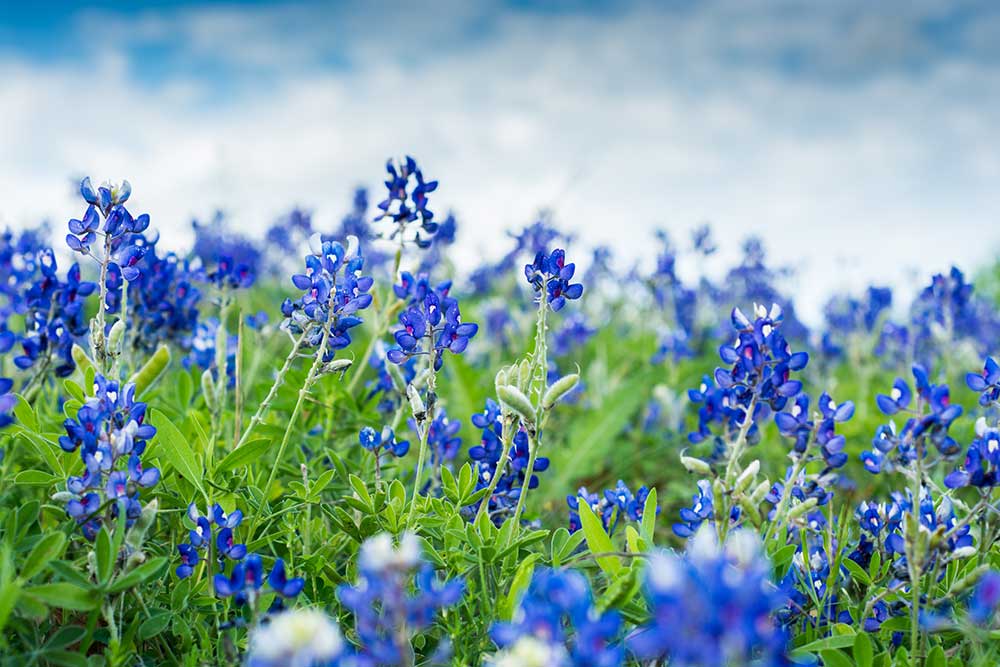 Texas bluebonnet grows in the eastern two-thirds of the state and is the species most recognizable. The species can be abundant in the limestone hills found in the central part of the state. Texas bluebonnet has been planted throughout the state along roadways by the highway department and in many landscapes and public spaces across the state. If you purchase bluebonnet seeds at the store it will most likely be this species.

Sandy land bluebonnet, the less showy cousin, can be found through south and south-central Texas. This species thrives on sandy soils and struggles to grow on clay sites. Sandy land bluebonnet has a pale blue flower compared to Texas bluebonnet which has a deep blue or even purple flower.

Big bend bluebonnet is our tallest species reaching heights of 3 feet with the flower on the upper 4-8 inches of the stem. This species makes it homes in the rugged rocky slopes found in the deserts of Big Bend region of the state. Unlike the previous two species, big bend bluebonnet struggles to survive in landscaping outside of its native range.

Bajada lupine holds the title of the smallest and most inconspicuous of Texas’ bluebonnet species. This species only grows two to six inches tall, and its small reddish-purple flowers can be easily overlooked. This species can be found throughout the Trans-Pecos region of the state in desert grasslands.

Dune bluebonnet and sundial lupine are both perennial plants compared to the other four species which are annuals. Both species reach one to three feet in height and can be very noticeable in their habitat. Dune bluebonnet and its blue flowers are common throughout the central plains states but only reach Texas in the far northern reaches of the panhandle. Sundial lupine has purple flowers and looks the least like our typical Texas bluebonnet. It is common throughout the eastern half of the United States and its range reaches barely into the eastern part of Texas.

Texans love their bluebonnets for their vibrant colors that brighten up roadsides across the state. Texas is not blessed with just one species of bluebonnets, but six species that make up our official state flower.