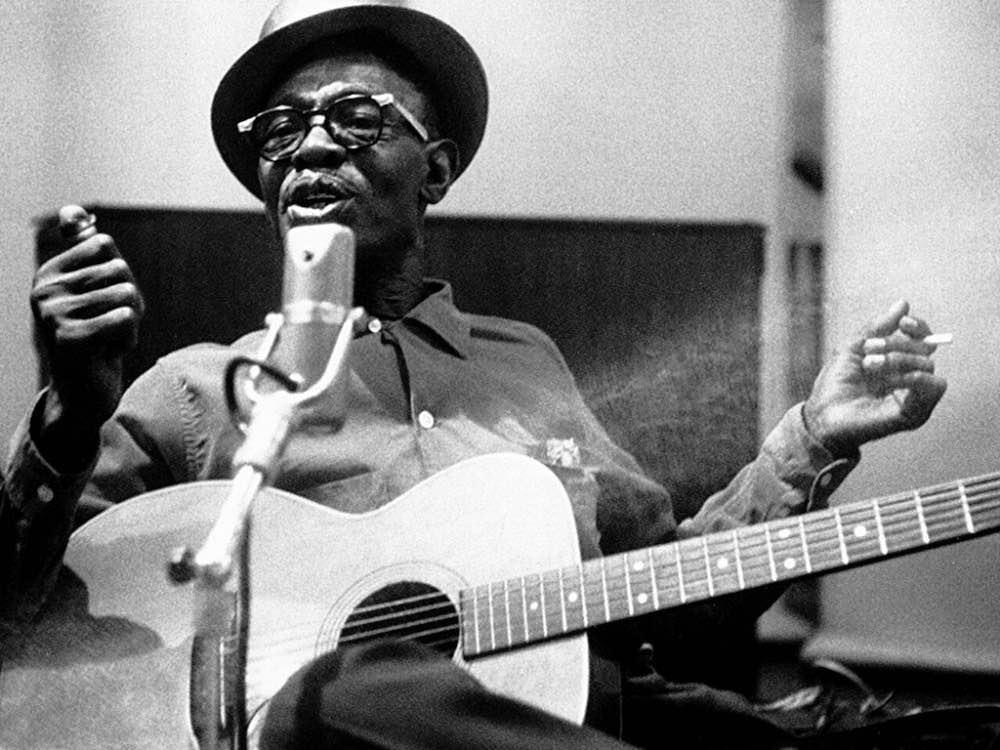 USED BY CREATIVE COMMONS Undated photo of Lightnin’ Hopkins in the studio.

There is a joke about old country bluesmen pertaining to the methodology behind the colorful monikers that so many of them had. You take one-part physical descriptor (or description of a physical infirmity), join that with a middle name consisting of a nickname and pin a presidential and/or distinguished-sounding surname on the end.

The three-name bluesmen who fit that bill (and there are many) include such greats as Blind Willie Johnson, Blind Lemon Jefferson and Hound Dog Taylor, but mention the name Lightnin’ and even those who don’t know anything about the blues know who you are talking about. Lightnin’ Hopkins was so cool, and is so legendary, that mononym status, which has been afforded pop culture figures like Madonna and Cher, also fits for him.

Hopkins, who was born under the name Samuel John Hopkins, on the fifteenth day of March in either 1911 or 1912, hasn’t sang the blues or struck that unmistakable Lightnin’ groove in A major on his guitar on this planet in nearly 40 years, but the influence and iconic status afforded the Centerville native only increases each year.

Record collector and ardent blues fan David Barfield called Hopkins “a true original” and said that his storytelling style and authenticity are matched by few.

“Sam Lightnin’ Hopkins tops the list of the Great Texas Bluesmen. To me, he represents the link between the rural acoustic prewar blues of Blind Lemon Jefferson and the urban electrified postwar blues of Freddie King,” Barfield said.

Barfield also noted how unique and powerful Hopkins’ guitar playing was. “Unlike his more

polished contemporary, T-Bone Walker, Hopkins retained the raw country blues chops he picked up as Blind Lemon’s apprentice. His guitar playing prowess cannot be denied, as he is frequently cited as one of the most influential guitarists of all time,” he said.

Hopkins’ early life reads like something out of a great set of country blues lyrics – from a hardscrabble beginning as the son of a sharecropper who was murdered when Lightnin’ was but three years old, to later exploits of train-jumping and shooting dice and rubbing shoulders with legends like Blind Lemon Jefferson – but his ascendancy as a nationally known artist, as well as the character of Lightnin’ Hopkins, requires a look into his life in an in media res fashion. Like so many other rediscovered blues greats who flourished in the 1960s once they were brought to the attention of hip college crowds, Hopkins had recorded prolifically early on.

When the folk-blues revival took off in the 1960s and record labels were flush with cash to send A&R folks (as well as musicologists and folklorists) deep into the country in search of authenticity to bring to market, those searches turned up dusty old 78s from the 1920s, 30s and 40s as well as word-of-mouth lore that led to such discoveries as Mississippi John Hurt and Son House, from the fertile Mississippi Delta region. Texas, with its rich musical heritage, was naturally a prime picking territory for the great blues-folk talent search of the era and it yielded greats like Mance Lipscomb from Navasota and Leon County’s Mr. Hopkins.

The rise in popularity of the more urbane Chicago-style electric blues by the late 1950s put Hopkins’ acoustic-based efforts out of fashion with the public.

Sam Charters, a music historian and producer, went to Houston in search of Hopkins in 1959. When he found him, he got the bluesman a bottle of gin and a guitar and convinced him to cut a record, or at least that’s Charters’ take on the story, as the liner notes of the eponymously titled LP that was a result of the sessions and released by Smithsonian Folkways, states. 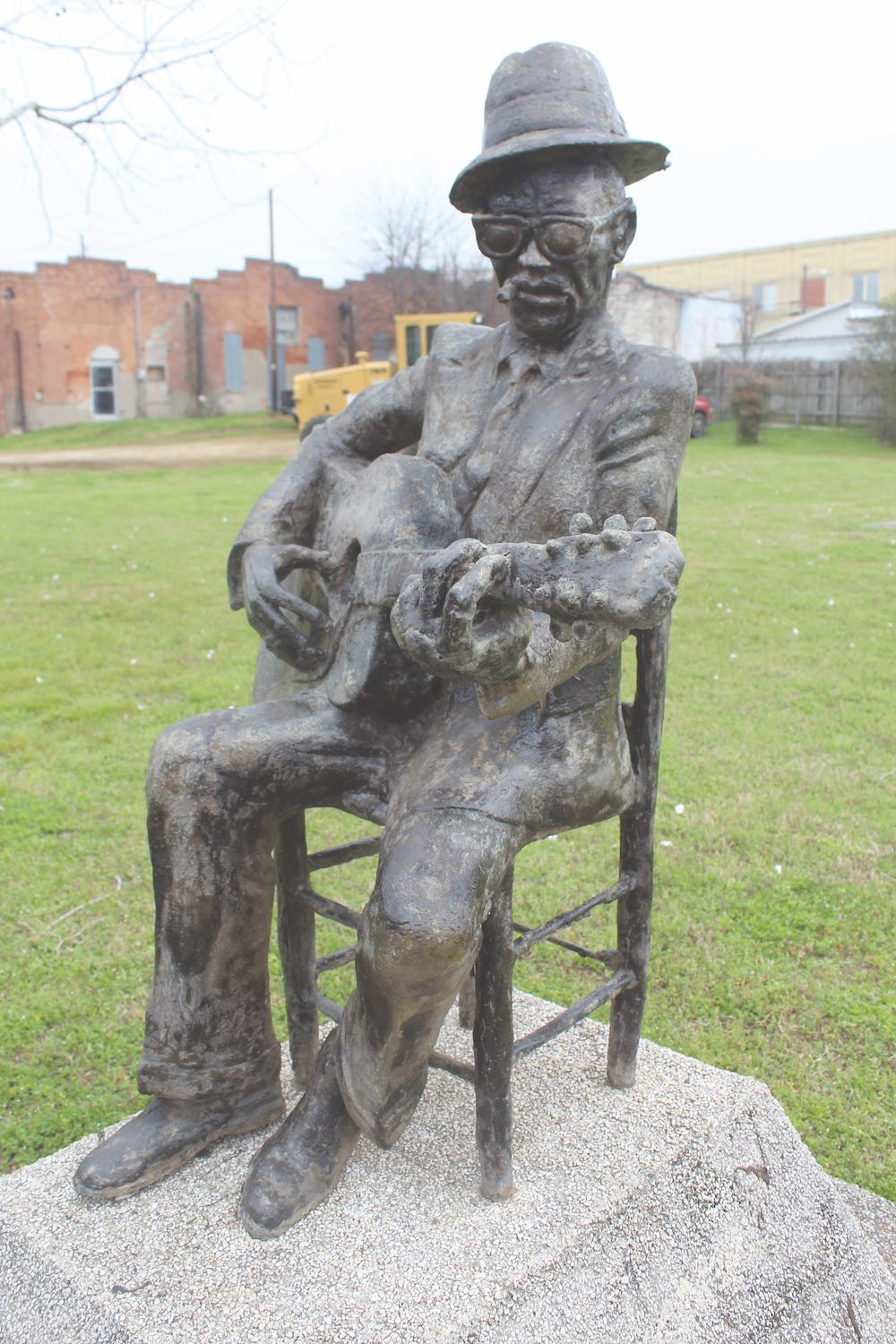 PHOTO BY MEGHAN WHITWORTH A statue of Lightnin’ Hopkins that sits on First Street in Crockett.

According to Alan Governar, who wrote the book Lightin’ Hopkins: His Life and Blues, when Charters tracked down Hopkins, the bluesman had serious drinking and gambling issues, and his guitar was in hock. Charters could tell that it had been many years since Hopkins had even played guitar, when they were preparing to record the album.

On his comeback album, he recorded such songs as “See That My Grave is Kept Clean,” a blues standard composed by his mentor Blind Lemon Jefferson. Along with Hopkins’ originals, the songs endeared his sound and the deep country blues to larger audiences than he’d heretofore known. Barfield said that the raw country blues chops Hopkins picked up under Jefferson’s tutelage is part of what keeps him relevant to musicians and fans to this day, along with his prolific output.

“His vocals and storytelling style possess an authenticity matched by few. All of this plus his huge recorded output are factors in his continuing popularity,” Barfield said.

Governar estimates Hopkins’s recorded output to be between 800 and 1,000 songs. Although he recorded prolifically and for a myriad of labels in his lifetime, many of the first pressings of his singles and LPs are prized among collectors. Barfield said he owns a handful of Hopkins singles, but his favorite is an original copy of “Mojo Hand” with “Glory Be” on the B side. The 45 was released on the Fire label in 1961. “Both sides are great, and it plays like a dream, plus it looks cool as all get out,” he said.

Young blues musicians regularly cite Hopkins’ influence. Alex Westphal, a guitarist and singer-songwriter who now lives in Colorado, but cut his teeth playing the blues in Texas bars, called it “an overwhelming expression of freedom” hearing Hopkins for the first time. “I felt the true blues spirit,” he said.

Westphal, who is a fan of many streams of blues music, said that Hopkins’ country blues style got him more interested in players like John Lee Hooker, R.L. Burnside and Junior Kimbrough. “What I heard previous to Lightnin’ was a strict and predictable 12-bar form that I could not stand,” he said. “Lightnin’ spent as much time as he needed on the one or the four or the five chord as he needed to get his point across, like the blues preacher he was.”

From discovering Lightnin’ Hopkins, Westphal said he could hear his influence in later day bluesmen like Stevie Ray Vaughan. One of Hopkins’ lesser-known works, an album titled Free Form Patterns, which he recorded with members of the legendary psychedelic rock band the 13th Floor Elevators is one that Westphal said is his favorite record Hopkins recorded. He said the album came about at a time when the Elevators’ leader, the mercurial Roky Erickson, was institutionalized after pleading insanity on a marijuana charge and his band was looking for work.

The album also featured the involvement of another Texas music legend in the form of its cover, which was painted by the late country-folk singer-songwriter Guy Clark. According to British music writer Jon Rogers, the collaboration with the Elevators showed the diversity in the musicians’ abilities and cited songs like “Give Me Time to Think” and “Got Her Letter This Morning” as examples of Hopkins’ “blues magic” and the Elevators’ ability to adapt to a different style of playing.

Hopkins’s personal style was the epitome of the cool, swaggering, liquor-swilling country bluesman and his songwriting and vocal stylings were perfect accompaniments to the image, but the guitar style, although part of the overall package, was also its own thing altogether. In his obituary, published in the February 1, 1982 edition of the New York Times, he was referred to as “perhaps the greatest single influence on rock guitar players.” Rolling Stone named him among its 100 Greatest Guitarists in a special issue.

By the time of his death from cancer of the esophagus on January 30, 1982, Hopkins had enjoyed several years of successful recording and touring, of bringing his country-blues sound into places most would have never dreamed it would have ended up. From Carnegie Hall performances to opening for the Grateful Dead and the Jefferson Airplane to playing for Queen Elizabeth II, Hopkins was a first-class ambassador of the blues and of Texas to the world at large.

There are a multitude of explanations as to why the music of Lightnin’ Hopkins remains so vital in 2021. The fact that he was able to translate the often-autobiographical songs that spoke of the experience of a Black man who grew up in poverty in the deep south of the segregation era into the most universal of statements show his true power and the power of great, timeless and authentic music. His rustic sound will likely be enjoyed by eager listeners and by budding musicians hoping to learn a thing or two for generations to come.