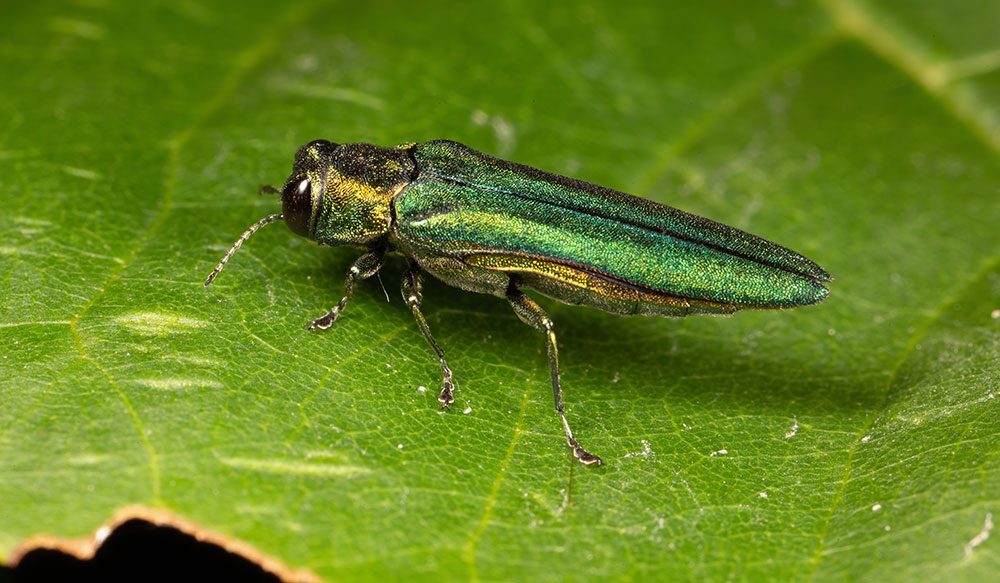 The invasive emerald ash bore has been confirmed in two additional counties this month, according to the forest service.

If you happen to visit a high-traffic area in one of the state’s larger cities, you might come across some folks wearing sandwich boards, such as one sees during tax season or mattress sales. The Texas Department of Transportation has adopted this marketing device to promote its “Be Safe. Drive Smart” pedestrian safety campaign this month.

Pedestrians account for one in five traffic fatalities in the state. Last year, 5,366 traffic crashes involving pedestrians occurred, with 841 people killed. TxDOT is using the highly visible sandwich boards to remind both drivers and pedestrians to follow the rules of the road and watch out for each other. The boards are being worn by members of TxDOT’s street teams.

“Only 1 percent of traffic crashes in Texas involve pedestrians, yet pedestrians account for 19 percent of all roadway deaths,” said TxDOT Executive Director Marc Williams. “That’s because pedestrians lack the protective equipment — airbags, seat belts and bumpers — common to vehicles. To keep our most vulnerable road users safe, we urge motorists to always be on the lookout for people walking. Pedestrians also have the responsibility to be aware of their surroundings and follow the rules of the road.”

The deadline to open a Texas Tuition Promise Fund college savings account for a child younger than 1 year old is July 31, according to the state comptroller’s office. Participants can lock in 2021-2022 tuition and fee prices for their loved little ones at Texas public colleges and universities by establishing an account by then.

The comptroller’s report states: “According to the 2020 edition of Sallie Mae’s Higher Ambitions: How America Plans for Post-secondary Education, planners save two times more for college than non-planners. Planners are also more likely to start investing for college when their child is young, which is associated with less expected student loan debt.”

Contributions to what are known as 529 plans, such as TTPF, are partially exempt from the federal gift tax. Up to $16,000 annually ($32,000 for married couples) can be given without triggering the gift tax.

As the nearly statewide drought shows no signs of abating, wildfire danger continues to spread across the state. The Chalk Mountain Fire in Somervell County and the 1148 Fire in Palo Pinto County caused local officials to urge residents to evacuate. Several lakefront homes were destroyed around Possum Kingdom Lake last week as a result of the 1148 Fire, which involved 457 acres and was about 50 percent contained as of Sunday, according to the Texas A&M Forest Service.

There were 16 active wildfires across the state, the largest being the Chalk Mountain Fire involving 6,705 acres. It was 10 percent contained as of Sunday. A total of 215 counties in Texas now have burn bans in place.

The invasive emerald ash bore has been confirmed in two additional counties this month, according to the forest service. The invasive wood-boring pest is now confirmed in 11 Texas counties, with the addition of Morris and Rusk counties. It has killed millions of trees across 35 states since its arrival in the United States 20 years ago.

“The pest is a major threat to urban, suburban and rural forests as it aggressively kills ash trees within two to three years after infestation,” said Demian Gomez, with the forest service.

Counties where the emerald ash bore has been detected have their ash timber and lumber quarantined to prevent the spread of the pest. The beetle was first detected in Texas in 2016 in Harrison County. Since then, EAB has been confirmed in Bowie, Cass, Dallas, Denton, Marion, Morris, Rusk, Wise, Parker and Tarrant counties.

“This type of sustained economic success is only possible when employers and job seekers have maximum opportunities to reach their full potential, and TWC works hard to support those opportunities,” Bryan Daniel, TWC chairman, said.

Jobs in the oil and gas industry led the increase with 4,900 new jobs, while the construction sector lost 3,000 workers. The state’s unemployment rate dropped a tick to 4.1 percent, down from 4.2 percent in May.

Approximately two-and-a-half years after COVID-19 began to sweep the country, nearly 90,000 Texans have died as a result of the disease, according to Texas Department of State Health Services, with more than 6 million cases reported since 2020. The BA.5 variant is now causing most of the infections, with a rolling seven-day average of 11,905 cases reported daily. The number of lab-confirmed COVID-19 hospitalizations on Sunday in Texas totaled 3,454, according to DSHS, which is up slightly from the previous week.