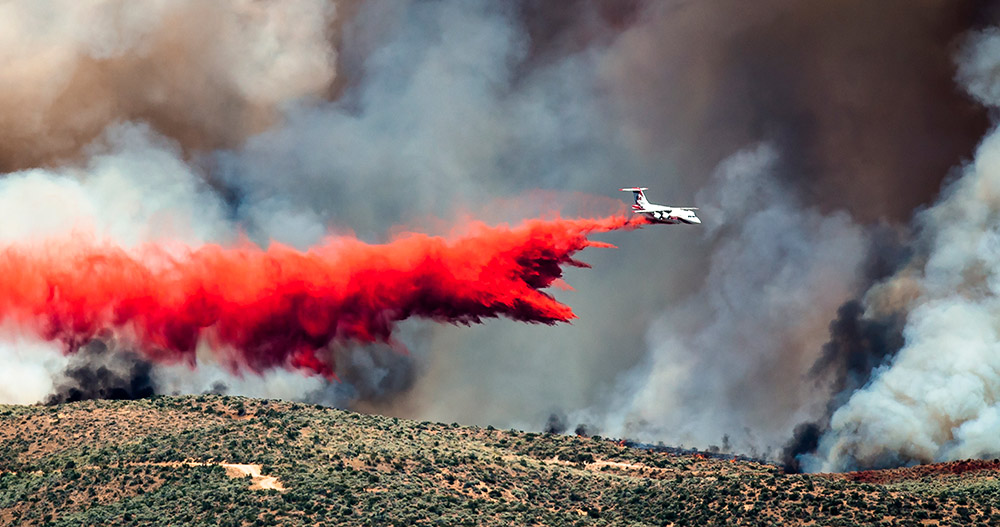 The Austin Airtanker Base will serve as a reload station for aircraft coming and going to wildfires. Courtesy photo

As we cross the halfway point of July, wildfire danger continues to increase across the state. On Friday, Texas A&M Forest Service firefighters responded to 15 new wildfires that burned 651 acres. As of Sunday, there were eight active wildfires; the largest was the Nethery Road Fire in Kimble County, involving an estimated 3,500 acres. It has been 70 percent contained.

The forest service is taking to the air to augment fire suppression efforts on the ground. It has opened the Austin Airtanker Base at the Austin-Bergstrom International Airport. The service has three dozen aircraft mobilized at 17 airports around the state for wildfire response. The Austin Airtanker Base will serve as a reload station for aircraft coming and going to wildfires. It is the only airport in the state set up for what is known as a Very Large Airtanker, or DC-10.

Forest service aircraft can get anywhere in Texas in under one hour. Since being placed in operation in early December, they have flown 4,641 hours and dumped 6.8 million gallons of water and retardant on Texas wildfires.

“This year, we have utilized aviation resources for response in areas experiencing significant wildfire activity,” said Jared Karns, with the forest service. “These aircraft provide support to ground crews and assist in protecting homes as well asother critical infrastructure.”

There are now 212 counties across the state with burn bans — 84 percent of the total number of Texas counties.

Fourth consecutive month with rain deficit
Unsurprisingly, June was warmer and drier for much of Texas, according to Dr. Mark Wentzel, hydrologist with the Texas Water Development Board. At the end of June, drought conditions covered 86 percent of the state, up 8 percentage points from May.
“That all adds up to the conclusion that Texas is in a significant drought, the worst since 2011, but not worse than 2011,” Wentzel wrote.
The drought predictably is having an effect on the state’s water supply reservoirs, which are at 75 percent of capacity, 10 percentage points below normal for this time of year, according to TWDB.

Six ways to save water in summer heat

TDWB is offering six tips on saving water in a state whose population is expected to increase from 29.5 million in 2021 to 51.1 million in 2070 — a 73 percent increase that will put a strain on water supplies. Water conservation is one of the major strategies recommended in the 2022 state water plan. Here are the tips:

•Water landscape in the early morning and at night when winds are calmer and temperatures lower.

•Design a water-wise landscape with native shrubs, trees and grasses. Native plants have adapted to a region’s climate and conserve water more efficiently.

•Follow local watering restrictions. They’re there for a reason: to make sure a community doesn’t run out of water.

•Manage in-ground irrigation systems and check sprinkler heads. Avoid leaving systems on automatic settings that may come on when it isn’t necessary — like during a thunderstorm.

•Consider installing a rainwater harvesting system. In general, for every inch of rain that falls on a 2,000-square-foot roof, about 1,000 gallons of water can be collected. Find out more here: https://tinyurl.com/mryburys.

•Cover your pool or spa when not in use, since evaporation throughout the summer can add up to the equivalent of a pool’s volume.

Two grants totaling $146 million have been announced by the Texas Department of Transportation to fund transit providers across the state, particularly in rural areas.

“This funding is critical to ensuring everyone in Texas, especially in rural areas, has access to where they need to go safely and reliably,” TxDOT Transportation Commissioner Alvin New said.

Transit agencies can use the funds, which come from both federal and state coffers, to cover maintenance costs, buy new buses, build new facilities and expand services to more people, according to TxDOT. The funding is a 65 percent increase over last summer’s funds, in large part due to federal funds from the infrastructure act passed last year.

Democratic gubernatorial challenger Beto O’Rourke raised $27.3 million from Feb. 20 to June 20, outpacing Gov. Gregg Abbott’s $25 million, according to the Austin American-Statesman. Abbott still has a commanding lead in cash on hand, with $46 million in the bank. The O’Rourke campaign has not released how much cash it has on hand.

The O’Rourke campaign said nearly all its donations were made online, at an average of $54. Teachers gave more money than people from any other occupation.

The latest poll indicates the race for governor has tightened, though Abbott still holds a 6-point lead — 45 percent to 39 percent.

With the highly transmissible BA.2 variant of COVID-19 now the dominant strain, the number of new cases continues to rise in Texas and elsewhere. The Coronavirus Resource Center at Johns Hopkins University reported 107,367 new cases in Texas during the past week, up 27 percent from the previous week. A total of 124 new deaths were reported, just slightly up from the previous week. The number of lab-confirmed COVID-19 hospitalizations rose slightly to 3,240, according to the Texas Department of State Health Services.

Nearly 60 percent of the state’s entire population is fully vaccinated, according to DSHS, with 7.178 million Texans also getting at least one booster shot.