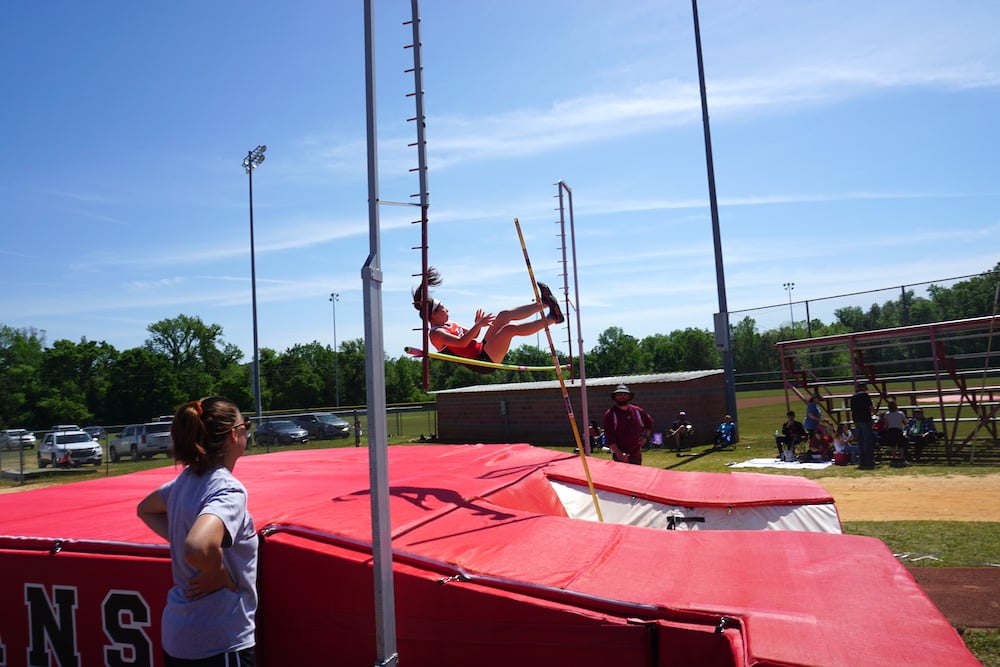 COLDSPRING — The Coldspring-Oakhurst boys and girls track and field programs each qualified seven entries for the Region III-Class 3A Meet this weekend in Waco.

The Trojans finished third in the team standings of last week’s Districts 23/24-3A Area Meet, while the Lady Trojans finished fifth. The meet took place on April 12 at Trojan Stadium in Coldspring.

A trio of first-place finishes kept C-O in the hunt for the area championship. Edward Brown and Curtis Parker, Jr., won the 100 and 400-meter runs, respectively, and the quarter of Parker, Reagan Roberts, Gavin Trejo and Jared Curry won the 1,600-meter relay.

Five of the seven regional-qualifying entries for C-O took place in the field events, including a pair of first-place finishes. Alexis Moore and Amanda Ready won the shot put and high jump, respectively, to lead the Lady Trojans’ charge. 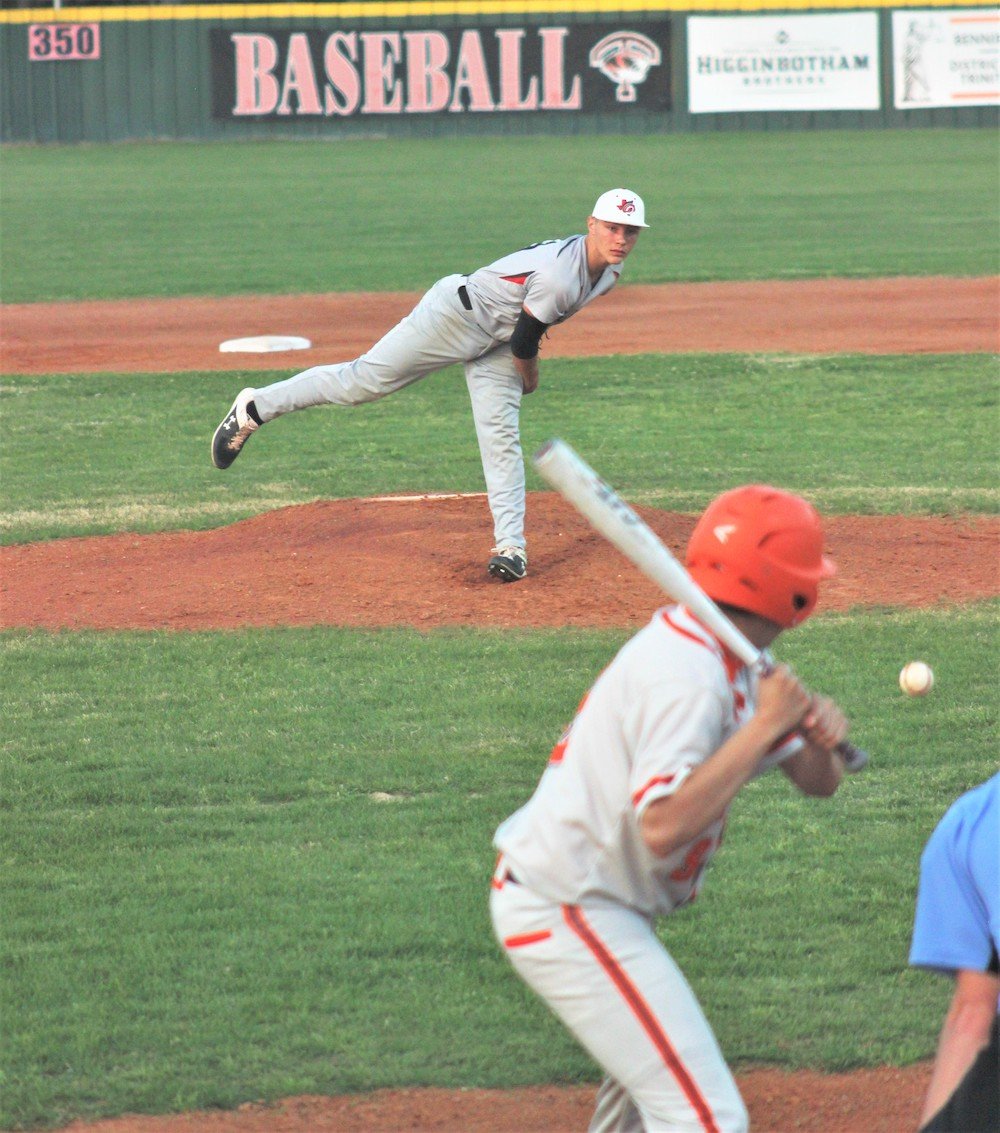 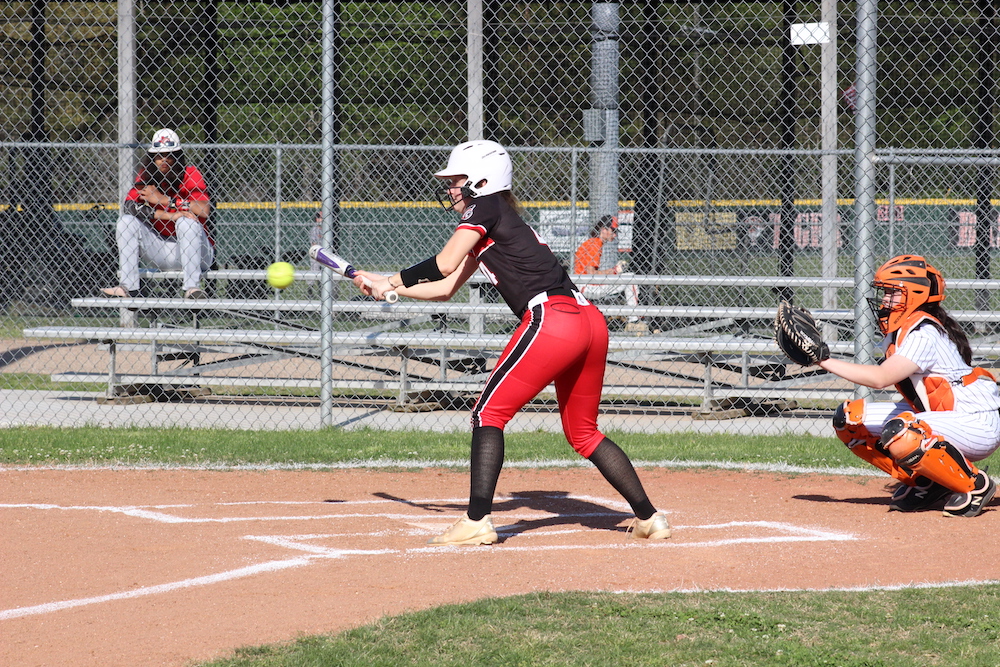 COURTESY PHOTO Coldspring-Oakhurst running back Contavious Parker-Harden (20) set his school’s all-time rushing record with 4,578 yards in four seasons. Parker-Harden is the only player in school history to have more than 4,000 yards throughout his career.

COLDSPRING — Throughout the Coldspring-Oakhurst football team’s history, many great running backs have come and gone.

There was Ray Fisher, who ran for 3,542 yards throughout his career (1990-92), including a single-season record 2,791 yards in 1992 when the Trojans lost to Southlake Carroll in the Class 3Å state championship game. A few years later, Isaac White broke the school’s all-time rushing record with 3,615 yards in three years (1996-98).

More than two decades later, the C-O all-time rushing record has been broken again. Contavious Parker-Harden now has that distinction with a grand total of 4,578 yards in four years.

“When I first came in here, it was looking at the whole picture and I saw some big kids,” C-O coach Ken Stanley said. “When you make a transition into the double-wing, you know you’re going to have to have some guys up front. We had a young man in Liberty that was a lot like Tay and we did very well with him when we put that offense in. I thought Tay had everything that kid had, only Tay was bigger and stronger. Tay was the icing on the cake and the cherry on top. He’s a big kid that has some speed and he made it very easy for me to pull the trigger on this whole double-wing. That made me very excited knowing what I know about the offense. I knew with a kid like Tay that sooner than later we were going to have success. He was a big part of that.”

In the year prior to Stanley’s arrival, Coldspring-Oakhurst was 3-8 in its only campaign under previous coach Jim Bird. Once the coach arrived from Liberty, where he served as the offensive coordinator, he thought he was going to have something special.

“Tay and his fellow seniors were the group that put their cleats in the ground and said they weren’t going to settle for 3-8,” Stanley said. “In two years, they won a district championship.”

For Parker-Harden and his teammates, Stanley was the third coach the team played under going into his junior season. Mark Byrd was the coach Parker-Harden’s freshman year and Bird coached him as a sophomore.

Both Byrd and Bird had one thing in common — the spread offense. But Stanley proved to be an answered prayer for the school running back.

Parker-Harden recently committed to the University of Mary Hardin-Baylor. He also talked a little bit about his running style.

“I ask for the ball on the first play of the game because on that first play I’m going to give them everything that I’ve got,” Parker-Harden said. “Pretty much every team that we play, I’ll look at them and I’ll start laughing because if I want it I can get it. I don’t let one guy tackle me. I want all 11 guys tackling me. Coach Stanley and I talked all year about how I’ll never let just one guy tackle me. If I allow just one guy to tackle me, then I don’t deserve to be in my spot.”

Stanley talked about a particular play when the Trojans met Diboll in the regular season finale. The play was pivotal in C-O’s 20-12 victory that clinched the district championship.

“We had a critical moment in our season against Diboll where we were on our own 30-yard line and it was fourth-and-two,” Stanley said. “It would’ve been real easy to punt right there, but we went for it. If they can stop us, I’ll tip my hat to them and put our defense back on the field. The Diboll coach called a timeout before that play and tells his team, ‘you know No. 20 is going to get the ball.’ They knew it, we knew it, and everybody in the stands knew it that Tay was going to get the ball on that play, and we still got the first down.”

When Parker-Harden was in seventh grade, Bryan Barbay was the Trojans’ head football coach and athletic director. Barbay employed another run-oriented offense — the wing-T.

“The double-wing is actually a lot different than the wing-T except for the misdirection,” Stanley said. “In the wing-T, you have a lot of double teams up front and a lot of buck sweep with pulling guards and trap. The double-wing is more of a gap-control offense and it kind of lends to all offenses now where you have a power/counter scheme. The beauty of the double-wing for us is we feel like you have to balance on us, and we can always put one more man on you. Our quarterbacks have to be blockers. By having that extra blocker, running that tunnel sweep gets us over the top. We also emphasize the weight room and we get guys who can get good technique and move on people. We want two-and-a-half yards a play. When we get to fourth-and-two, we’re going to go for it. The fullback in our offense is primarily a blocker. They block on our tunnel sweep and counter play. We get a kid who’s gritty and tough hat fullback.”

One thing that helped the Trojans — and Parker-Harden — during the last two seasons was fellow senior Greg Terry. With Parker-Harden’s power style and Terry’s finesse, C-O gave opposing defenses headaches.

“I like to get a kid like Tay on one side and a quick, slasher type runner on the other side,” Stanley said. “It gets down to if we’re getting 6, 7 or 8 yards on our tunnel sweep play, I’m going to keep running that play. When a defense does something to adjust, then we hit them out the backdoor with our slasher. It was a lot of fun with these guys. They made it easier to call the offense. A lot of teams tried to make us beat them with someone other than Tay. Greg Terry in his own right had great seasons. Defenses had to respect him on the counter and it kept Tay honest. It was a good combination.” 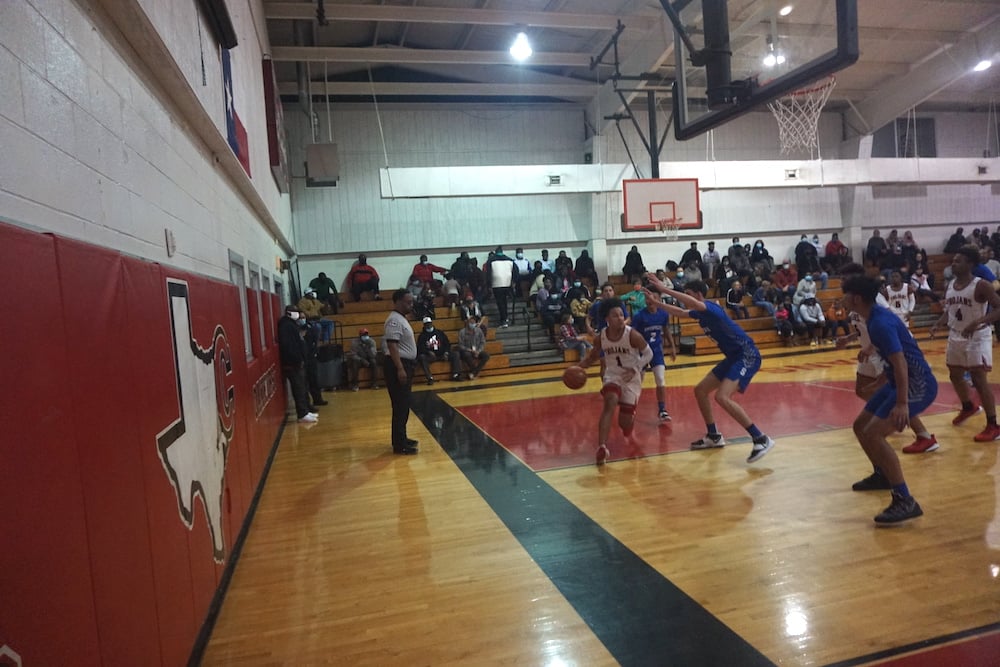 JASON CHLAPEK | SJNT Coldspring-Oakhurst guard Duke Lawniczak (with ball) dribbles in the paint against Shepherd post Bradley Davis during a game between the Trojans and Pirates earlier this season.

COLDSPRING — The road to San Antonio begins tonight and tomorrow night for the Coldspring-Oakhurst and Shepherd boys basketball teams, respectively.

The Trojans, defending Region III-Class 3A champions, face Van Vleck at 6:30 p.m. today at Friendswood High School in a 3A bi-district contest. Coldspring (16-3) is the runner-up out of District 23-3A.

The Pirates begin their playoff journey Friday when they face Lumberton at 7 p.m. at Warren High School. Shepherd (13-13) tied for third with Hamshire-Fannett, but is the No. 4 playoff seed out of 21-4A.

The Trojans and Pirates are both limping into the postseason. Coldspring lost two of its last three contests, including a 58-54 setback at the hands of Anderson-Shiro in last week's regular season finale.

Shepherd has lost three in a row, including a 65-40 defeat against district co-champion Huffman Hargrave in last week's regular season finale. Bradley Davis and Dillen Johnson led the Pirates with 13 and 10 points, respectively. 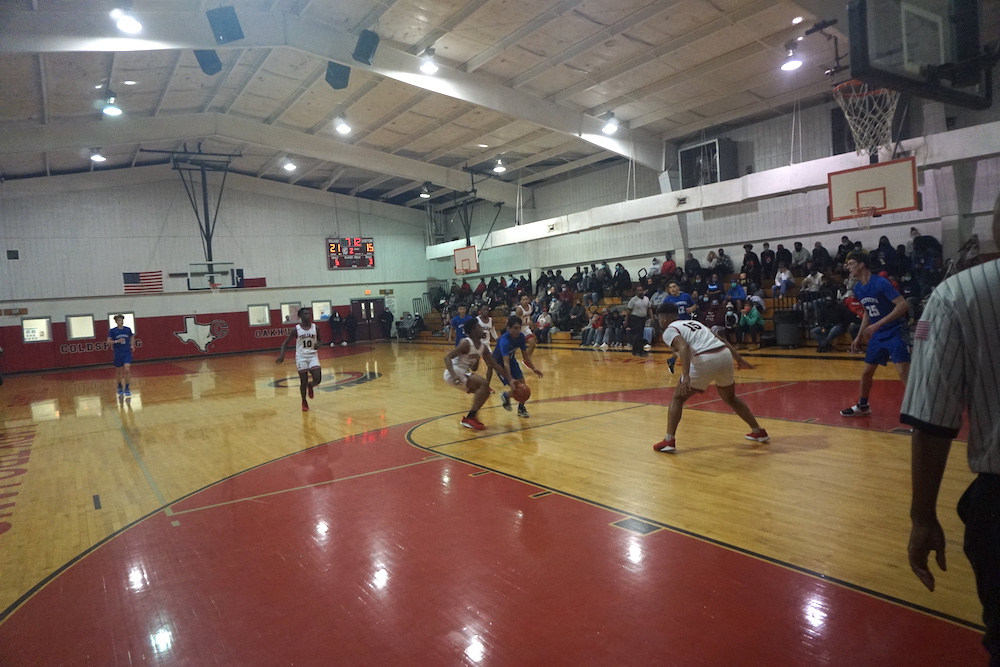 JASON CHLAPEK | SJNT Coldspring-Oakhurst guard Jared Curry (left) and Shepherd guard Christian Castillo chase down a loose ball during a game between the Trojans and Pirates earlier this season.