CLEVELAND — In the final day of the Cleveland Varsity Tournament, the Coldspring-Oakhurst Trojans Varsity took the 9-5 win over county rival Shepherd.

The Trojans took the lead late in the game on an error scored one run for Coldspring-Oakhurst Trojans Varsity.

Luke Monroe led things off on the mound for Coldspring-Oakhurst, pitching three innings and allowing four runs on four hits and striking out three.

Monroe, Shawn McNew and Cole Woodruff each collected one hit to lead on offense.

On Friday, the Trojans Varsity fell behind early and couldn’t come back for an 11-1 loss to Cleveland.

Coldspring-Oakhurst struggled to contain the high-powered offense of Cleveland.

Nolan Beaver pitched two-thirds of an inning, allowing one hit and seven runs. He was followed by Lincoln Payne, Tristan Ezell and Zach Hamilton, each trying to contain the Cleveland offense.

Cole Woodruff went 1-for-2 at the plate to lead hitters.

Tristan Ezell went 2-for-3 at the plate to lead hitters.

Earlier on Thursday, the Trojans waited till the fifth for the offense to give them a 9-6 win over Shepherd.

The game was tied at four with the Trojans batting in the top of the fifth when Zach Hamilton singled on a 0-1 count, scoring one run.

Shepherd scored four runs in the second inning, but Coldspring-Oakhurst Trojans Varsity still managed to pull out the victory.

The Trojans got things started in the first inning when Easton Dean tripled on the first pitch, scoring one run, and in the top of the third inning, tied things up at four when Brendan Ogletree was hit by a pitch, driving in a run.

Dean allowed five hits and six runs over 4 1/3 innings, striking out one.

Hamilton and Dean each managed three hits to lead the Trojans, and Barton led the way with two steals.

The Pirates lost all four games at the Cleveland Varsity Tournament this weekend.

On Saturday, Shepherd lost to Coldspring-Oakhurst 9-5; on Thursday, the team lost 8-4 to Rosehill Christian and 14-3 to Tarkington.

On Thursday, the Pirates lost the opener to the Trojans 9-6.

Head Coach Josh Meeker said his two top producers for the weekend were Hayden Washburn, who went 7-11 at the plate with 2 doubles and a triple, and Tristen Cullum, who was 6-13 with 2 doubles.

The team opened with a 6-2 loss to Humble and a 7-1 loss to Coldspring-Oakhurst, and though they played extremely well, they to Cleveland 1-0 on Friday, Martin said.

Offensively, Aaliya Jamie had a stellar performance, with 2 singles and 3 triples.

During the Cleveland Tournament, The Lady Trojans lost 6-0 to Orangefield and 7-1 to Shepherd on March 4, but downed Cleveland 4-1 on March 5.

Coldspring opened tournament play on Thursday with a 14-5 loss to Tarkington and a 4-3 loss to MacArthur. 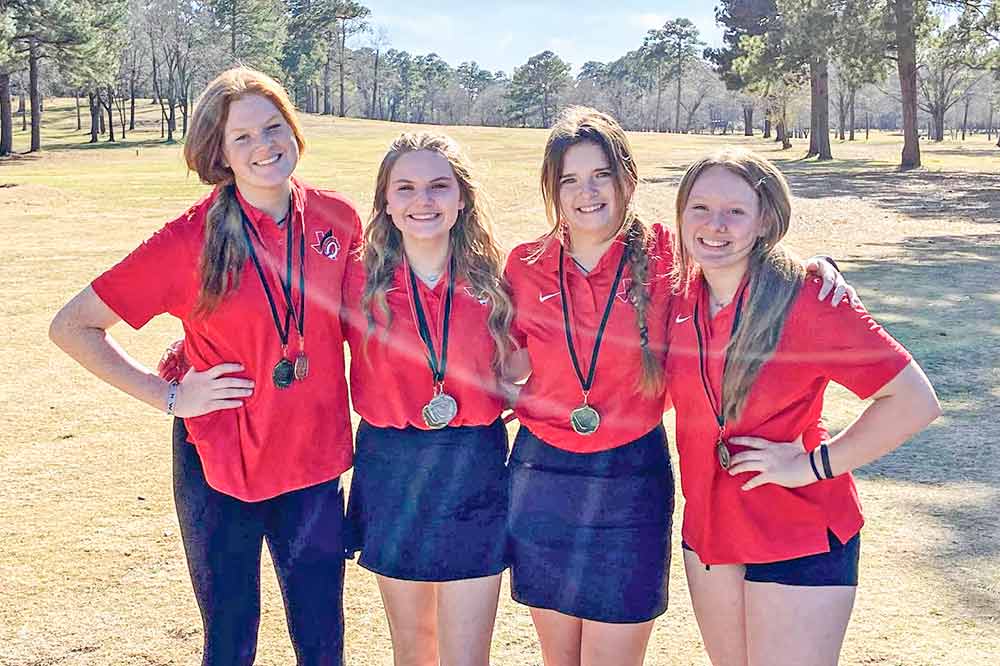 The Lady Trojans opened softball season on Valentine’s Day with a 14-4 win over Big Sandy.

Haylee Rosales hit a three-run homer to spur the team to victory.

Following a great opener, Coldspring-Oakhurst dropped two games, losing to Huntington 10-1 on Feb. 15 and 18-2 to Lufkin on Feb. 17.

The Lady Trojans put the second win on the tally sheets with a 5-1 win over Kirbyville 5-1 on Feb. 17.

Ashney Minor pitched great on the mound and Shaelynn Price went 2-for-3 at the plate.

The Shepherd Lady Pirates lost a 14-0 blanking to Huntsville on Feb. 15, and then posted 7-2 loss to Elkhart on Thursday during the Madisonville Tournament.

Shepherd then fell to Onalaska 15-7 on Saturday.

The Cleveland Boys powerlifting squad came in 10th at the annual Highland Powerlifting Meet on Saturday. 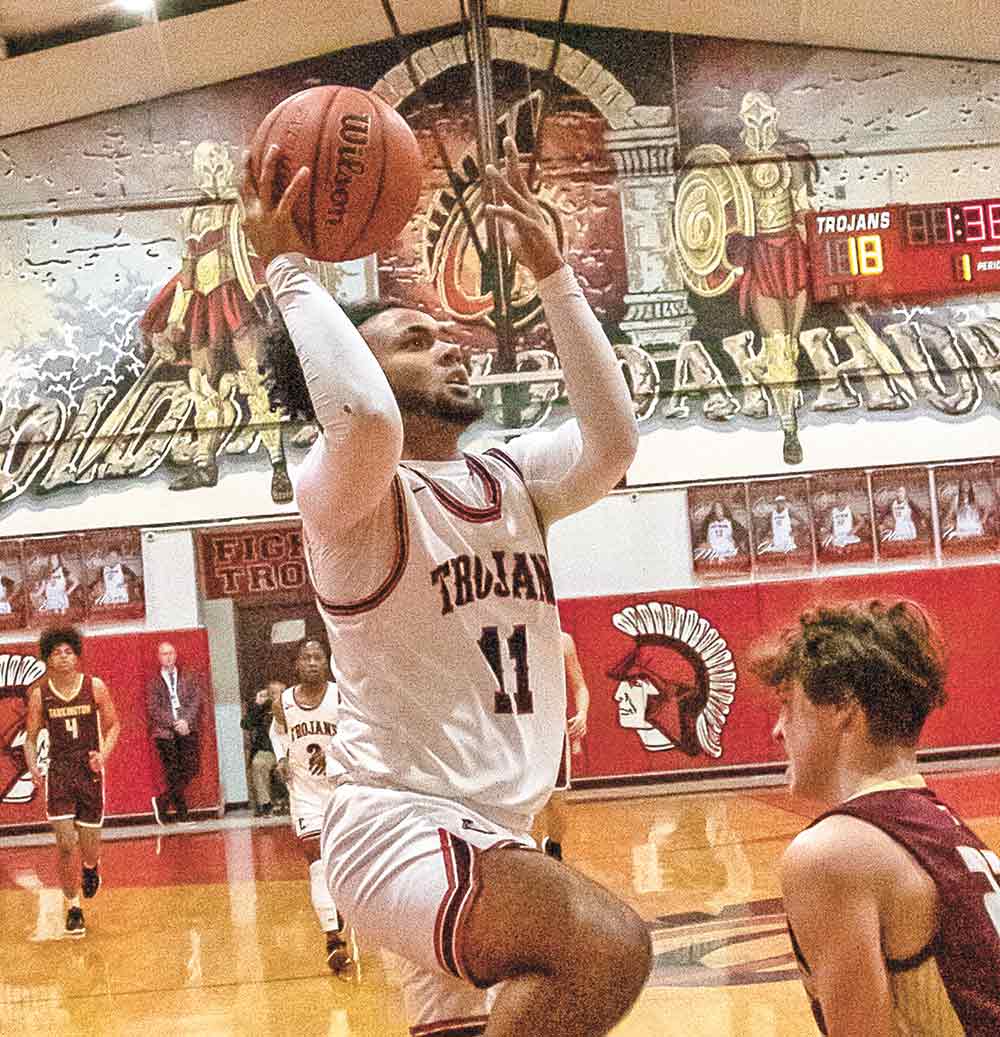 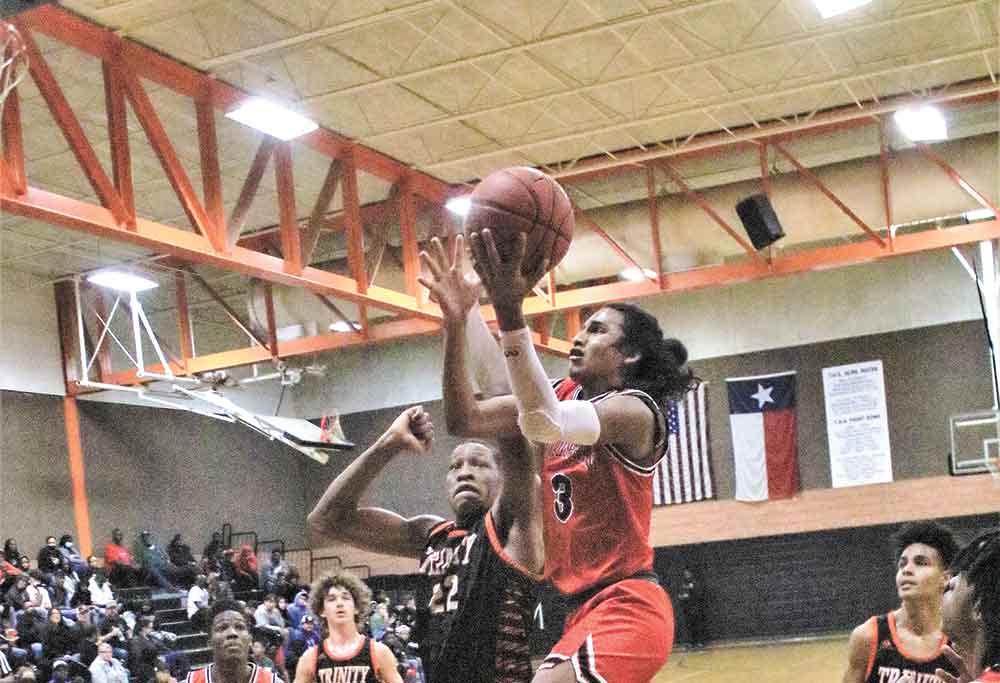 TRINITY — It was rough, and it was physical, and at one time, the COCISD Trojans were behind, but the tough got going, and the Trojans downed district rival Trinity 61-51 on Feb. 1.

Coldspring was down 23-15 at halftime, a place it has been in some time, according to Head Coach Greg Devers.

Leading scorers were Luke Monroe with 27 points, Chris Harden with 13 points, and Cam Shaw-Rucker with 11 points, 6 steals and 5 rebounds.

K.D. Bookman had a good overall game with 7 points, 7 rebounds, 3 assists and 5 steals.

SOUR LAKE — The Shepherd Pirates were outclassed by Hardin-Jefferson 94-28 on Feb. 1.

Top scorer was Tristen Cullum with 10 points and 8 rebounds.

Meanwhile, the Lady Pirates were downed 113-33 by the Hardin-Jefferson Lady Hawks.