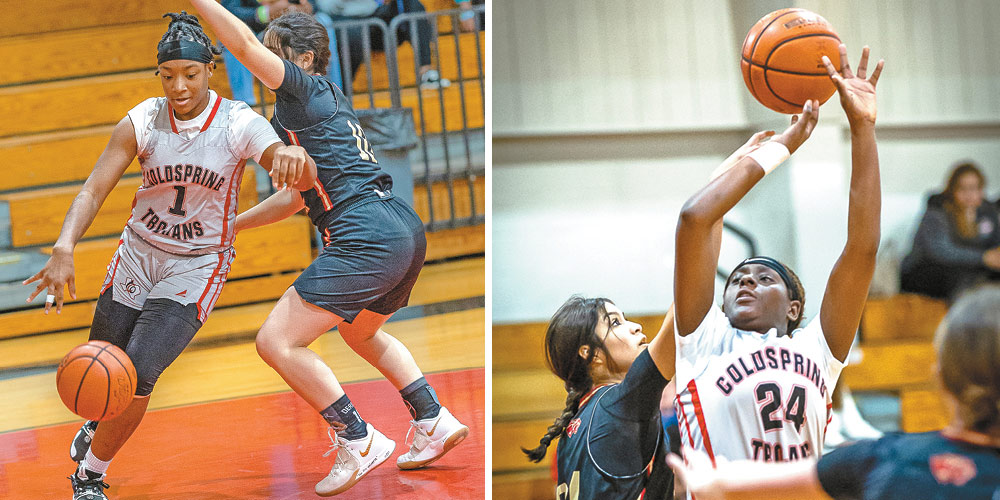 Efreauna Baines (No. 1) drives the paint for another 2 points against Creek on Wednesday. Shantel Goffney (No. 24) takes a jump shot over a Creek Defender during the first quarter of the Wednesday basketball game. Photos by Charles Ballard

COLDSPRING — What looked to be a washout against a big 6A Team Caney Creek ended up in a very close 55-54 loss for the Lady Trojans.

Coldspring posted 26 points the first half against Creeks single-digit 7. It appeared the Lady Trojans were going to take Creek to the cleaners, but the tide changed in the second half. Creek posted 17 points in the third and 22 points in the fourth quarter against Coldspring’s 18, meaning 39 points went unanswered by the Lady Trojans.

Coach Monique Whittaker said, “This game is in preparation for the district match up against Crockett on Jan. 3.”
Mariah Major had 11 points, Shantel Goffney had 16 points, and Lilly Williams had 6 points.

The Pirates competed in the East Chambers Tournament over the weekend and posted three losses and two wins.