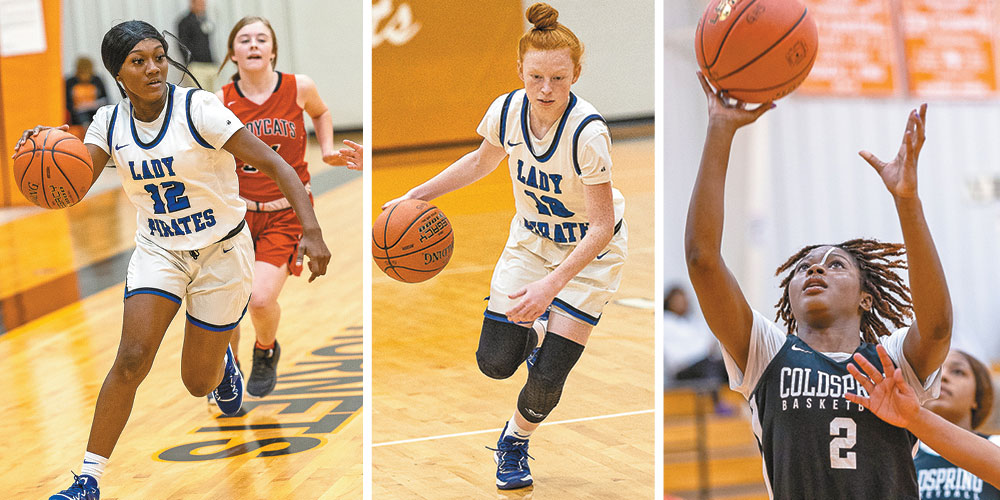 Tiana Clark (No. 12) moves the ball up court quickly against Hull-Daisetta during the Goodrich Christmas Basketball Classic. McKayden Nelson (No. 10) drives the ball up the court against Hull-Daisetta. Brianna Shaw-Rucker (No. 2) drives the lane with a very nice lay-up during Tuesday night’s non-district game against the Goodrich Lady Hornets. Photos by Charles Ballard

GOODRICH — The Lady Pirates won the consolation championship at the Goodrich tournament on Saturday.

On its way there, the team lost to Hull-Daisetta 61-59 on a last-second shot.

The Lady Pirates struggled the first half to hit anything but after the half it was a different story, fighting back to within a few baskets during the third quarter. In the fourth quarter the Lady Pirates tied it up at 59, and almost managed to force an overtime game.

Hull-Daisetta launched a shot just inside the 3-point line in the last second of the game, and players watched as the ball rolled around and finally falling in.

Top scorers were Grace Panos with 23-points, Tangela Yates with 12 points and Tiana Clark with 8.

The Lady Trojans came in third place in the Goodrich Tournament, downing Broaddus 61-34.

In the Spurger game, Brianna Shaw-Rucker had 12 points, Ella Phillips had 16 points, and Shani’ya Goffney had 6 points.

Head Coach Monique Whittaker said, “We want to use this time to get ready for district play. The win was good, but it is the fact that we want to learn from our mistakes.”

Coldspring looked very focused and had a plan of attack.

Whittaker said the game was a good preparation for the Goodrich tournament.

Top scorers were Ella Phillips with 25 points for the night, followed by Shantel Goffney with 14 points.