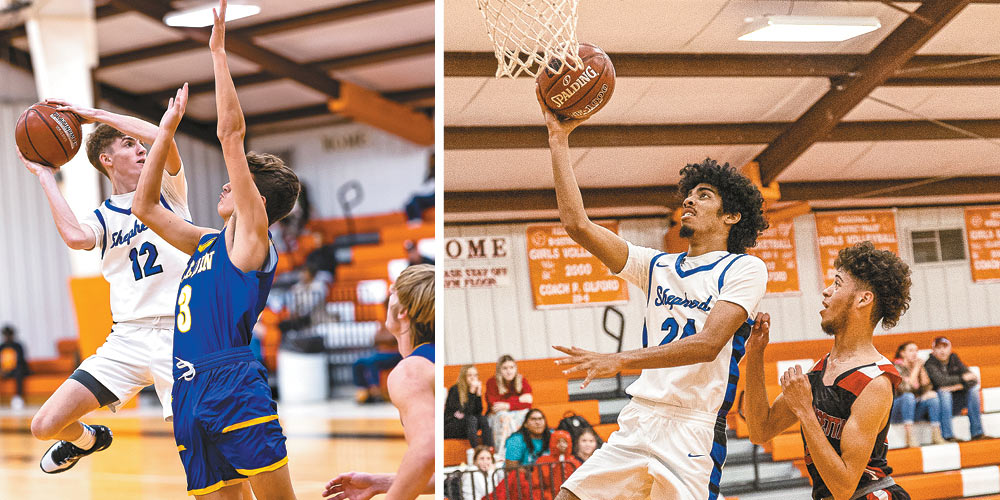 Trey Siddall posts a shot from just inside the 3-point line against Hardin. Tristen Cullum takes the ball to the hoop over Hull-Daisetta to secure the win and advance to the second round. Photos by Charles Ballard

GOODRICH — The Shepherd Pirates beat all comers to end up champions of the Goodrich Christmas Classic on Saturday.

The final win was a 68-43 drubbing of the Founders Christian Falcons.

Top scorers were Tristen Cullum with 24 points and 13 rebounds, Jesse Valerie with 18 points and 2 rebounds, and Payton Burton with 10 points and four rebounds.

Braydon Mettlen contributed 10 rebounds along with his 8 points.

To reach the finals, the Pirates downed the Hardin Hornets and the Hull-Daisetta Bobcats.

Shepherd won the tilt against Hardin 76-45, returning strong after a slow start.

Head Coach Jeremy Bennett said he told the players to “keep plugging away and play hard. We started out slow just like yesterday but just keep working your position.”

Shepherd stayed close during the first quarter trailing by three but opened up in the second quarter went in at the half with a 33-26 lead.

The Pirates held the Hornets to only 7 points during the third quarter while they posted 21; the Hornets lost focus, being called for two technical fouls that shifted momentum to the Pirates.

Top scorers were Valerie with 31 points, including three 3-pointers; Mattlen had 15 points and 12 rebounds; and Burton had 14 points. Cullum pulled in 13 rebounds in the win.

In the opening round, Shepherd beat Hull-Daisetta 65-62

Valerie had 12 points, Mettlen had 8 points, Burton had 9 points, and Cullum had the hot hand, tossing in 24 points.

Bennet said Shepherd had a very slow start, as with all games during the tournament.

“I did not say anything special to the boys at the half but ‘play your game’, and that is what they did,” he said. “They came back with a much better focus and a desire to win.”

During the Goodrich holiday tournament, the Coldspring Trojans lost its opener to Anahuac 49-39. That was followed by a 61-34 win over Broaddus and a 48-46 win over Brookeland.