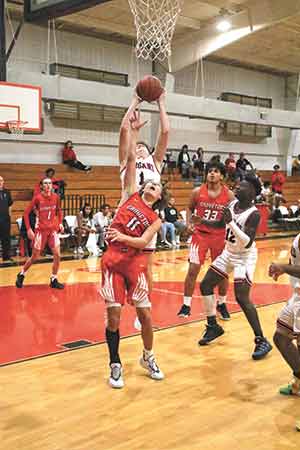 Trojan Cayden Barton pulls down a board during the 86-22 home win over Groveton on Nov. 23. Photo by Tony FarkasSpecial to the News-Times

The Trojans have posted 80-plus points in each of its pre-district games — Buffalo and Groveton — starting the season in good fashion.

Coach Greg Devers said that even with the scoring gaps, his team still is working all the kinks out.

CLEVELAND — The Shepherd Pirates dropped an away game 72-22 to a more experienced Cleveland Indians team on Nov. 23.

Top scorer for the Pirates was Tristen Cullum with 18. Cullum also led the team in rebounds, blocked shots and steals.

SHEPHERD — The Shepherd Lady Pirates split a pair of games over Thanksgiving Break.

Grace Ramos and McKayden Nelson led the way in scoring.

The Lady Pirates will travel to Corrigan for a varsity game on Tuesday.